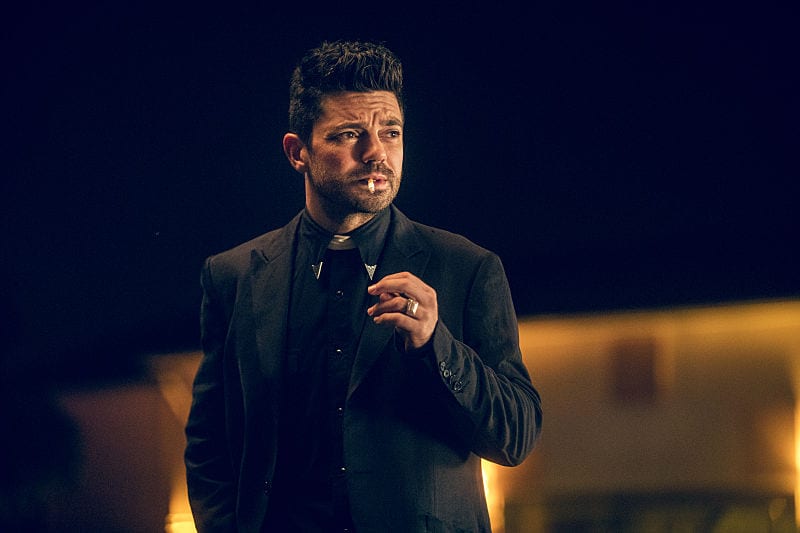 You know what’s been missing from television lately? Weirdness. Just straight up, honest to God, weirdness. Now I suppose you could argue that Twin Peaks is a weird show, and I’d love to be a part of that discussion but I’ve never watched (*gasp* It’s on my summer binge list) but even with my limited knowledge of Twin Peaks, I don’t think it’s weirdness compares to what’s going on over on Preacher. The beauty of Preacher’s weirdness is that it presents to us these incredibly outlandish things, like space demons or an Irish vampire chopping up angels in a church, but it presents them in a manner that not only makes them seem normal but plausible as well. Preacher is not afraid to throw pretty much anything our way, like angels who make a living in casinos killing themselves or bandits who siphon gas through intestines (two things that happened in the premiere) and expects us to either be okay with it or to move on with our lives. For those of us who are sticking around because we’re “okay” with it, man, are we in for a treat.

Preacher kicked off its two-night premiere by starting what aims to be the best road trip since Road Trip, in grand fashion (I know that is in no way the best road trip story but it was easy to plug and maybe moderately funny… maybe? Someone chuckled). For starters, I’ve been to a lot of bars and sang a lot of songs, but that might be my favorite use of “Come on Eileen” ever. For serious. Nothing like kicking things off with a car chase filmed in a grindhouse manner, while cheesy music from the 80’s plays and your main characters sing along. Preacher does an excellent job of balancing its humor, however dark it may be, with its action and having the gang run out of gas was a nice way to allow the audience to know that this season is going to be bananas (b-an-an-as… I’m sorry). If last year was the prequel to the comic with small town hijinx and characters searching for redemption than season two looks to be a whole different animal filled with extremely violent action and a large landscape.

What makes this particular road trip different than most is that our core characters have nothing to return to. In the majority of road trip stories the characters eventually make it back home changed and filled with new life lessons, but what do you do if home literally exploded? I like the dynamic it adds to this narrative as there is literally nothing handcuffing Jesse, Tulip, or Cassidy from their pursuit of finding God, who has been frequenting a strip bar for it’s… jazz? Yeah, you read that correctly. 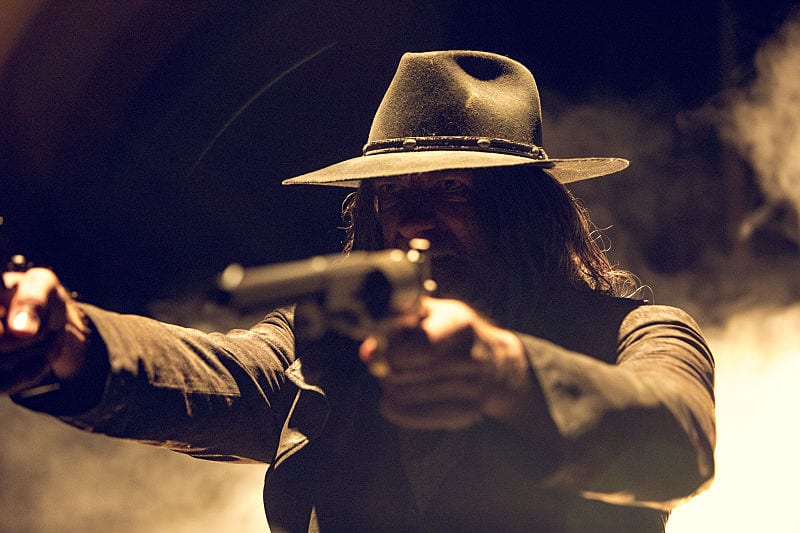 And that’s really our big mission for the season… finding God. Sounds like an easy task, right? I mean people have only been searching for him/her their entire lives. But sure, if you follow the jazz holes long enough then you’ll be sure to find God eventually. Clearly, he/her just wants to get their Miles Davis on, but as easy as this task sounds, the season would be all types of boring without some conflict and luckily we have the Saint of Killers (not a myth) to liven things up. A clear understatement as the scenes involving the Saint of Killers were all types of intensely violent. His introduction to the group as he systematically decimated those police officers (you see that dude’s head explode?!), the removal of tongues from seemingly innocent gas station attendees, destroyer of dogs and doors, car accident survivor, and sympathetic angel killer? That’s right, Fiore, who has been moonlighting as a novelty act in a casino since returning from hell (loved seeing that Breaking Bad scenery again which could further prove the theory that all AMC shows are connected) where he kills himself and regenerates over and over again much to the delight of his audience. Little do these bloodthirsty savages know that Fiore is in some serious pain and misses his best friend, DeBlanc, the angel that died in hell last season. Luckily the Killer of Saints finally puts him out of his misery, his bullets are legit, and we now have lost all our ties to first season characters who aren’t Jesse, Tulip, or Cassidy.

And that’s where the heart of the show resides. The relationship between Jesse, Tulip, and Cassidy makes this whole weird adventure worth watching. The chemistry between Dominic Cooper, Ruth Negga (who has an Oscar nod ya’ll), and Joseph Gilgun is hands down my favorite part of this show. There’s the love/hate relationship between Jesse and Tulip. Clearly, they love each other but does that mean that they’re good for each other? There’s the fact that they both use Cassidy as a middle man. At different times either Jesse or Tulip use Cassidy as a sounding board for their inner monologue. The fact that Cassidy holds secrets, like what happened to Tulip in the hotel room and the tiny little nugget of sleeping with Tulip in season one, is sure to make for interesting television later in the season.

The two-night season premiere kicked off the second season of Preacher on a high note with a season that looks like it’s going to be all types of crazy town banana pants. The group is now heading to New Orleans, the hotbed of jazz, with the Saint of Killers hot on their tracks. It’s should lead to some interesting storytelling now that we know that the use of Genesis is like a GPS system for the Saint of Killers. How many times can Jesse prevent himself from using his space demon voice? Oh, temptation, such a religious kick in the goods. 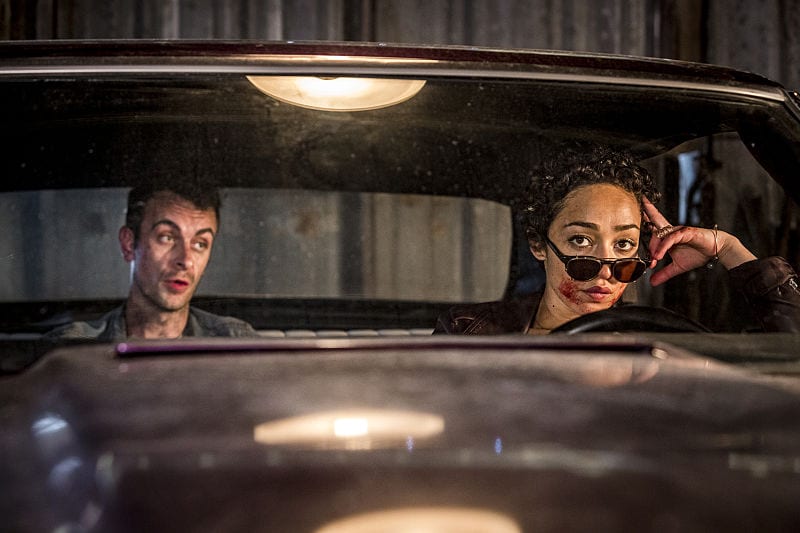 What did you think Geeklings? Are you excited about season two of Preacher? How long before the Saint of Killers catches up with the gang again? Is God actually in New Orleans? What’s up with the dude with the bad cell service who attacked Tulip? How long before the love triangle makes Cassidy snap? Sound off in the comments below or you can find me on Twitter @iamgeek32. Can’t wait to hang with you guys this season!