If you’ve been feeling that your regularly scheduled television programs haven’t been making you paranoid enough then fear not as Mr. Robot returns tomorrow night to USA to make you question everything. Praise be to the television Gods as I have missed Mr. Robot and it’s mind-melting capabilities like you wouldn’t believe.

When we last saw Elliot he was bleeding out on the floor from a gunshot to the gut courtesy of Tyrell Wellick. That’s right, Tyrell Wellick who was missing the majority of season two returned just in time to implement Mr. Robot’s Phase Two and reluctantly shoot Elliot in the stomach. It wasn’t without cause though as Elliot after learning what Phase Two was, the destroying of an E Corp building housing tons of paper records at the cost of civilian lives, tried his best to call things off putting Tyrell’s whole season two existence in limbo as he spent all that time off camera prepping for this exact moment. Seeing his idol change his mind was difficult to watch but Mr. Robot anticipating that Elliot would panic put in the gunshot backup plan. Thanks, imaginary personality! You’re a real pal.

We know that Elliot isn’t dead from the phone call that Angelia received to close the episode but it doesn’t mean that his world isn’t turned upside down (not a Stranger Things refrence I swear). For starters, we don’t know if Phase Two was implemented or not. I’m under the assumption that Mr. Robot and Tyrell carried out the plans and the blackout seen in the background after Angelia’s phone call would imply that either the brownouts caught up with the city or maybe an explosion took out a major power grid. I’m sure this will be one of the answers the show looks to address rather quickly. It’ll be tough to keep the bombing of an E Corp building quiet.

Even if the plan was carried out where does Elliot fall in this new world order that F Society is trying to create? It seems that Mr. Robot was working behind his back the entire time, much as we suspected, and he’s kind of out of the loop. Will Tyrell take charge of F Society now since Elliot has shown that he isn’t capable of leading anymore, I would beg the questions of was he ever capable, but again what does that mean for Elliot? I’m sure Tyrell will keep his mentor on but at what capacity? Wouldn’t he be more of a liability at this point or does Tyrell shrug Elliot’s behavior up to immense pressure at trying to pull off the biggest revolution of all time? And does Elliot even want to be a part of the revolution anymore? I’m starting to believe that maybe, just maybe, he’s having second thoughts. Could he be both the hero and the villain of the show?

Other things to keep an eye on are Angela who has either been recruited by F Society or the Dark Army. Last season, before her phone call, Angela and Elliot had a good-bye on the train with a dash of kissing but is it possible that F Society or the Dark Army can use her as leverage now? What better way to keep Elliot in line than threatening the one thing he loves most in this world? Outside of his sister of course. 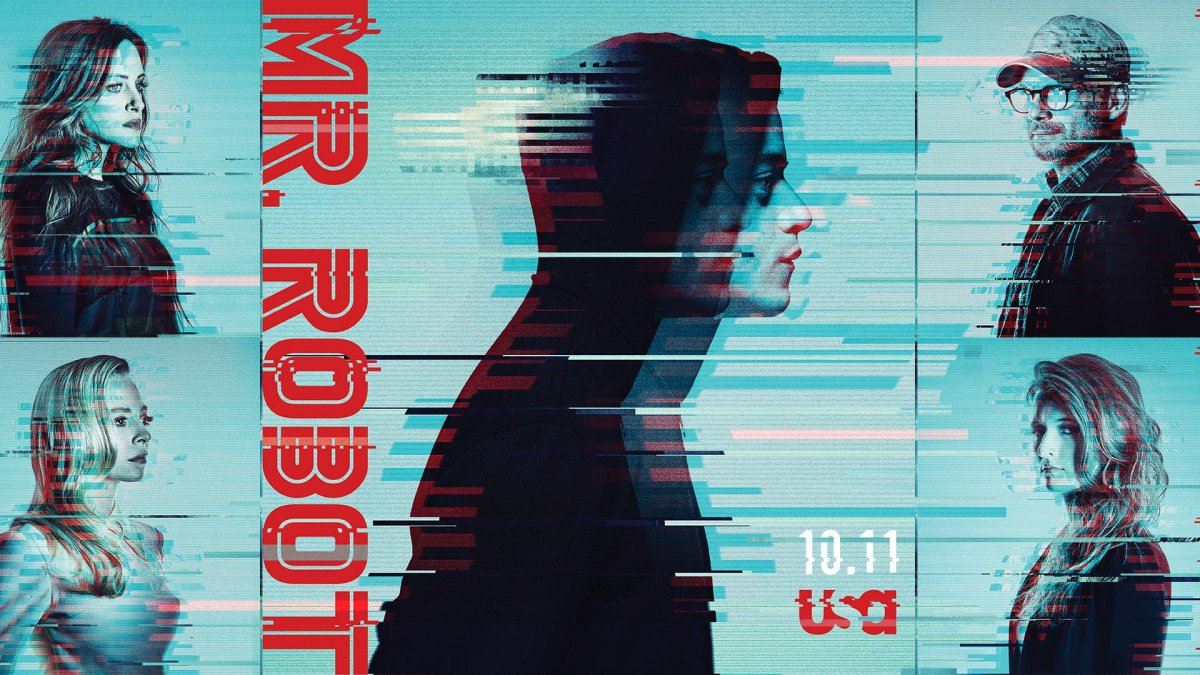 Speaking of Darlene, she’s in quite the pickle, isn’t she? She hasn’t been arrested, yet, but she certainly in some severe police custody as Detective Dom (one of my favorite characters of last season) revealed that she’s had F Society pegged since the investigation started. The police were just waiting until all the pieces were in place before they made their move. Dom’s big reveal was one of my favorite scenes from season two and definitely carried the weight of a holy crap moment. Where does she go from here though? Darlene clearly has her back against the wall and I find it hard to believe that she’ll flip on her brother buuuuuut what other choice does she have? And if she gets broken out of police custody (as the trailer implies) will her Dark Army paranoia drive her insane? Don’t forget that the Dark Army has been slowly picking off the loose ends of 5/9. I am very interested in Darlene’s story this season.

Mr. Robot season three leaves the world on the cusp of revolution. If Phase Two went into motion it’s quite possible that F Society could become legit revolutionaries opposed to a mask for hipsters. There is a good chance that we can watch as the world gets ripped in half this season between the rich/E Corp and the disenfranchised/F Society. I love that a show that started off about a mega hack could possibly be heading into some fairly large ideas and storytelling.

Putting all that aside though there still is the matter of Elliot’s mind and whether or not we can trust him as an audience. We have been reluctantly pulled into this universe through the eyes of an unstable genius. How much of what we’re seeing is real? We know from last years prison story that Elliot doesn’t always tell us the truth. Mr. Robot asks a great deal from its audience and one of those questions should be, is our narrator telling us the truth? I love that that can throw the entire narrative into question. Granted, I don’t think this is all a figment of Elliot’s mind but there are aspects of this story that I think are fabricated. Does Elliot even know what’s real at this point? I would argue no. So does that leave it up to us to figure it out or guide him?

Mr. Robot premiers Wednesday, October 11 at 10 pm on USA. I’m going to give the floor up to you Geeklings. What are you expecting out of season three? Will Elliot regain control or fall deeper into the abyss? What does Angela’s new role mean and can she be successful? What’s going to happen to Darlene? Is the world on the cusp of a revolution? Sound off in the comments below. If you’d like to discuss more Mr. Robot then you can find me on Twitter @iamgeek32. I’m all types of pumped to dive deep into the crazy that is Mr. Robot with you guys again. I wonder if we’ll see Alf again… I’ll see you all here Thursday with an episode review. In the meantime, question everything.