After last weeks time travel/parallel universe implying season opener it seems that we are in for quite the season of Mr. Robot. But behind all those science fiction implications there are some very serious story threads that need to be addressed, and I expect episode two to start to take that deep dive into this year’s big story arc.

For starters, there’s Elliot’s false sense of safety that looks to be super interesting as it plays out throughout the course of the season. Elliot currently believes that the bullet that almost killed him at the end of season two somehow wiped out the existence of Mr. Robot thus allowing Elliot to have a somewhat peaceful existence. If only, right? It turns out Mr. Robot is not dead at all, far from it, but working in the shadows when Elliot goes to “sleep”. I use quotes there because I seriously wonder if Elliot actually ever sleeps. If he’s just flipping from persona to persona then what is physically happening to his body? I doubt this will be an issue but I’m just naturally curious here. Yet, I do love the twist on the Elliot and Mr. Robot relationship so far this season. Keeping the two of them separate is something we haven’t really seen much on the show and could allow the Mr. Robot persona to develop into something more than a cyber-terrorist that happens to resemble Elliot’s father.

Mr. Robot isn’t working alone though. Nope, he has found a partnership with Angela, who seems to be the only person to tell Elliot/Mr. Robot apart because eye contact is key. Elliot spent a large portion of the premier closing the back door so F Society would be unable to carry out Stage Two of their hack. Unfortunately, Mr. Robot has talked both Irving (played by Bobby Cannavale) and Tyrell “Yes He’s Real” Wellick into believing that Stage Two is very much on. Which means the only person that Elliot trusts, Angela, is working behind the scenes against him. I’m sure when he finds out about that it won’t make his mind explode. Angela’s season three storyline, in one episode, is leagues better than what she was doing in season two and somewhat more believable. Having become a disciple of Whiterose and believing that the past could be changed it’ll be interesting to see what Angela does to achieve her goals. Clearly, she isn’t assisting Mr. Robot because she likes him. No, Angela has her own agenda and I think she’s willing to use whoever she needs to obtain it. Even if that person is Elliot. 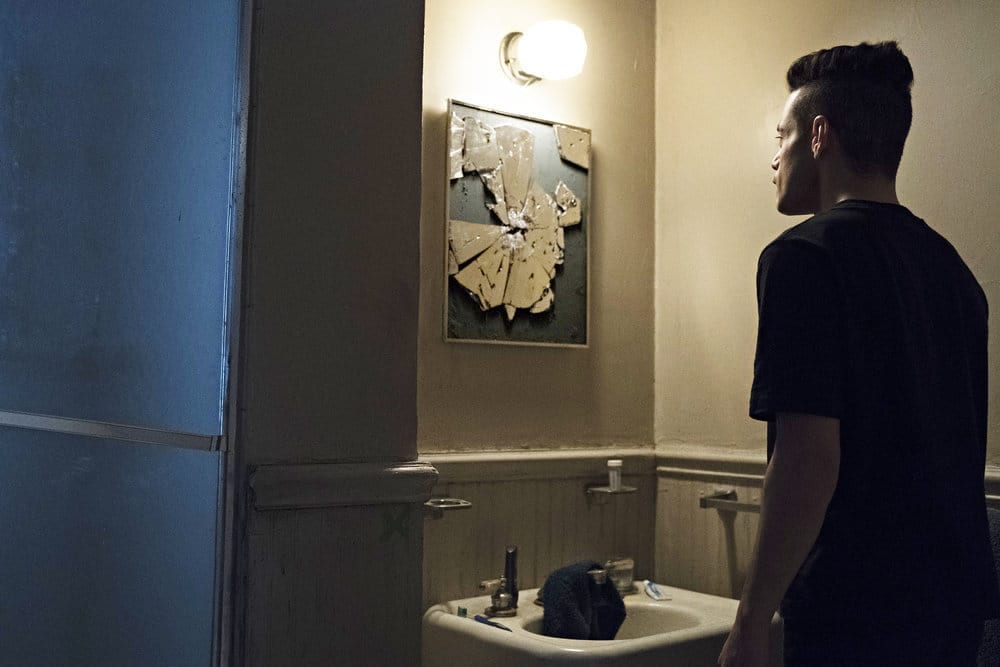 Outside of Stage Two, we should be focusing a bit on Darlene right now. For starters, how the hell did she get out of the police station?! Dom had her pretty much dead to rights with the mapped out board of everyone who was involved in the 5/9 hack which makes me a little skeptical that she would just let Darlene walk. Unless Darlene made a deal to turn everyone else in for immunity. Outside of the hack, Darlene also has a murder to worry about and knowing that the police have her done like dinner might be a big enough chip to make her cooperate. I really don’t want to believe that that’s what’s happening here but it is a very real option. If Darlene didn’t walk out of police custody without a deal then we have to wonder just how did she get out of there.

Despite the ambiguity of her escape, Darlene is going through some serious Dark Army is going to kill me paranoia. This is something that started late last season and is currently blossoming into something that could force Darlene into making a massive mistake or drive her crazy. I would be interested to see how the state of Darlene’s mental health juxtaposes Elliot’s this season. Perhaps protection could be a part of a deal with the cops though. I don’t know, but Darlene isn’t currently happy with Elliot, who doesn’t seem overly sympathetic, and kind of on her own right now. What happens if she finds out Mr. Robot is working to start Stage Two again? Can Darlene mentally withstand that?

I also expect to learn a bit more about the existence of Tyrell Wellick and his wife. If you recall from last season, homegirl is crazy and may have worked something out to get her husband off the hook for murder. I literally have no idea how to peg this woman’s storyline as it seems she’s just playing everyone so here’s hoping that that becomes a little more clear.

There you have it Geeklings, season three of Mr. Robot is getting ready to kick it into high gear. What do you think is going to happen next? How long can Mr. Robot and Elliot stay apart? Will Stage Two move swifter now that Elliot thinks it’s over? What is happening with Darlene? Sound off in the comments below. If you’d like to talk Mr. Robot, of course, you would, you can find me on Twitter @iamgeek32. I’ll see everyone back here Thursday with my episode review.