Last week’s Mr. Robot took us back alllllll the way to season one showing us, finally, just what happened the night of the 5/9 hack and the popcorn gun. We got just about all our answers on Tyrell Wellick as the show finally bridged the gaps between seasons one and two bringing us fully up to speed for season three. That doesn’t mean that there aren’t any lingering threads, this is Mr. Robot after all and having all the answers isn’t fun, but we definitely have some closure and it feels that season three is now free to start taking the story even further.

With this new freedom, we return to our current timeline where things are getting all types of crazy town banana pants. When we last left Elliot he had made two brutal discoveries.  The first being that his Mr. Robot personality, one he thought died with the gunshot to the stomach, was, in fact, alive and operating behind his back. Those moments where Elliot thought he was sleeping were when Mr. Robot was taking action. The second discovery came in the wake of that as Mr. Robot discovered Darlene planting something on Elliot’s hard drive for the FBI. Ugh! Darlene has been an anchor to Elliot in a lot of ways and losing her to the FBI has to be a considered a crippling blow to a man who is hanging on by a thread. When the episode ended, we caught a glimpse of Detective Dom and another FBI agent looking in on Darlene’s safe house as Elliot, possibly Mr. Robot (?), broke in. The jig is kind of up for the FBI or at least the secrecy.

The big reveal of season two was that the FBI had been watching all members of F Society since the 5/9 hack, thank Tyrell’s sloppiness, and that included Elliot. The fact that the police seem to be way ahead and just buying their time before striking is a bit surprising considering just how knowledgeable the Dark Army/Whiterose are about everything. Hell, they have an inside man and keep in consideration that this is a person who is seemingly orchestrating Trump’s presidency. I don’t know if I buy that Whiterose is clueless on this turn of events, they might even know that Darlene has turned rogue, but I can buy Elliot’s cluelessness. My man has a full plate. I wonder if his knowledge of Darlene’s activity will change his relationship with Mr. Robot. I have really enjoyed how this season has separated the two showing us how deeply different these personalities are, but does Elliot need Mr. Robot in order to fix this problem or vice versa? And by fixing does that mean killing Darlene? Cause that wouldn’t be cool with me at all. 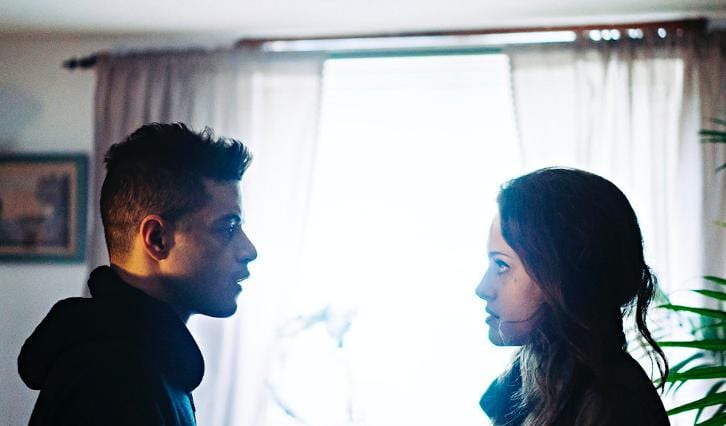 Elsewhere, I’m really hoping that the show picks up a little bit more on Dom’s storyline. She was one of my favorite aspects of season two, Grace Gummer plays her fantastically, but she’s kind of been on the sideline, for the most part, this year. I think with Elliot’s discovery her storyline will start to pick up which could spell trouble for Whiterose. Don’t forget about their super interesting conversation last year that maybe had allusions to time travel and resulted in Dom’s suspicion of Rose. If there’s a character who could blow this whole thing open it would be her.

One final note before I leave you, do you think Tyrell will find out about the death of his wife tonight? If he was mentally unhinged before what will he become now that he has nothing to really strive for after Stage Two?

There you have it Geeklings, what are you looking forward to tonight on Mr. Robot? What will the FBI do now that Elliot/Mr. Robot knows about Darlene? Can Dom crack this whole thing open before things get out of hand? Is Darlene’s life in danger? Sound off in the comments below. If you’d like to talk more Mr. Robot with me you can find me on Twitter @iamgeek32. Happy watching everyone and I’ll see you all tomorrow with my review!