Geeklings, I watch quite a bit of television and I say this with little remorse. I’m not one of those people who just sits around watching television for the sake of watching television. I find the shows that speak to me and I invest myself into them (that sounds a bit obvious, doesn’t it?). What I’m trying to get at is with the amount of television I watch I’ve grown to understand what makes certain shows entertaining and what makes other shows great. I think we’re all looking for that in some degree. That one show that changes the way you view other shows. I’ve gone through that a number of times with shows like Breaking Bad, LOST, The Shield, and more recently Stranger Things. What these shows have in common is that they’re asking for something from their audience. They’re asking for you to sometimes think outside of the box or to feel. Great television makes you feel stuff (a thought that I’ve clearly articulated so well here). It asks more of you, and while we can pick apart the pacing of this season of Mr. Robot there’s no denying the fact that Mr. Robot is asking more from it’s audience than maybe anything else currently on our screens.

_m4ster-s1ave.aes was a brilliant, brilliant hour of television that just flew bye. This episode could have ended after the first twenty minutes and I would still, most likely, hold it in the top ten episodes of anything I’ve watched this year. But it didn’t and I was thankful for that. Come on, when it comes to watching dramas we want that full hour. 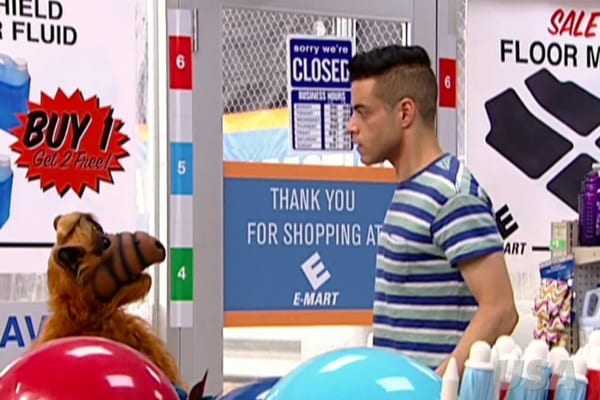 Opening the show in a Full House type spin-off was highly unexpected, super unorthodox considering the universe this show has created, and profoundly rich and disturbing. The layers hidden behind the laugh tracks and the cheesy one liners were deep and possibly foreshadowed things to come or hinted at things we’ve seen. It was especially weird seeing Elliot so brightly dressed while trying to maintain his personality in a world that was trying to so desperately to drown out reality even though it kept reminding him of the situations surrounding his life.  Making light of kidnapping, murder, and domestic violence made everything happening a bit uncomfortable but that clearly was what the show wanted. They wanted to present this situation where we the audience actually have to think. Watching Darlene get punched in the face by her mother is supposed to be funny in this little construct but made me cringe. Watching Alf (yes Alf!) run over a man in a car, again supposed to be comedic, did nothing but highlight Elliot’s guilt over the murder of Gideon (a true father figure). Everything about this was cringe worthy, slightly uncomfortable, and brilliant. I can’t express that enough.

When the episode reaches it’s ending (I’ll get to the middle in a minute) we learn that that Full House type spin-off was built by Mr. Robot to protect Elliot from the beating he was receiving at the hands of Ray’s men. Mr. Robot who is a projection of Elliot’s father, but now just wants to take full control of Elliot’s mind, acts like a father for the first time since the show started. Which begs a deeper question. If Mr. Robot is a projection of Elliot’s mind, which makes him in essence a part of Elliot, does that mean (a) that Elliot’s forcing Mr. Robot to act as he would hope his actual father would, and would that mean that Elliot is now in control, or (b) has Mr. Robot taken control of the emotional part of Elliot’s mind and is presenting him with the comfort/love that he needs to put trust in Mr. Robot making it easier for him to either reach a balance or take over fully? See what I mean? This show asks a lot from it’s viewers but that’s what makes it great. Either way, Elliot’s hugging of Mr. Robot at the end was highly emotional and impactful and one has to believe that the two of them will now be working together to get out of this obvious jam they’re in.

That wasn’t the only thing that happened this week though. Angela was put into motion as F Society’s hacker on the inside, a risky move, that would hopefully pay off in the end. This was another aspect of the show that I loved as it took this “inside job” and turned it into an Ocean’s 11 type heist with a Tarantino like soundtrack. Just more excellent work from the show creators in a show that already gave us Alf. Alf! 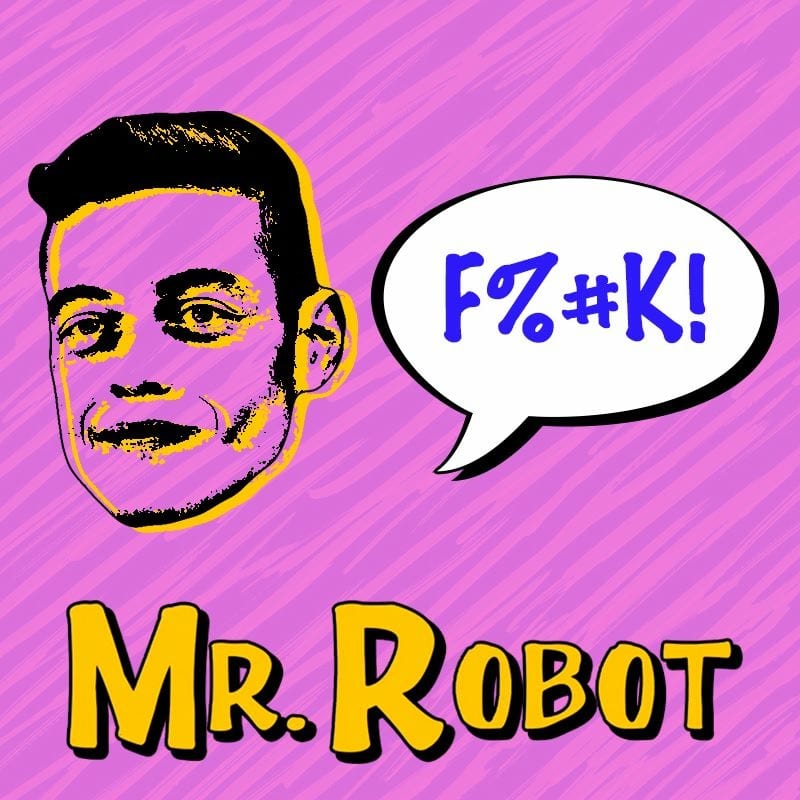 Angela did her best here, thought on her feet, and executed what needed to be done despite backing herself into some corners and scoring an unwanted lunch date (which could come in handy later on?). Except once her little black box of doom was plugged in, the wifi cut out (d’oh!) and she was asked to route in and fix it. As she’s doing this from her cubicle enter detective Dom (she lives!) clearly inquiring as to why Angela was on the top secret FBI floor. While Angela expressed the ability to think on her feet I feel she’s no match for Dom here. This entire case has been made personal now after the shooting and there’s little doubt that Dom knows about Angela’s ex so this should lead to tons of problems. Not to mention, I can’t help but feel that Dom is way smarter than Angela and can trip her up without even breaking a sweat.

And there you have it Geeklings. I think I’m done fawning over this weeks episode. What did you guys think? Was the Full House opening a bit much for you or did you guys enjoy it as much as I did? Does Angela stand a chance with Dom? The comments are yours. Feel free to sound off and see you back next week.