There are all types of television shows. There are sitcoms that people put on to kind of escape the grind and get a couple of cheap laughs. There are comedies, that are thankfully sans laugh tracks, that are not only funny but introspective. There are dramas and science fiction. There are crime stories and even a place for C list celebrities to box each other. Television is a fountain of entertainment and this includes Netflix and HBO streaming shows. Yet, with all these options and all these different genres and sub-genres the list of great television is kind of small. Great television takes the show format and gives you something more. Great television is literary and layered and is more then just plot and good acting. It is the perfect storm of all these things colliding together to not only give you a narrative that is captivating but also engaging. Something that when it ends you need to talk to someone immediately so you’re head won’t explode. Great television is Breaking Bad. It’s LOST. It’s The Shield. It’s…Mr. Robot.

Let’s face it. When Breaking Bad bid us farewell it left an RV sized hole in our television screens. I’m not saying there hasn’t been great television since Breaking Bad left (Game of Thrones would have a lot to say about that) but there hasn’t been a show that reached the same magnitude. A show that was so layered with all the essentials that when added up makes great television. I can honestly say that I believe that Mr. Robot has the potential to fill this gap. That maybe the next show to captivate our minds is sitting on the USA network waiting to be watched. And while ratings are a driving force for most shows, I mean, it’s what keeps them on and off the air, it seems that Mr. Robot could care less about ratings or adapting itself to the norms of regular television. Mr. Robot is here to tell it’s story and it will let nothing change that no matter how unconventional you may find it. 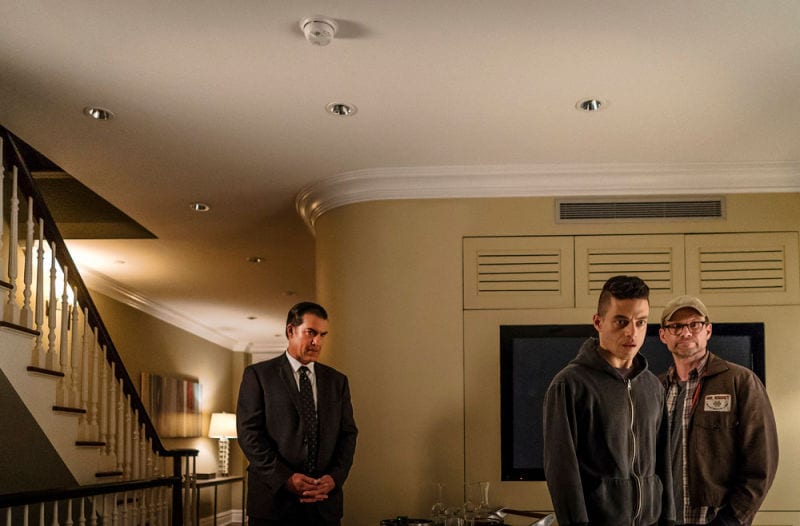 When season two started I was reading a lot about the show and it seemed that a number of sites were saying the same things. That the show had lost it’s shine, sophomore slump, slow with no clear direction, and even a couple of it jumped the shark. I didn’t agree with these sentiments (or USA for that matter as it was renewed for a third season) and Mr. Robot  couldn’t have cared less. And while the start of the season was a bit slow and avoided some of the bigger narrative it was never not interesting, and there was something else. It all seemed deliberate. That the narrative was being constructed this way for a reason. A gamble when you consider that you don’t want to chase viewers away from your show but a huge payoff for those of us who have stuck around. Mr. Robot has done something utterly unique with this second season, it’s lulled us into a world that seemed to be spinning it’s wheels as it waited for us to get our feet underneath us, and then it tore the rug out from under us. Hard.

If you need any proof of the deliberately slow pacing of the start of the season just look at these last five episodes. They have cranked it up to eleven and each episode delves deeper into intrigue, vaguely answering questions while raising millions more, all the while keeping us on the edge of our seats waiting for the other shoe to drop. If there even is another shoe. Mr. Robot rope-a-doped us pretending as if it couldn’t find it’s direction but knowing all along where it was going. I wonder if these critics who were slamming the show at the start feel the same way now because this second half of the season would not be as impactful without the first half. They are two sides of the same coin.

When I originally thought about writing the review for last nights episode I was overwhelmed. There was just too much to talk about. Where should I focus my energy? Everything from the opening to the ending and everything in between not only seemed important but necessarily. I could easily spend five hundred words (at least) talking about Philip’s talk of power and how he just doesn’t want it, but wants to be God. Think about it. The head of a corporation wants to be remembered as God. That’s so insane and egotistical and fitting that I can’t wrap my mind around it without wanting to talk to you for hours. Or watching Joanna Wellick get dressed. Here is this woman, this beautiful woman, getting dressed in these exquisite clothes  and jewelry in a gorgeous walk in closet while screaming metal punk music plays as the back drop. It’s the perfect dichotomy for Joanna who on the outside is a beautiful, well put woman but on the inside is a bag of cats (or screaming metal punk music). It’s brilliant and subtle and sticks out, and I could spend another five hundred words talking about that. What about Elliot smashing the fourth wall and actually asking us to help him search a room? I’ve never experienced a show that so deliberately asked for the audience’s participation, and it begs the question, where do we fall in this narrative? How guilty are we? Are we good people? See what I mean?! I could go on like this for hours.

But our real focus point should be on those last twenty minutes when the show flipped everything upside down once again. Yes, the hunt for Tyrell and possible location is important but it’s secondary to everything that happened after his location was discovered. Pairing Dom’s search for Darlene and Cisco with Elliot and Angela’s conversation on the subway created a sense of dread and impending doom that I haven’t seen since Breaking Bad. It’s not quite on the level of Ozymandias, I felt like I was going to throw up during that first viewing, but the show flex’s it’s muscle here. 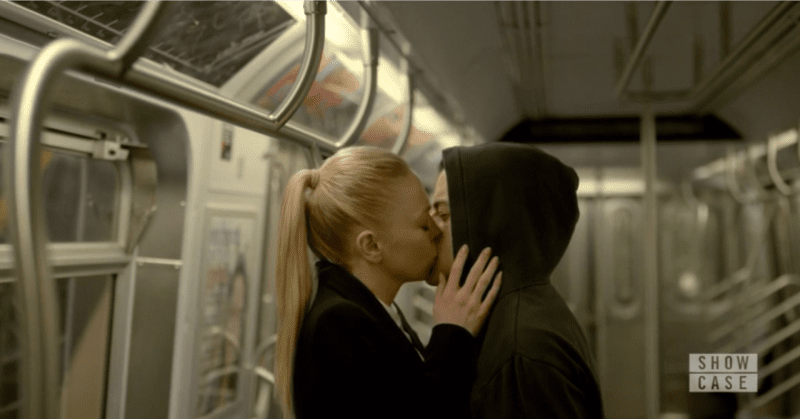 What makes this work so brilliantly is how little dialogue is used to punctuate the doom and importance of what’s happening. The show relies on it’s actors ability to tell a story through emotion and facial expression (much like the movie Drive) and they knock it out of the park. The conversation between Angela and Elliot plays like a goodbye while also serving a moment some fans may have been waiting for since season one. It’s natural for an audience to want to ship characters and the show gave us the foundation for an Angela/Elliot relationship but the narrative became too important for that. There was a bigger purpose. Watching their kiss last night was bittersweet and tragic instead of hopeful for Elliot’s mental well being and Angela’s self confidence. Right as these two people need each other the most they’re being torn apart. Not once during their conversation did I trust Angela which is problematic. She’s clearly backed into a corner and while she claims that she won’t turn Elliot and F Society in her history of trying to record her ex-boyfriend negates that. Maybe she learned her lesson and hid the recording device better but I think Angela is out to save her own skin. The frantic nature of Dom’s search bleeds into their conversation and underlines just how bad of a position they truly are.

Speaking of that search, wow. The intensity is not just amplified by the show’s score but it becomes deafening. Dom continues to be the smartest person in the room and her solving the riddle of Darlene and Cisco’s whereabouts is something to behold. Its imperativeness is highlighted by the brown outs just reminding us of the fact that Dom is out there on her own in the dark here. This whole investigation she’s been on her own, an island to herself, so it makes sense that she would be the one to run five blocks, talking to strangers, in the hope that she’ll get there first. This is her case and she deserves to be the one to discover them. And then the diner appears and the music drops out. 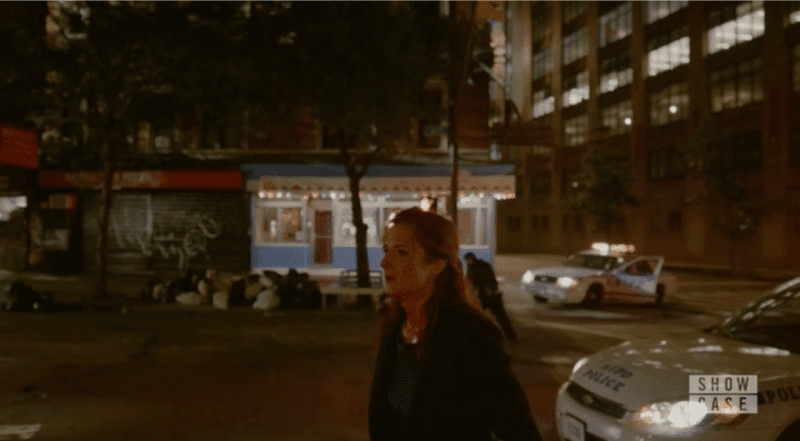 One of the best things about this episode was it’s use of cinematography and watching as Dom enter the diner, to confront Darlene and Cisco, from afar just heighten the tension. Leaving that scene open wasn’t done as a tease it was done in the art of good story telling. It had me going- What’s going on in there? Are they still in there? What’s this motorcycle? Oh crap! It’s the Dark Army! Get them down Dom, get them down! Oh, crap whose hit, whose hit?! Dom’s alive! She got him! Here comes the cops but shit he just capped himself. What do you mean it’s over?!?!?! No!! And that’s the point. That’s exactly what Mr. Robot wanted. They wanted us to feel this part of the story. Not everything needs to be explained to us sometimes we can interrupt things as they’re happening. I’m sure next week we’ll see what happened but it won’t be to fill in the gaps it’ll be to teach us a lesson in perspective. Mr. Robot asks a lot from it’s viewers and if you’re willing to answer their call then you get to reap the rewards of fantastic television.

I don’t know how this column holds up as a review but how does Mr. Robot hold up as a typical show? Where did this episode leave us? Angela is about turn herself in and maybe ratting out F Society, Elliot is in a state of guilt that we haven’t seen before and it’s centered around what’s happening to Angela (who might be giving him up), Darlene and Cisco could be dead, right as Dom gets ahead the Dark Army reshuffles the deck and re-establishes dominance, and Mr. Robot himself is no where to be found. What does that mean for these final two episodes? I don’t have a clue Geeklings. I have theories and ideas, but I can’t map out this show because it’s on a whole different level. That’s what makes it great television. That’s what leaves it on the cusp of possibly filling that Breaking Bad void. That is why you need to be watching because great television doesn’t come along every day and shows like Mr. Robot should be celebrated. You’ll thank me for it.