After sitting most of this season out, it appears that Elliot is finally getting himself back in the game and not a moment too soon. F Society, for lack of a better term, is kind of effed right now (yay a play on words!). For starters Romero is dead, Darlene is becoming super paranoid and unnerved, the FBI is all up in the Hack Shack (arcade), and Elliot has no idea that any of this is going on. When he set up F Society and proposed this hack, he told his merry band of hackers that the hardest part would be after the act was committed. What he didn’t tell them was that he was going to have a nervous break down because his mind keeps projecting a split personality in the form of his dead father, and that he was going to pass out and wake up three days later with no memories of anything that happened in between. Oh, and he also failed to mention that he was just going to drop off the grid! Good luck goons, you’re on your own. To say that Elliot has been a good leader would kind of be like saying it’s easy to hack into the FBI data base. Well, I assume that it’s not easy despite how much Elliot is making it look otherwise. Damn hackers.

If the trailer is any indication then it looks like a number of stories are going to start converging together, and I think this is something that this season could surely use. Don’t get me wrong, I don’t think this season has been bad, in fact I think it has been a great character study of how one man deals with a mental breakdown, which has lead to some brilliant acting. Now it’s time to get this story moving. Both Elliot and Mr. Robot know they can’t exist with out the other. In times of war the enemy of my enemy is my friend, and I suspect that Elliot and Mr. Robot are going to need each other to get out of this pickle.

Angela last week played her hand and got turned away by Evil Corp. Turned away but not fired. I feel that that’s important here. It seems that Darlene has been paying attention to Angela and her exploits over at Evil Corp and now she’s bringing Elliot in on the news. I wonder how this will effect his relationship with Angela. Having grown up so close, but clearly very distant now, will the fact she works for Evil Corp be a bridge burner or will Elliot try and convince her to be a spy. For the record I think this is a terrible idea because, and try as she might, there’s no way Angela can hold under pressure. Something tells me that Elliot is going to make his confession to her, cause he’s just itching to talk about it, and she’s going to turn around to Mr. Evil Corp and let them know. D move Angela. D move… well, if that’s what you end up doing. 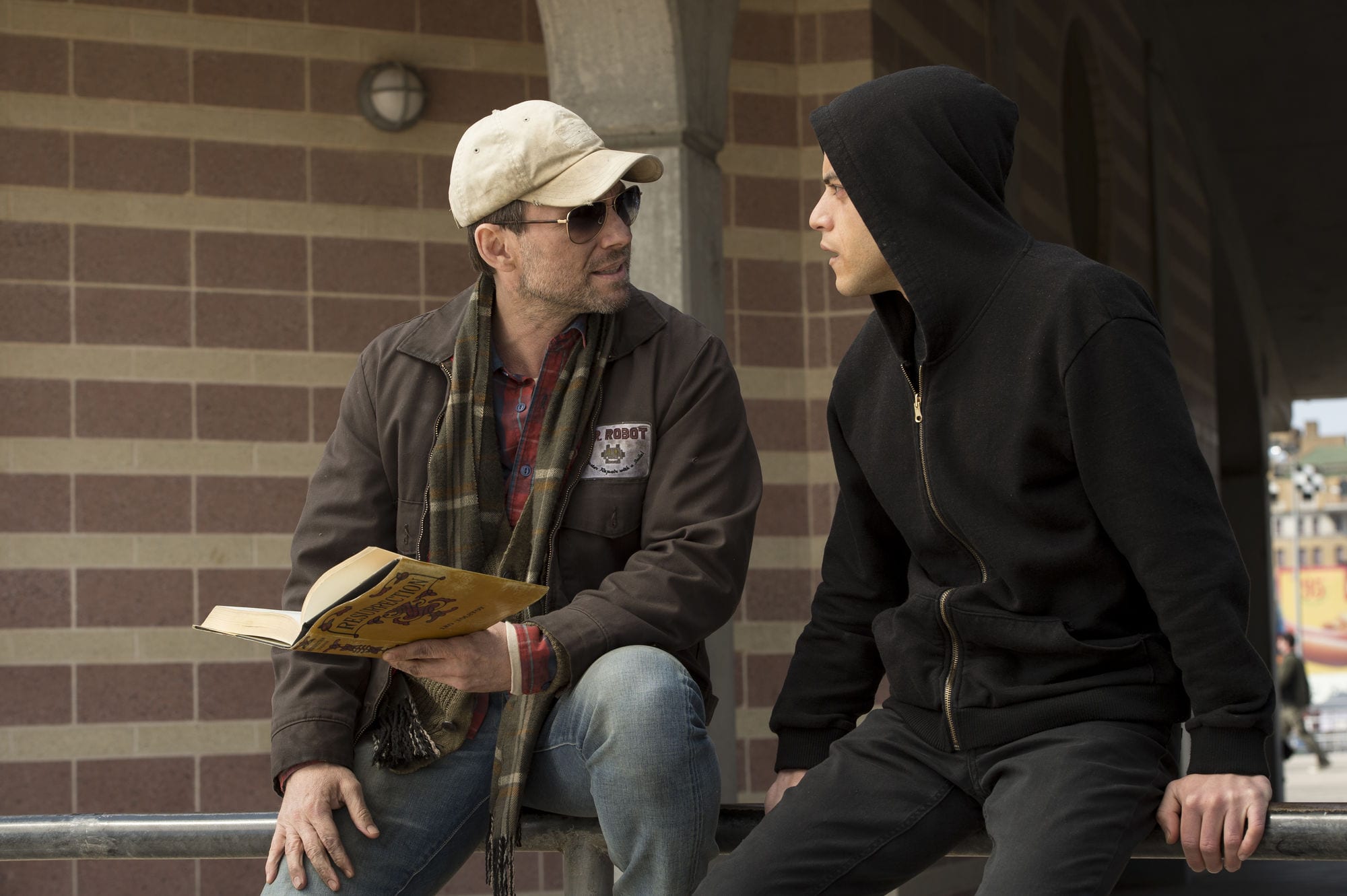 White Rose showed herself last week, and she has put a plan in motion. I’m sure it involves the Dark Army as those creepy ass masks make an appearance in the trailer while staring down Detective DiPerro. I’m still standing by my working theory that she could become some sort of saving grace for Elliot and F Society. Not sure why but I just having a feeling. Or I could be totally wrong which, if you read some of my other show reviews, is something that happens from time to time.

There you have it Geeklings. Mr. Robot looks to finally move the plot ahead this week as a number of story lines look to be coming together. What do you expect to see happen? Can Elliot get the band back together in time to cripple Evil Corp before they start to rebuild? What does the Dark Army have in store for F Society? Can Angela be trusted? Guess we’ll just have to watch tomorrow night to find out. Until then the comments belong to you. Happy viewing!