Over the last couple of weeks Mr. Robot has lifted back the curtain giving us a bit more insight in the direction this second season is heading as all the roads seem to finally be converging. You get the feeling that we’re building to something huge here and just like Elliot we’re right on the outside of it trying to figure it out.

The episode started with a fill in the blank flashback to Elliot’s arrest and his time in jail (Ray was the warden… eeeep). It turns out that Elliot didn’t have to create a profile for the police or admit to the prison break out because his psychiatrists ex was pretty pissed about the dognapping. I loved Elliot being processed as he lied about drug addition and medications and even said he was doing great. The look the cop gave him was fantastic. I also really enjoyed Elliot ignoring his lawyer’s advice, and pleading guilty, while Mr. Robot lost his face in the court room. This was the first time that we’ve seen Elliot completely calm and in the driver seat, and it was a welcomed site. At the moment of his arrest Elliot is the most sound minded we have seen him, and I couldn’t help but feel that I want this sort of life for him. Not a prison life per se but a life where he feels comfortable in his own skin. Like actually comfortable not the facade that Mr. Robot throws over his eyes. In this moment Elliot is Elliot and he is sure. 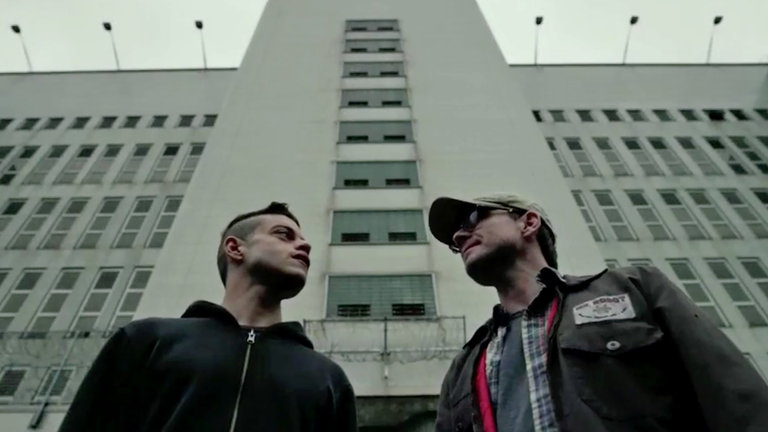 I wish that I could say this was something that continued throughout the episode buuuuuuuut it didn’t. Elliot gets freed from prison, picked up by Darlene (hey, what did she whisper?), and finds himself in her apartment going to the bathroom. In this moment Elliot is composed and collected and seems like he knows what direction he wants to take things. Then he hears Mr. Robot’s voice… from the other room talking to Darlene and Cisco and things start to fall apart kind of rapidly.

There’s instant confusion to how Mr. Robot can be in one room while Elliot is in another, and Mr. Robot quickly swoops in telling Elliot something doesn’t feel right. I believe he uses the term overheating or glitching. This is done to immediately sooth Elliot’s paranoia helping him feel like he’s not alone. I’ve been saying it for awhile now but it is clear that Mr. Robot wants full control and I think he’s found a way to seize it. Protecting Elliot from his prison beatings and would be raping earned his trust and put him as an actual father figure, and I’m starting to believe that this brought down a wall of defense. Think of Elliot’s brain of having some sort of firewall to use computer terminology. There was always something about Elliot that knew Mr. Robot wasn’t real and wasn’t his father, but when he hugs him and looks to him for protection that wall falls. Now the door is open for Mr. Robot to take control praying on the vulnerability of Elliot.

I don’t know how many of you read Stephen King’s Dreamcatcher (there was also a movie but it’s best if we don’t talk about it) but I think it’s kind of relevant to what’s happening here with Elliot and Mr. Robot’s glitches or over heating. In Dreamcatcher  an alien takes over the mind of the main character and locks him in a room in the back of his mind (bare with me as it’s been awhile since I’ve read this). I do recall the mind looking like a storage room and the alien was looking for a certain file. That’s not what’s important. What is important was the alien seized full control of this character while said character watched helplessly from a room inside his mind. I think that’s what’s happening here. I think Mr. Robot has finally found a way to lock Elliot up when it’s most convenient. How else could you explain the glitches? To lock Elliot up all at once would be too damaging and would cause him to go insane, but if you slowly implement through a series of glitches or overheating then you keep Elliot believing that there is some break down in his mental system. That maybe he’s responsible for what’s happening and he hopefully willingly locks himself in a room in his mind finding himself too unstable. It’s the ultimate con from a split personality and reeks of Fight Club imagery. Which isn’t a bad thing because we all know Fight Club was awesome.

Mr. Robot knows the game at hand and he’s been keeping it from Elliot since day one. When he presented the idea of 5/9 it was to restore balance to (the Force?) the world financially. Elliot could get on board with that and did driven by his hatred of Evil Corp. But there is clearly something larger at play here. This isn’t just about money, although it is the driving factor. When Whiterose and the head of Evil Corp were talking they brushed upon the idea of World War III, and I’m starting to wonder if that’s what Mr. Robot wants. A world thrust into chaos or in the dark, which gives the lights flickering imagery an even more eerie feel. I’m starting to think of Mr. Robot as Heath Ledger’s Joker, “it’s not about money. It’s about sending a message. Everything burns.” Ultimately I think that’s what Mr. Robot wants. He wants to watch the world burn. It’s the punk anarchist version of Elliot’s mind, and we can’t act surprised that it exists because we could see it bubbling underneath the surface this entire time. Elliot wants to rage against the machine but the rational part of his mind won’t let him, and that’s why his mind creates this projection. While the rational part is to afraid to rage the angry part can no longer sit idly by and not challenge. We seemingly now have reached a point where Mr. Robot has now played Elliot well enough that when he takes charge Elliot will be powerless to stop it. 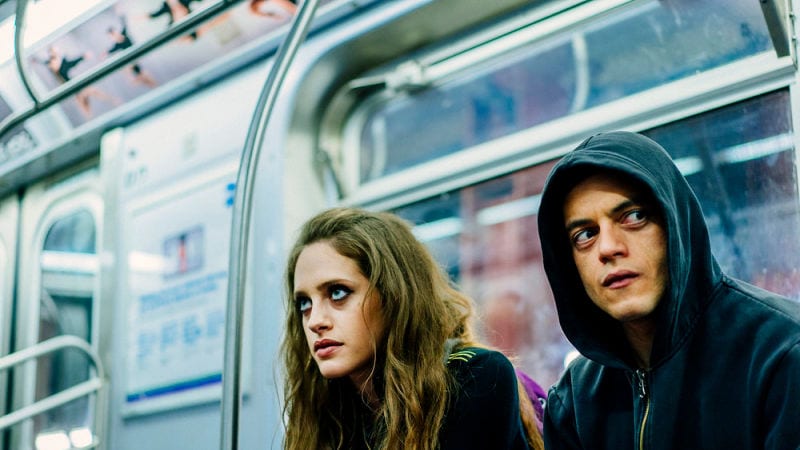 Much like Elliot, I don’t know what Stage Two is but I know Mr. Robot does. I know he’s keeping it from Elliot. As a a matter of fact it seems that he’s keeping it from everyone. The Dark Army doesn’t even seem to have a clear picture of what Stage Two is. That’s kind of scary. I also know that Joanna Wellick knows more then she’s been letting on, and I’m curious to see how big of a role in Stage Two she has. I’m going back to my Full House theory where Tyrell was found in the trunk. I think Mr. Robot has him stashed somewhere and I think Joanna knows for the most part where he is and why she can’t see him. This entire season he’s been working on the launch of Stage Two and once Mr. Robot is able to fully take control it’ll be on like Donkey Kong.

This season has really tackled the theme of Elliot being a prisoner whether it’s in his own mind or an actual prisoner in jail. I believe that is something that is going to continue as season two steam rolls towards it’s conclusion. There’s no way this season ends without Mr. Robot taking full control, and when that happens what can we expect? I don’t know but if the Dark Knight taught me anything it’s some people just want to watch the world burn.

Some other quick thoughts:

There you have it Geeklings. Mr. Robot is firing on all cylinders and now that we have some answers it’s time for some new questions. What do you think about my theory concerning Mr. Robot? Do you think Elliot will be able to maintain some sort of control or is he doomed? What is Stage Two? Sound off in the comments below.