There was a lot for fans to dissect in this past Sunday’s episode of Game of Thrones. A lot of it had to do with the lineage of Jon Snow and even a little bit of Tyrion, but while all of that was happening, another family matter was in the works as well.

Fresh off of his battle loss against Daenerys and Drogon, a defeated Jamie secretly met with Tyrion to discuss the White Walkers and the potential for a truce. When Jamie revealed this information to his sister she let him know that she already knew about his secret meeting with the brother that murdered their son. Of course, Jamie briefly fills her in that it was actually Olenna that murdered Joffrey, but Cersei is not having it. She feels betrayed and can see her brother and ally slipping away.

So, what’s a great way to assure his unwavering loyalty falls in her favor? Tell him that she’s pregnant, of course! How convenient. To further seal the deal Cersei tells Jamie that she will proclaim him to be the father, which has been a long time struggle for Jamie as he was never publicly able to be that for Joffrey, Tommen, and Myrcella. With Jamie finally back on her side, Cersei gives him one final threat, “Never betray me again.”

With that line, her motives almost became too apparent, but there are still some lingering questions. Is she actually pregnant and excited about having another child with Jamie? Or is she lying in order to gain Jamie’s allegiance?

The most obvious guess would be that Cersei is lying to Jamie in order to gain his allegiance. He had just told her that their army didn’t stand a chance against the Dothraki, disproved her long standing theory that Tyrion murdered Joffrey, and he secretly met with Tyrion about a potential truce. While Cersei may seem cool as a cucumber, you can guarantee she’s seeing red. She knows exactly what strings to pull to get Jamie to do what she wants.  She gives Jamie the hope that their house name would be able to continue after all and also tells him that she will tell everyone that he is the father.

Hopefully, Jamie is smart enough to know that she would never do that (does a woman who was shoved through the streets naked while “shame” was shouted all around her sound like someone who wouldn’t give thought to the sheep?), but he seems so desperate and happy to hear the promise that he may go against his gut.

On the other side though, Cersei very well could be pregnant. We did see the two have sex this, which may have resulted in a pregnancy. However, if you dive into both the book and the show’s mythology it seems likely that if she is telling the truth, she won’t be pregnant for long.

In one of the show’s very few flashbacks, we saw a young Cersei visit a witch by the name Maggy the Frog who tells her that she will marry the King and have three children who will all die. Therefore, this could mean that since she was promised three children, she would not carry a fourth to full term. Maggy also tells Cersei that she will be Queen until a younger more beautiful woman comes and takes all that is dear to her.

In the books, there is another very important part of the prophecy that the show left out. Maggy tells Cersei “And when your tears have drowned you, the valonqar shall wrap his hands about your pale white throat and choke the life from you.” Valonqar in High Valyrian actually translates to ‘younger brother’. In the books, it’s apparent that she believes this will be Tyrion,  but fans have not forgotten that Jamie is actually the younger twin of the pair.

A Reddit user found this interesting easter egg in the season 7 trailer further confirming this theory. 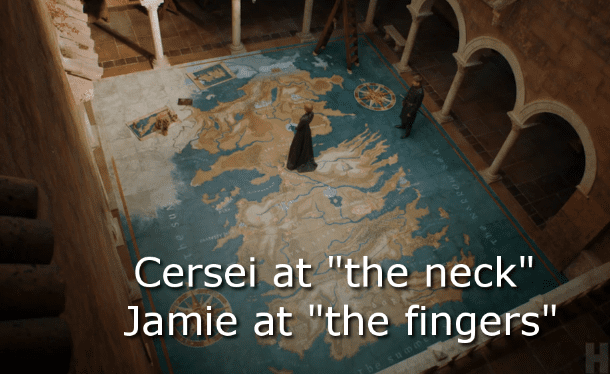 In a way, Cersei has spent much of her arc consistently misinterpreting the prophecy and in turn, has actually fulfilled it. When she should have been focusing on Dany’s venture to Westeros she instead thought the prophecy was speaking of Margery as the young and beautiful queen who would cast her aside.

In addition to that Cersei has had a hand in the death of all three of her children. Her constant pushing of Joffery to be a strong ruler led to him becoming a despicable human being, leading Olenna to poison him. Her belief that Tyrion was the one who poisoned him led to her punishing Tyrion with the trial by combat where the Moutain murdered Oberyn Martell. This action led to Ellaria Sand exacting her revenge by poisoning Cersei’s daughter, Myrcella. Lastly, her orchestrated genocide at the Sept by Wildfire kills Margery, leading Tommen to commit suicide.

However, Jamie has still yet to fully turn against Cersei even after all that she has done. Having children and being a mother is Cersei’s only redeeming and humanizing quality. The loss of another child could send her completely over the edge and cause her to do something that would turn Jamie against her once and for all. Either way, her miscarrying or her lying about the child, in general, would take away something Jamie dearly coveted as well. Who knows what that loss or betrayal could do to him.

What are your thoughts on the situation?