Over a year ago, news broke that Benedict Cumberbatch was confirmed to be the voice of The Grinch in Dr. Seuss’ How the Grinch Stole Christmas. The film is going to be an animated reboot of the classic, and we’re excited to see what they do with it.

While we wait for more details about the film, we did get a look at the Grinch who has his heart (which is 3 sizes too small) set on ruining Christmas. According to Movie Web, the title has also been shortened to just, The Grinch.

The first look at the Grinch comes from License Global Magazine and was first posted on Coming Soon. With a release date of November 9th, 2018 – we’ve got a while to wait, but it’s sure to be worth it. The tagline for the film is simple but effective. 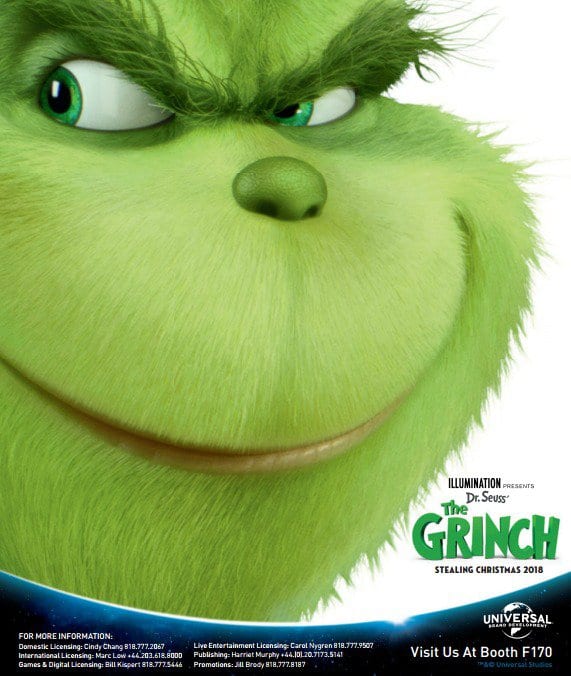 The Grinch is happening in a full on 3D CG mode, so it’s a new experience for fans of the classic film. We’re also excited to see what Benedict will do with the character. As Movie Web noted, the last actor who took on the Grinch came from a comedy background, and Benedict’s is very different.

In 2016, some footage of the film was shown at a con and the producer of the film made a statement about it.

‘What we’ve set out to do with this telling of the Grinch is make it both modern and traditional at the same time. When I say that I mean from a traditional standpoint, we’ve really tried to go back to what we perceive as the essence of what Ted Geisel was communicating. What I love about his work is that at the center of it, of all of his stories, are very, very simple and universal ideas. The last telling of the Grinch focused a little bit more on sort of the commercialization of Christmas and how the commercialization of Christmas can lead us down the wrong path. For me, in reading what Geisel wrote, I view it more from a character perspective. I think that the essence of this film is the notion of this cynicism comedically expressed in the Grinch and this absolute innocence represented in Cindy Lou, on a collision course with one another through the course of this movie. It’s the simple question of whether or not innocence can transform cynicism. The beauty of that simplicity for me is what’s at the heart of the movie. In the experience of the movie I love the sort of wicked comedic aspect of this character the Grinch and I think that what you’ll see is from the very, very early animation tests, very raw, you’ll see that there’s an undeniable appeal in the character in spite of that kind of, sort of wicked persona, and I find that very, very, appealing and attractive. Our choice in directors on one hand, Yarrow Cheney, who’s come up through our process of having been a production designer and now co-director and directed one of the sweetest shorts we ever made, called Puppy, combined with Pete Candeland who is really best known for his work co-directing all the animated Gorillaz videos. The modern and the traditional coming together. And I think our choice in voice will also immediately suggest the distinction of the film.‘

The classic story with a modern twist, we’re looking forward to how that plays out. Are you excited to see The Grinch? Let us know!