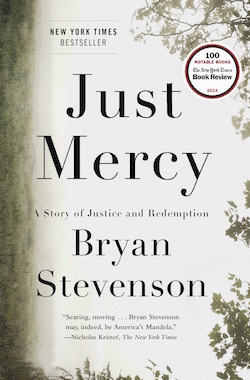 It looks like a Marvel hero and villain are teaming up for a new drama film from Warner Bros. titled Just Mercy. Brie Larson, Michael B. Jordan, and Jamie Foxx are all set to star in the film, which is adapted from the book Just Mercy: A Story of Justice and Redemption, and tells “the true story of Bryan Stevenson, a gifted young lawyer fighting for equal justice in a flawed legal system.”

Jordan will be playing the role of Bryan Stevenson, the defense attorney for Walter McMillian, a man convicted of capital murder. Foxx will be playing McMillian and Larson’s role is still unknown at this time. The film will be directed by Destin Cretton, who previously worked with Larson on Glass Castle, and co-written by Cretton and Andrew Lanham. Jordan will produce alongside Gil Netter and Asher Goldstein. Just Mercy originally set up shop at Broad Green Pictures but moved to Warner Bros. earlier last year.

Larson, who won the Academy Award in 2016 for her haunting performance in Room, has a lot in the pipeline when it comes to the big screen. She will be headlining Marvel’s first female-led superhero film, Captain Marvel next March and will reprise the role in Avengers 4 in May. She will also headline Victoria Woodhull, which follows 1872 activist Victoria Woodhall as she becomes the first female presidential candidate for the United States.

Jordan is fresh off his Marvel debut where he played complex villain Erik Killmonger in the record-breaking Black Panther. He recently starred in HBO’s Farenheit 451, which earned an Emmy nomination for Outstanding Made for Television Movie. He’s currently working on Netflix’s upcoming superhero drama series Raising Dion, which centers on a single mother named Nicole and the relationship she has with her young son Dion who begins to have magical and supernatural abilities following the death of his father Mark (Jordan). He also will be reprising his role as Adonis Johnson in the Creed sequel with Sylvester Stallone and will be directing the upcoming film The Stars Beneath our Feet.

Just Mercy is set to start next production month in Atlanta.

Home » Movies » Brie Larson and Michael B. Jordan Team Up for ‘Just Mercy’ at Warner Bros.