]Geeklings, it is soooooooo good to be back and reviewing The Walking Dead with you again. Can you believe that’s it’s been two months since we last saw Rick and Company? It certainly does feel longer than usual and maybe that has to deal with the heaviness of this season. Since the very get go, we have seen our main characters kicked and beaten like never before. The rule of Negan is very real and as season seven has progressed we’ve all been able to see just how powerful this barbed wire bat wielding lunatic is. During these off months I’ve been reading a lot of articles where show runners and actors have been defending the bleakness of this season, which is a shame, considering this is a show about a zombie apocalypse which almost guarantees that it’s not going to be all rainbows and kitten whiskers. In this reviewer’s most humble opinon, I believe season seven has been giving us the best of what this show has to offer. I’ve found in years past that The Walking Dead has had trouble being consistent, and outside of a couple of episodes this season (“Swear” and “Hearts Still Beating” where both meh), season seven has been firing on all cylinders, and that’s largely due to the presence of Negan. I would go so far as to argue that Negan is the best thing to happen to this show since Daryl went looking for wild flowers to give to Carol for hope.

But even with the dominance of Negan and the Saviors it does appear that the tide is starting to shift. After a number of glimpses throughout the season it took the mid-season finale for Rick to finally hit his Twisted Sister threshold (“we’re not gonna take it/no, we ain’t gonna take it/we’re not gonna take it, anymooooooreee”) and it appears that our survivors are going to be going into complete revolt mode. Since Rogue One taught us that rebellion’s are built on hope, we were given this epic bromance moment to make the future seem a tad bit brighter. 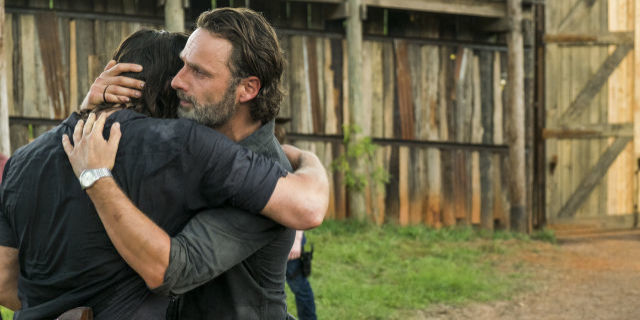 Although brighter may be pushing it a little bit. As of right now there is no revolution just yet, only whispers. The arrival of Rick and the rest of the gang at the Hilltop is the flame that we’re hoping sets this whole thing ablaze, but there are still a number of moving pieces before that can happen. For starters the other communities. We’ve seen over and over this season how Rick is incapable of doing this on his own. The group he has, while strong, just doesn’t have the man power it would take to bring down the Saviors. In order to beat Negan; Alexandria, the Hilltop, and the Kingdom (remember those guys?) are all going to have to ban together for war. The Saviors have proven that their numbers are a tad bit on the epic side, I would go so far as to say we still don’t know how many people make up that community, so Rick is going to need all of these groups to ban together to form an army that hopefully includes a tiger.

Rebellion isn’t the only thing we should be keeping an eye for this second half of the season. There are still a number of red flags blowing in the wind right now. For example, the weapons that Aaron and Rick got from the shack amidst the Sea of Undead. It appears that the person who owned that cache of weapons is still very much alive and now following our friends. Just a tad bit creepy. Any one have any thoughts of who that could be? Someone we’ve seen before or someone brand new? Also, how about all those weapons that are just waiting to be taken from those ocean dwelling ladies? Tara may have sworn never to go back but something tells me that that little group of amazons are going to be showing themselves again. Speaking of that episode, where the hell is Heath? He’s not dead, right? And just when you thought there were enough things to concern ourselves with, Eugene gets taken by Negan. That shouldn’t lead to awkwardly hysterical moments at all.

There you have it Geeklings, tonight the second half of season seven starts as we seem to be gearing up for a little bit of war (what is it good for?). Outside of the rebellion what do you guys find as the most interesting story line? Who do you think is spying on the group? Can Eugene survive at the Savior’s compound? Can Rick go all Braveheart and unite the clans? Sound off in the comments below. If you’d like to talk Walking Dead with me or have any questions feel free to find me on Twitter @iamgeek32.

It’s good to be back Geeklings. Happy viewing and see you back soon with the episode review. Many huzzahs!