One of my biggest problems with The Walking Dead since it returned from it’s winter break, is it’s inability to share the story telling. Each episode centers on one section of the cast and expands what’s going on there, which is all well in good, but the next week centers on a different group of characters and what was happening with them during that same time period. It’s frustrating in a way because we’ve seen shows like Game of Thrones juggle such a large cast and story threads effortlessly (hello two Emmy wins in a row) so we know it can be done. For whatever reason The Walking Dead refuses to go that route which has been nagging at me as of late. I’ve already resigned myself to the belief that this war or coup against Negan will not start to next season, and it now seems that the rest of season seven will be to prep season eight, and that’s lame. There should be progression and there should be resolution. At this point we’re just waiting for the shoe to drop with the Kingdom and Rick to discover that coastal weapons cache. Next season war this season stalling. Yay!

This episode looks to continue the trend of separate story telling as, love birds, Rick and Michonne go on what I can assume is a weapons love retreat hunt. You have to keep the Whisperers, ummmm, the garbage people, happy. If the trailer is any indication, then we’re seeing a more relaxed version of Rick which is interesting. Maybe it’s the fact that he has a gun in his holster again (not a metaphor) or knows that he has an army, but Rick’s demeanor has totally changed since his bro hug with Daryl. As we’ve learned in the past, Rick has this problem with suffering from hubris and I worry that his alliance with the garbage people has him a little over confident. Think about it, finding weapons isn’t the easiest thing in the world. It’s not like there’s a weapons depot just chillin’ around in the apocalypse. Hell, there isn’t a whole lot of food going around either. Remember in season two, three (?), when Carl almost ate cat food? But yeah, let’s find some weapons!

I appreciate Rick’s confidence and his need to take down Negan and the Saviors, but you would think after last time he’d keep himself level. Negan seems to thrive off of over confidence because he tends to be three steps ahead. Granted, Rick’s coup may take him by surprise, we can’t dismiss the fact that Negan has the numbers, weapons, a wall of walkers covered in metal (thanks Eugene!), and the attitude of someone who generally doesn’t give an eff. Hard to defeat someone like that. Especially when you’re only alliance relies on finding weapons for a group of people who take what they want from those who fight for it. 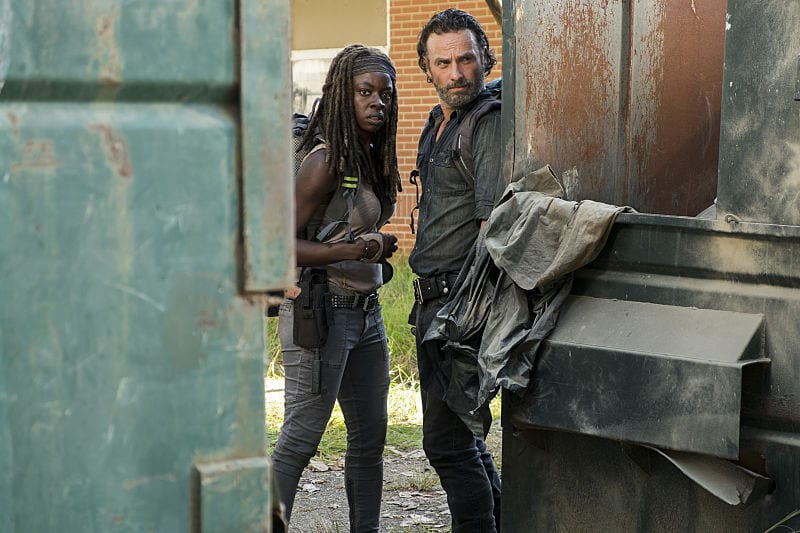 Elsewhere, Rosita continues her need to have a purpose within the show. I know that sounds harsh but I’m finding that her story line is being shoe horned in to make her relevant. We lost some key members of the cast this season and it’s time for characters to be called up from the bench, but Rosita is squandering that opportunity with the audience, I feel. I get that she wants to contribute that she wants to kill Negan for what he did, and that is completely commendable. I’m all for it, but her actions are isolating her from the group and maybe to a degree the viewer. We want to cheer for you. We want to see you get revenge but you don’t have to be such a douche to everyone. Seriously, who gets snippy with Tara? She’s like the human equivalent of a hug in this world. You be nice Rosita!

One more side note before I let you go, did any one else get a Zombieland vibe from the trailer? You know, because they’re at an amusement park? I swear to God if Rick finds a Twinkie in this episode I will openly apologize for some of the smack I talked in this column.

There you have it Geeklings. What are we thinking of this second half of the season? Do you think Rick is a little too relaxed? Should Rosita kind of turn it down a notch? Will the story progress at all this season or are we just setting up next year at this point? Sound off in the comments below. As always if you’d like to continue talking The Walking Dead with me (or anything else geeky for that matter), you can find me on Twitter @iamgeek32. If you’re looking for more of my word play then you can turn to my blog, I Am Geek, for that. In the mean time happy viewing and I’ll see you all tomorrow for the episode review.