It has not been an easy season if you’re a fan of Daryl Dixon. For starters it seems that he’s been on the show on a more limited basis this years, and while part of that has to do with the way the show chooses to do it’s story telling, a larger part of it has to due with the fact there hasn’t been much for Daryl to do. He literally only got a crossbow back a couple of weeks ago. Outside of that there was the early season Negan punch to the mush and we cheered, but two minutes later that punch got Glen killed and we boo’ed. Then there was the whole dog food sandwiches and the killing of Fat Joe (?) thing, and who can forget the bro hug of twenty seventeen…

Since then Daryl has kind of been just chillin at the Hilltop hoping not to be discovered which has lead to a pretty uneventful season for him thus far. I suspect that that’s about to change with the Saviors arriving at the Hilltop in search of everyone’s favorite apocalypse survivor with hair obscuring his vision. Seriously man, just push it to the side a little bit. Just a little. I don’t understand how he sees.

It makes sense that the Saviors would come to the Hilltop in the hopes of finding Daryl. Gregory is a weasel and I can see him cracking if Simon leans on him a little. We have to remember that Gregory is out for Gregory first, and I’m willing to bet that he’s still a little miffed with the existence of Sasha and Maggie. Speaking of Maggie, remember when it seemed like people on the Hilltop wanted her to be leader? Or when it was sort of implied by Jesus? Yeah, it’s been a while since we’ve been back here but I’m willing to bet we see a little more of that tonight. Especially if Gregory tries to give up Daryl. There are certain things you don’t do on The Walking Dead and one of them is selling out Daryl Dixon.

Elsewhere it appears that Jesus is on to Sasha and Rosita’s master plan of taking out Negan with a sniper rifle. Don’t be fooled, I say “master plan” with the up most sarcasm. If we can be honest with each other for a moment, does anyone see Negan dying right now? More importantly does anyone see Negan dying right now by someone whose name doesn’t rhyme with Shmich Shmines? Yeah me either. Rosita has been trying a little too hard to have a purpose lately. She’s been our bomb expert, imposing force that gets bullets made, sassy to Tara for no reason at all, and just rogue agent willing to do things that will probably get her killed. Kind of reminds me of Sasha from awhile back. Honestly, this plan is garbage and is going to do more harm than good. The Kingdom seems to be in on Operation Fight the Saviors and you got the Whisperers (sorry trash people… I keep doing that. I better be right about this) which means this war is coming (in season eight!). All this assassination attempt is going to do is screw things up… and probably get someone killed. 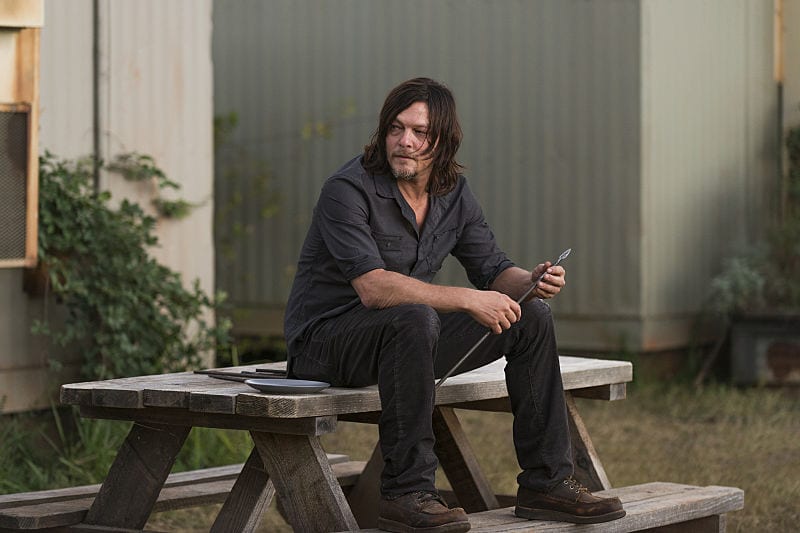 With three episodes left of the season expect things to ramp up a little. I’m still holding out that this show will do an episode where we can see all of the characters, but that looks to be something to hope for next week. This week it looks like the Hilltop only. I’ll be happy to see Simon and his mustache back as he’s one of my favorite Saviors. Dude just makes me feel uneasy.

What do you expect to happen tonight Geeklings? Will the Saviors find Daryl? Will Maggie take charge of the Hilltop? Could Sasha and Rosita actually pull this assassination attempt off? Do you remember Carl? Where the hell has he been?! Sound off in the comments below. As always you can find me on Twitter @iamgeek32. Happy viewing everyone and many huzzahs!

Home » Featured » Walking Dead Preview- “The Other Side”