Last we saw of Father Gabriel he was sitting in a Savior cell looking very very sickly, rambling on about how he and Eugene have to get Maggie’s doctor back to the Hilltop. What’s still left to be answered though is why is Gabriel so sick? He and Negan had just escaped the trailer in front of the Sanctuary by using the ol’ classic walker guts trick and they both seemed fine, so what could have happened in that short amount of time? Let’s dive in! 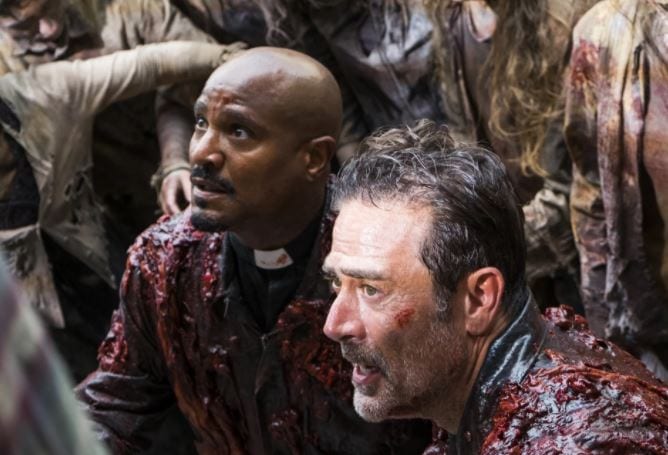 The most obvious answer to Gabriel’s sudden fever would be that he was bitten during his and Negan’s escape, but what if it’s something else? What if the walker guts trick that we’ve seen for seven seasons doesn’t work as well as they think it does?

While the two are gutting up, Negan alludes to the fact that he has lost some people to sickness from doing the walker disguise, which is a question many fans have pondered over the years. Aside from the absolutely horrible smell, if there are no ramifications to doing this why isn’t everyone doing so? So, whether or not this theory pans out, at least Negan settled the score on a long-standing continuity error.

Negan: You ever done this trick with the guts before? These are putrid, decaying organs. Dead blood, piss, shit that’s been cooking all day in the Virginia sun. Any of your people ever gotten sick from this?

Negan: Look at you lucky shits.

However, it seemed like a very random line to just throw in there if it wasn’t going to be important and thanks to Reddit user Zorbinski we may have even more insight into what is wrong with Gabe – radiation poisoning. Check it out below!

The way I interpreted everything is that the walkers around this area are irradiated from the chem plant. THAT is why Gabe is sick, and Negan made the comment on how everyone gets sick from gutting up- to which Gabe replied, “We’re from Georgia.” It’s a joke, but it’s also true to the situation. I don’t think the Saviors know that those barrels are dumped in the woods, or realize the walkers are getting radiation from it.

They’ve been building this “mysterious dangerous substance” now the whole season. Carol and Ezekiel came across the walkers that were glowing or whatever (and commented on it). Shiva saved Ezekiel, and the camera panned over to the barrel in the creek. Negan and co are always mentioning “The Chem Plant.” Then finally, Negan warns Ezekiel about getting sick from wearing guts – but Gabe doesn’t know about the irradiated walkers… Everyone saying “It’s inconsistent” isn’t picking up what they’re putting down. THESE zombies, AROUND THE SANCTUARY, are irradiated and toxic, as a result of the Chemical Plant nearby. Father Gabriel isn’t faking, he doesn’t have heat stroke, and I would even go as far as betting he WAS NOT BITTEN . . . . He has RADIATION POISONING. Or something similar- related to the chemicals spilled out and getting in the walkers.. . . Negan has him put “gently in 2” because he knows what’s going on since it’s happened before- You get “Sick after Blood Cover!”

The theory definitely adds up. The chemical plant has been mentioned just about as many times as the satellite station has by the Saviors and we’ve surely gotten enough clues from Carol and Ezekiel’s time in the woods this season. It was easy to brush off the radiation poisoned walkers during Shiva’s death as just another type of unique walker to add to the many variations we’ve already seen, but it’s starting to look like they are going to be a lot more important to the plot than just a ‘woah’ moment. Especially if they are infiltrating the Sanctuary courtyard where Rick intends for everyone to meet for the final battle.

What do you think about this theory? Whether or not it’s true hopefully Gabriel can hold out long enough to save Dr. Carson and fulfill his desire for a “purposeful death.”

What Does the Letter ‘A’ Mean for ‘The Walking Dead’?