Well, it looks like that original Atlanta group can officially add a fifth survivor to their ranks. After six seasons, a familiar face found his way back into Rick’s life as Morales held him at gunpoint in the Savior’s church compound this past episode.

Morales joins Rick, Carl, Daryl, and Carol as the only characters remaining from the Atlanta group back in Season 1. This also makes Morales the third character out of that original group to become an antagonist alongside Shane and Merle and the second one of Rick’s people to become a Savior, joining Eugene. 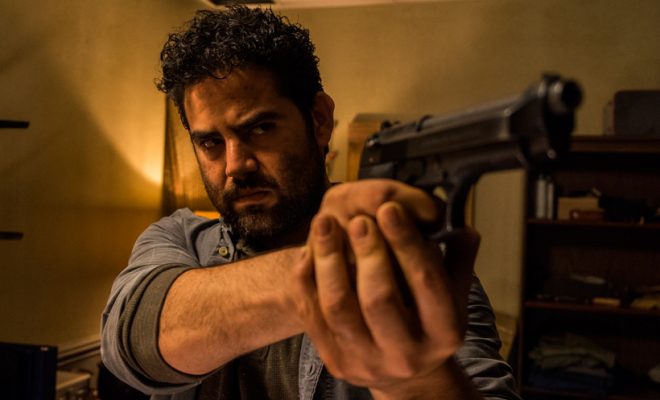 Morales was relevant a really long time ago on The Walking Dead, so long ago that you may not even remember him. So, just who is Morales and why did the writers decide to bring him back six seasons later? Well, that’s what we are here to figure out!

First, here’s a quick recap of Morales on The Walking Dead. Morales was part of the group that went on the supplies run to Atlanta including Glenn, Andrea, Jacqui, Merle, and T-Dog. After Glenn brings Rick back to the department store, T-Dog and Morales appear wearing armor, take out some walkers and successfully lead them inside. Later, he watches from the roof as Glenn and Rick set out to find some getaway cars and safely makes it on to the truck heading back to the camp. 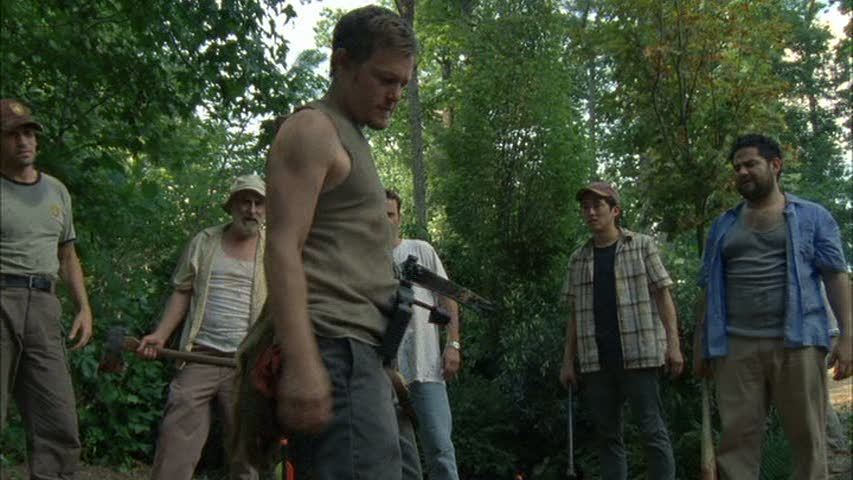 Morales makes it back to the camp and reunites with his wife Miranda and two kids, Louis and Eliza. While the group is discussing how to handle the Merle situation, Morales says that they have to tell Daryl what happened.

Remember that awesome speech Dale gave about why he rewinds his watch every day? Well, it was Morales that asked him about it. Later, when the camp is swarmed by walkers, Morales helps fight them off. Ironically, his weapon of choice was a bat. 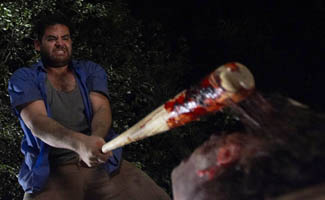 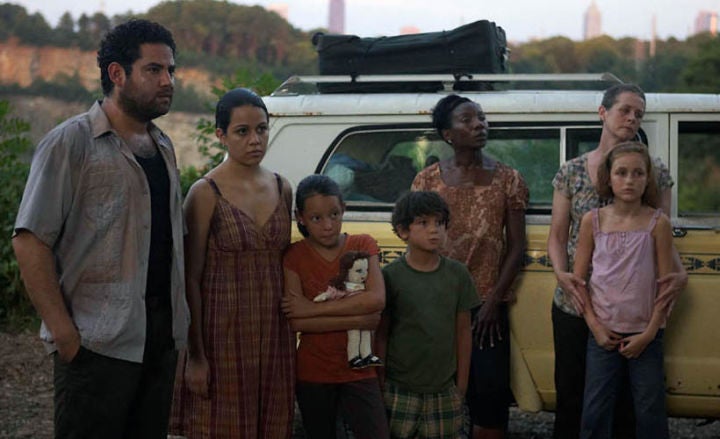 While Rick & Co. plan to head to the CDC, Morales and his family make the decision to head to Birmingham in hopes of finding some members of their own family. Since this was before the “Ricktatorship” Rick gives Morales some supplies before the family drives away. 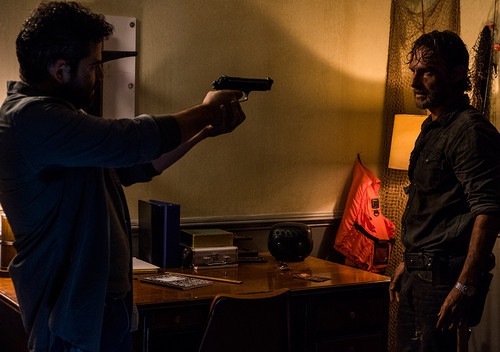 While in the middle of an ‘all-out war’ Rick and Daryl head to a Savior compound, which according to Dwight’s intel is where they are storing their guns. Unfortunately, that doesn’t seem like it’s going to be the case. After Rick takes out a Savior and discovers he was a father protecting a locked room with a baby in it, he comes face to face with Morales who has him cornered at gunpoint.

Rick is clearly shocked to see him because last he (and us) knew, Morales was heading to Alabama. So, just what has transpired over the years that would find his once ally not in Birmingham, but in D.C. as one of Negan’s men?

Morales’ return was pretty shocking, but he does fall under the “if you didn’t see them die, chances are they will be back” umbrella. He was just easy to forget about over the years as he hasn’t been in the past 95 episodes of the show. Season 8 marked the series 100th episode, and we had been warned that it would be full of callbacks and Easter Eggs throughout it. While it would be easy to chalk Morales’ appearance up as just that, I think that he is going to have a much bigger role as time goes on.

At this point the last thing that The Walking Dead needs is another character, I think we can all sort of agree on that. So, what is the point of bringing him back at all? For one, I think that Morales is going to be an example to Rick of just how different things could have gone for either him or anyone in his group. It shows that in this crazy world anyone could have found their way into Negan’s ranks if they had made one small decision differently. 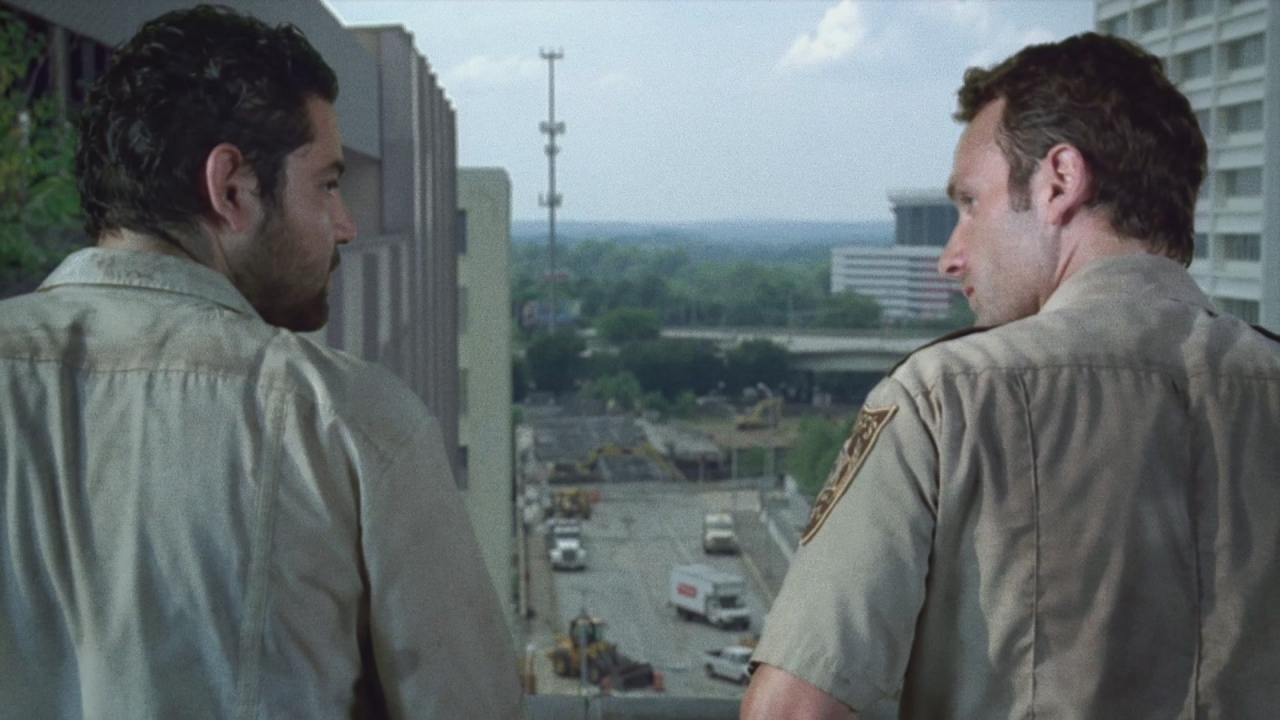 As fans, we know Morales. We know that he is not inherently evil like Negan and a lot of the Saviors. He was a family man who had values and loyalty and just wanted to keep the people he loved safe. The obvious assumption is that something probably happened to his family along the way leading him to Negan. You can imagine when he hears from his leader that there is another group murdering Saviors left and right that Rick looks like the bad guy who has completely lost it and he is the one who is on the good side.

So, as viewers, we know that Morales is good at heart. It would make sense that the writers are using Morales, in addition to the baby that Rick found, as a means to attempt to humanize some of the Saviors. Aside from Negan’s wives and Dwight, we really haven’t been given any reason to not say ‘kill them all, Rick!’, but these two things definitely shine a light on the fact that not all of these Saviors deserve to die – they just don’t know anything else or they’ve seen how bad it is and found safety with Negan.

Morales has just provided a human face to this war for Rick and I, for one, am looking forward to a little backstory as to how Morales found his way to Team Negan, to begin with

What are your thoughts on Morales’ return?

Fan Fest Community: Our Favorite Seasons of ‘The Walking Dead’