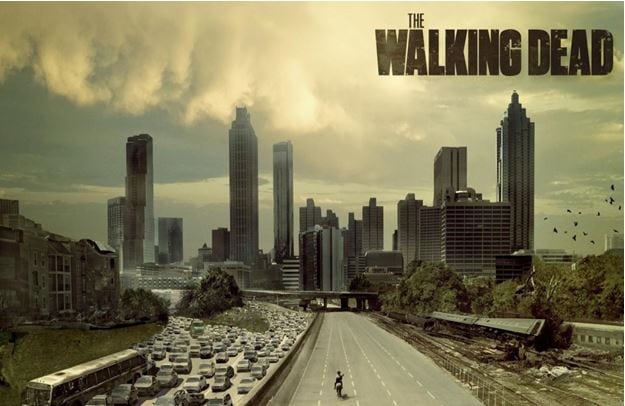 Earlier this month we asked our Fan Fest & Walker Stalker Con community what their favorite season of The Walking Dead was and we received a ton of awesome answers! 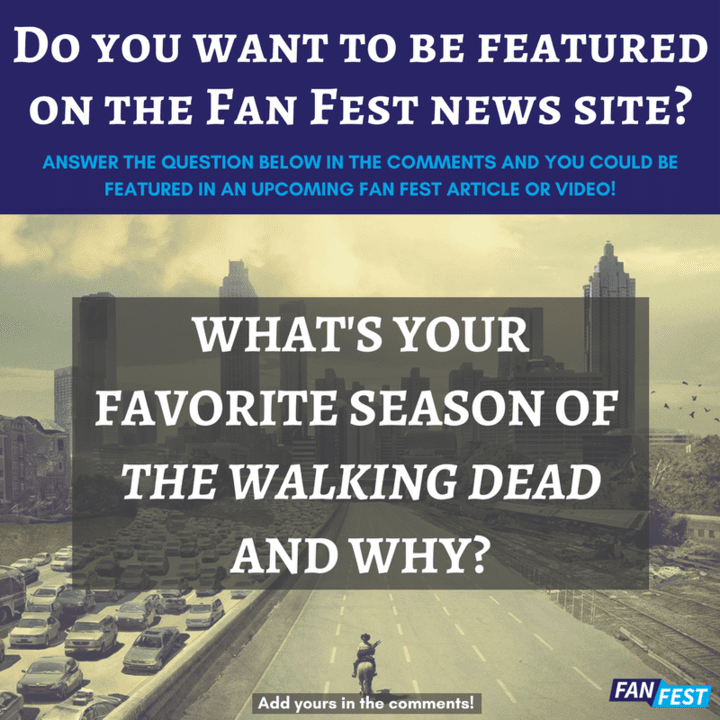 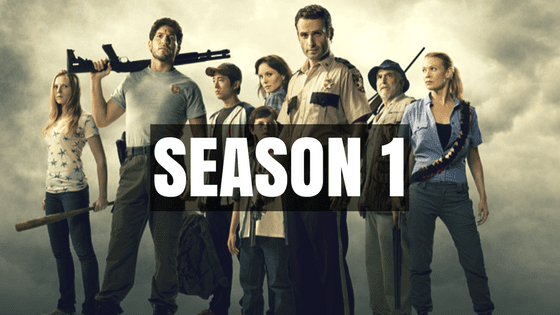 Season 1 because the confused horror and terror Rick experiences is so raw. He has to grow so quickly as a person and a leader and adapt rapidly to everything around him from the situation to the people; it’s so intense. The carnage is shocking and frightening in season 1 because it’s seen from the perspective of someone who fell asleep in a normal world and woke up in a rotting, flesh-eating hell full of betrayal, while in later seasons it’s expected and doesn’t have the same effect on Rick or the other characters. I also love how it shows how drastically people change into their true selves in every man for himself world. Before he got shot Rick and Shane were like brothers but mere weeks later Shane tries to kill him over his own wife. Overall I think season one was very powerful and vivid with a lot of things to chew on philosophically.
–nestor_i_am_adorable

I love season one because that’s where it all began. I enjoyed the cinematic quality of each episode, and to this day I still think the pilot is one of the greatest TV episodes of all time.
–Gina Pellicano

Seasons 1 & 2 because it’s all about surviving. The walkers, food, water, and shelter. And doing it as a group. No wars with other groups!
–@KarenwhiteKaren 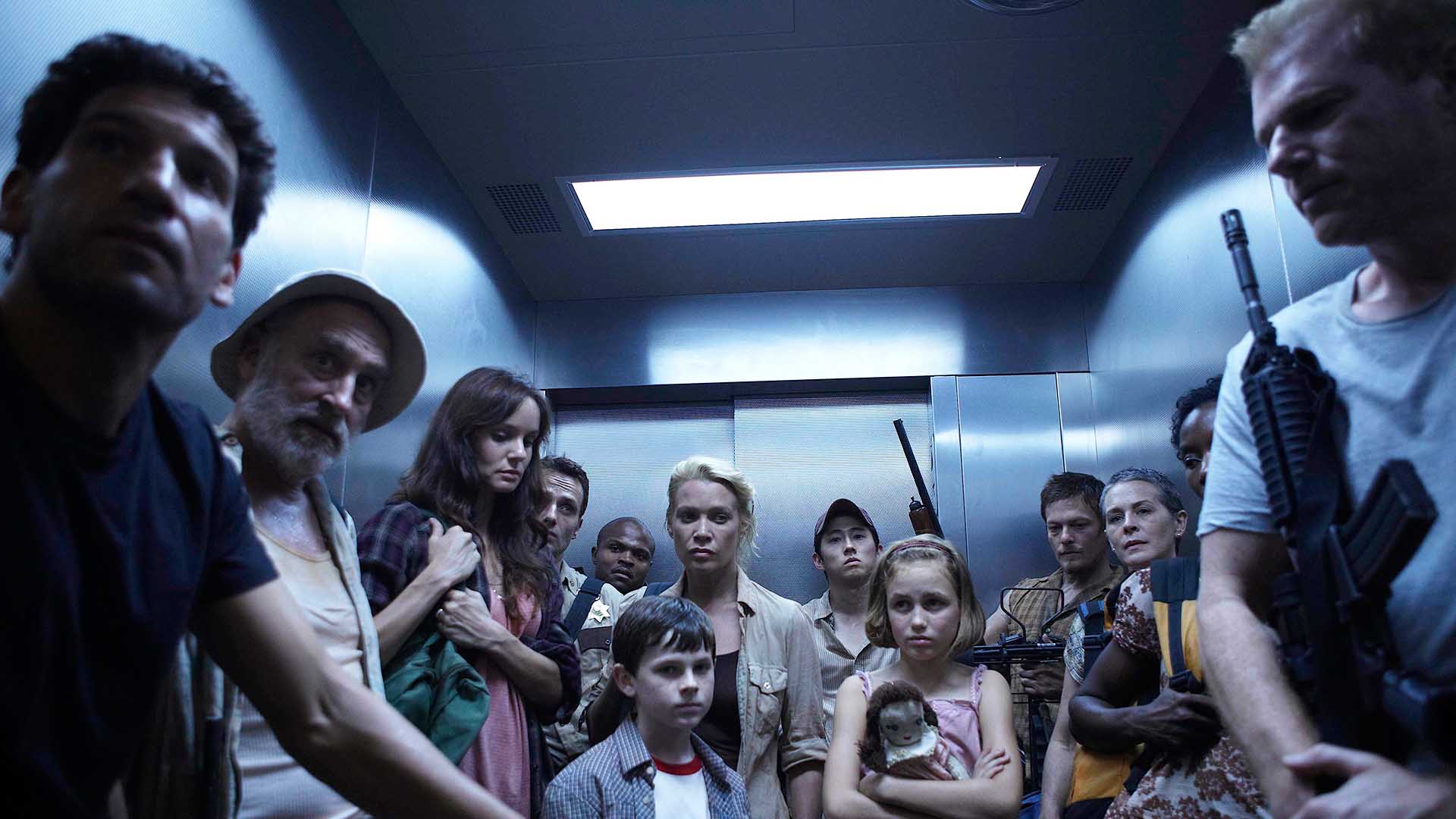 Season 1 when Rick wakes up and the world is crazy. It’s where it all began and survivors started getting together.
–Sandra Broadhurst

Season 1 as it was new and fresh and you didn’t know what to expect!!!
–Elizabeth McQueen

Season 1 –  snagged my attention right off the bat, my favorite moment, Glenn in that red car, he was having a blast!!!
–Donna Murphy

Season one, the beginning of Rick’s story was captivating and it’s cool to see how far he has come in the show thus far while still holding on to who he was in the beginning of the show.
–saviorsweetheart

Season 1, was the start of the best series on TV for a long time 👍👍
–Ali Dunnicliffe‏ 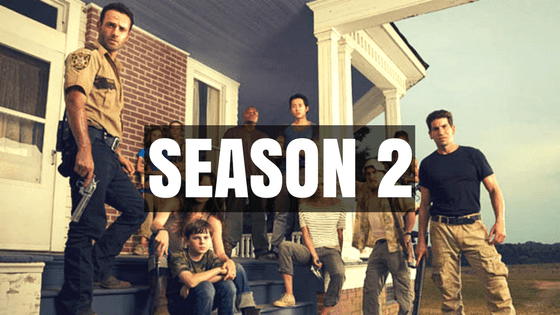 Season 2! Where we start to see the reality of the virus and how far the group must go in terms of staying of alive!
–nadia_a.photography

Season 2- It when you see the bonds of the “family” start to form.
–blueyes_smiling

I think two. The premiere was one of the shows best and everything with Shane. I miss that character. Added a great dynamic to Rick Co.
– @iamgeek32

2 because it had a smaller cast, the interpersonal relationships were strongly formed, loved Hershel’s farm, & newness of the apocalypse.
[email protected]amyhcmc

Season 2 will always be my favorite. Getting to know and care for the characters. And the barn scene..gets me every time.
–@Raylene515

S2- great character development that is still paying off. No obvious villain, but one of our good guys losing his way.
[email protected]

Season 2. Because it truly felt like the group had become a dedicated family unit in that time and were bonded so strongly in shared tragedy.
–James Tyson

Season 2 loved them being at the farm. Daryl changed and became my favorite. When he was looking for Sophia and then when she walked out of the barn and Carol ran towards her and he held her tight. Watched all the seasons about 5 times now but that’s still my favorite.
–Amanda Evans 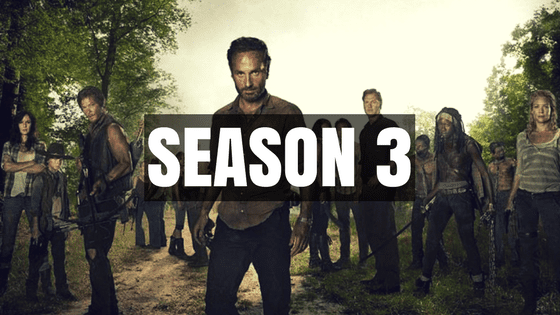 Season 3 for me, for odd reasons. I hated watching them lose their humanity and it made me question everything about how would I behave in that world. The episode where Rick, Michonne, and Carl see a lone backpacker waving for help when on a supply run, ignore him, and then on the return see his remains but also the backpack and just pull over, take the backpack and don’t have any dialogue, made me sick to the bottom of my tummy. I thought it was a genius way of making the point of where they all were mentally. I found Season 3 so challenging but because of that, it’s become my favorite.
–robokirk22

Season3 because I really enjoyed the pace & storyline, it was an introduction to an enemy that wasn’t just walkers, people were still threats.
–@ajenn860

Season 3. The storyline with The Governor and Merle was so good. I loved seeing Merle’s redemption plus we were introduced to Michonne.
–@kate_mccrea

Season 3 when they find the prison and finally find somewhere to make a home.
–Lizzie Hamshare

#TWD S3 was my fave the world started to expand and walkers were no longer the main danger.‏
–@coeysmrs 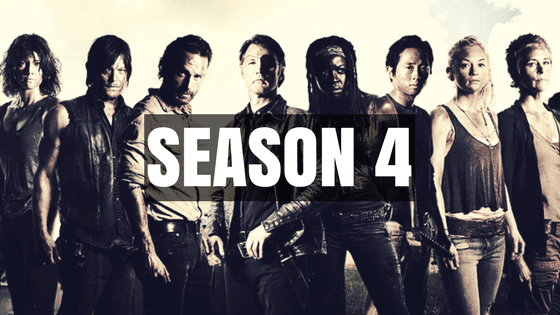 Season 4. They found a home, something they deserved. They managed to maintain that home and take a break from the outside world. Every single character developed that season and they found out what family really meant to them. I mean, they found each other again and didn’t give up. That’s family.
–h_olly_g

Season 4. Nuanced character development for everyone and it culminated with an excellent, suspenseful finale. (And a great cliffhanger.)
@AshActually 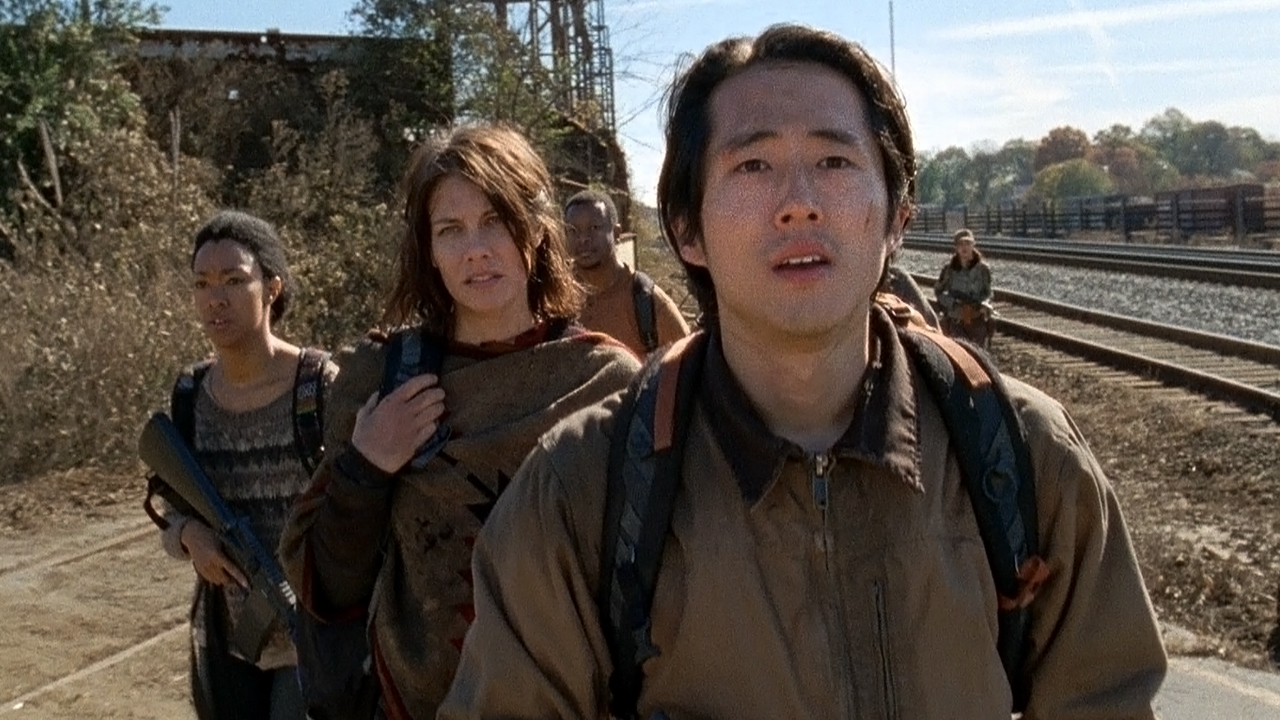 S4 as we got to see smaller groups in deeper character development on their way to Terminus. “After, The Grove, Still, Claimed” mini-movies!
[email protected]_hicks

Season 4 life in the prison, lots of action and storyline.
–John Coleman 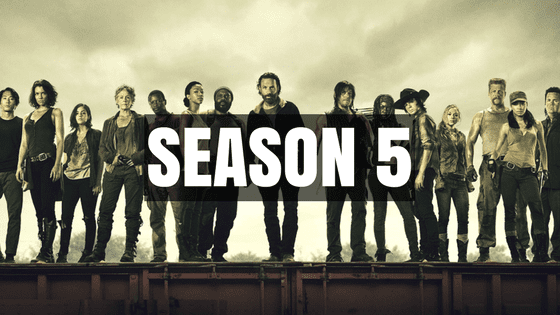 Definitely Season 5! This is when they are on the move again and we are introduced to some important new characters. The episode one opener was terrifying. So suspenseful. Carol was a badass in that episode and they fought their way out to reunite. They work together on the road and lose some important “family members” and ultimately come to live in a new community with the group they have now-which has been my favorite overall cast of characters so far. Season 5 set us up for so many things to come and there was never a dull moment! Some amazing acting in season 5.
–sophiakayphotography

I love season 5!! The reason I love it is because it shows how much of a family they have become in a world that is messed up. We meet new characters that turn out to be important to the show and the viewers. I love how in this season that no matter what happens that they always stick together no matter what happens, I think in this season they take their acting skills and take it up ten notches and make their character seem like I wasn’t even watching a show anymore, like I was watching something that was going on in real life (hopefully that made sense).
–alexcarnoali

S5! The transformation of my fav Carol. She adapts quickly to survive from blowing up Terminus to cardigan cookie baking badass. 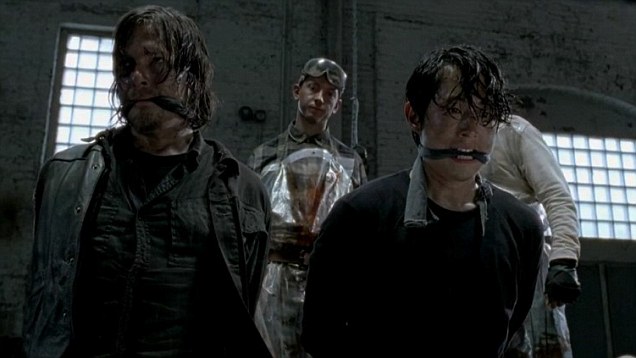 Season 5. Seeing our people escape Terminus thanks to Carol and their journey to Alexandria. During that journey, Rick finally sees his daughter was alive and well (at that moment before the big reveal lol) Sasha reuniting with her Brother. They’re Journey to Alexandria through a storm, no food, no water, eating dogs, Rick fulfilling his promise to Gareth (red handle machete). The deaths our beloved characters Beth, Tyreese, Bob, etc. Meeting Father Gabriel, Aaron and the rest of Alexandrians. Great Season!
–Sheronia Campbell

Season 5 for sure! This is where you get to see them all broken down and at there worst but amongst everything they all find each other. They work as a unit and look after there own! Of course you have the return of Carol Boss Lady! The moment that she returns Daryl’s crossbow to him heartwarming as well as Judith being brought back to Rick and Carl beautiful. Also, the most action-packed series and were you learn that so many more people survived and are remaking the world. That season makes me think that they can rebuild the world now that it’s broken!
–Toni Harrison

Season 5 was my favorite season. The season premiere was the best of the series, the group gets reunited and we finally make our way north to DC.
–om420

Season 5! So much happened in season 5. The premiere episode is one of the most action-packed, episode 3 (4walls and a roof) is amazing. Losing Tyreese and Beth in back to back episodes was crazy

😢 Episode 12 (Them) is one of my all-time favorites, the scene in the barn when everyone is trying to hold the door shut is one of the best in the series. And of course, they get to Alexandria and Morgan reunites with Rick. I’m a die-hard fan of the whole series, but if I have to pick a favorite season- definitely season 5.
–Terese Sprecher-Atkins 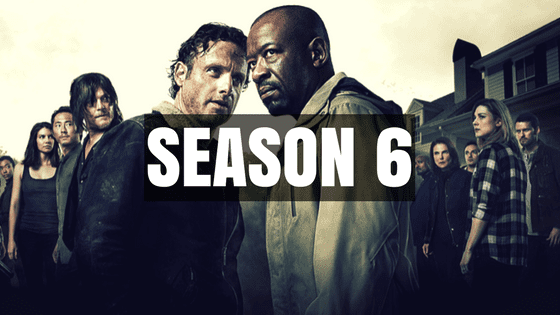 Season 6! Balls to the wall from episode 1. Episode 9 is the best episode of TWD 😮. The outpost scenes went dark 😱. Final scene was 👌
-Sean Blackmore‏
–@SeanBmore91

Season 6. Had a lot of action and the writing I felt was very good. The acting in season 6 was outstanding. Felt every emotion.
–@verng90

S6b was my favorite! Especially bc of Jesus 💪
–Aby‏ @abigail_ht 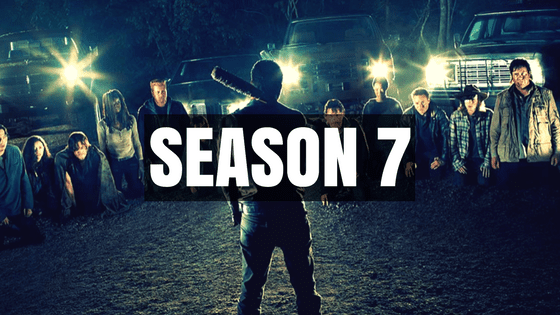 I loved season 7 the best. This is because of the huge build up to who did Negan kill. Also, I loved how there was a video for each character so it wasn’t spoiled by anyone!
–xxscaryterryxx

This past season was great the acting especially the season finale which had me on the edge of my seat the whole episode! When Shiva came out and saved Carl I was jumping like school girls.
–@patba1968

Season 7…it’s much better if you binge watch it. Plus, love Negan…such a charismatic character you love to hate and hate to love.
–Anna Jones

Season 7. Bringing Negan in as the badest antagonist ever in the WD World.
–Terri Whitley

My favourite season is Season 7 because we (the fans) are properly introduced to Negan the newest villain for the Alexandria group and Jeffrey Dean Morgan does an amazing job playing as Negan.
–Jey Stubbs

Season 7, Seeing the best villain in all of comic books come to life was incredible. Also awaiting what is still the best comic book death and most brutal killing of Glenn was well worth it. (If you didn’t know about Glenn’s death; you have had over a year).
–John Henrich

Where do you think Season 8 will land on your list of favorite seasons?