This Is Us is definitely the most emotional and cathartic show on television right now. It’s nearly impossible to not cry as we follow the complex and impactful lives of the Pearson family. It’s basically common knowledge that before you tune into the Emmy nominated NBC show that you will most definitely need a box of Kleenex right next to the remote.

On Monday night some of the cast sat down with Vulture at their For Your Consideration event in Los Angeles and opened up about how much the show affects them as well. See, you’re not alone!  Take a look below at some of the things they said.

The show has made me feel things that other work that I’ve done haven’t — as well as it’s happening at a time where I feel more connected to my emotions just as a human being. You hit 40, and you start just thinking about life a little bit more, those moments that you want to capture and hang on to, and then hopefully experience again and relive, but you know you can’t ever get it back. So you just have to live every moment as fully as you can, soak it in and put it in a nice little glass box in your memory, and hopefully revisit it in a quiet, reflective moment. It gets me. It definitely gets me.

I have to watch episodes alone, and I’m not kidding — because it’s not cute when I cry, and I really get into it. It’s layered because it’s such beautiful work, and then they’re my friends, and then there’s beautiful stories, and then I’m like, “Yeah, I shouldn’t be doing this kind of crying with anybody else.”

It’s gotten me teary-eyed, it brings out emotions for sure. The interesting thing is, you’ve read it and you’re in it and you’ve watched it, and then you watch it again and you know what’s coming, and you still kind of get welled up. It’s just a really well-written show. 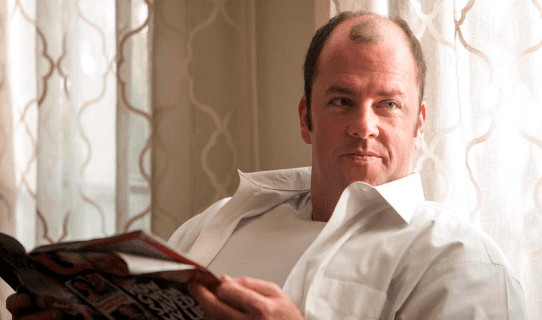 I’m a pretty easy cry, but I give it that 1946-World War II-father single tear. My favorite scene is Kevin running to get his brother Randall. That really got me. Or the push-up scene in the gym with little Randall on Jack’s back.

Yes, I will admit, absolutely. Here’s the disclaimer: When I’m on an airplane, I kind of cry at everything. I don’t know what happens to me on airplanes. I think it’s the altitude. I cannot control it. That being said, I’ve also cried in my living room on the ground at This Is Us. So yeah, it got me. It’s probably the Randall story — I find it just so moving. I have an African-American son my husband and I adopted, so I really key into that story and that kid.

Reading the script makes me cry. So yeah. Watching the show definitely does. I’ve given up [fighting it] — so now I just embrace it: I’ve invested in Kleenex.