The Walking Dead just released a new trailer for the Season 10 Finale! If you’re like us, you’re itching for any news on the show and what viewers may expect. Being billed as a one-night-only event, this episode looks like it’s going to be epic! But it’s teasing a major character death and we’re starting to worry!

A #TWD Special Event – One Night Only

WE ARE ALMOST THERE #TWDFAMILY!

The Walking Dead and Season 10’s Finale, “A Certain Doom,” by title alone alludes to the fact that at least one character and we’re going to break down who likely lives and who dies in the episode.

We last saw Daryl in the woods with Judith when they heard Father Gabriel on the radio signal to them that they were about to be surrounded by walkers and the Whisperers.

Let’s face it, Daryl Dixon isn’t going anywhere on this show. As the last remaining male lead from the first season and the most popular character remaining on the show, if Daryl dies, they will riot. AMC knows that if Daryl goes, what’s left of its viewership ratings will go with him. Reedus is loved by both the guys and girls for his style and looks and Showrunner Angela Kang would do great damage to what’s left of The Walking Dead Universe if Daryl were killed.

As we just said, Judith (Cailey Fleming) is with Daryl and the pair are being called to return to the hospital where everyone is surrounded. Judith’s odds of survival are equal to those of Daryl. Judith remains as the last great hope for the Grimes family on The Walking Dead. Yes, I’m not discounting R.J., but he’s barely been shown on the show and the writer’s focus has definitely focused on Judith. For this same reason, R.J. isn’t going anywhere either. You can put money on the fact that Rick, Michonne, Judith, and R.J. will be standing on the front porch of some house that resembles Hershel’s farm when the sun finally sets on The Walking Dead.

Carol (Melissa McBride) is last seen inside the hospital with the other Survivors. They’re all surrounded by Beta, the Whisperers, and walkers. There have been hundreds of articles written on why Carol’s time is up on The Walking Dead. And they’ve all been wrong!

They’ll continue to be wrong.

Like Daryl, Carol is the most popular remaining female lead on the show. Although it’s rumored that she only has one more year on her contract, Carol will be returning for Season 11. There’s absolutely no way she’s killed off.

From the Season 10 Finale trailer, it appears that Maggie (Lauren Cohan) is about to find Carol’s note that they are in need of help. Maggie (and possibly the Commonwealth, where she’s been) will likely come to the rescue of our Survivors. With Maggie’s return, there’s absolutely no way she dies in the finale. Plus, it’s already been announced that Maggie will be returning in Season 11 as a regular cast member.

Eugene (Josh McDermitt) is headed to the meet up with Stephanie, the girl who is on the radio. Much like Carol, Eugene’s death has been predicted over and over again. However, Eugene is vital to the show’s future. His knowledge of science and technology, although not the cure to the walker virus, is important to the continued story of recovery of the world of The Walking Dead.

We JUST met Princess (Paola Lázaro). She’s too interesting. They won’t kill her. It’s too soon!

Negan (Jeffrey Dean Morgan) was last seen in the hospital, surrounded by Whisperers and walkers. As well, Negan just had a long, heartfelt conversation with Lydia.

Negan isn’t going anywhere. However, is odds are slightly higher for one reason. There is a rumor that he’s joining the Amazon Prime show, The Boys. There has been some speculation, as well as Morgan’s own campaigning for a role on the show, that has led some to believe Morgan is already on his way out.

This would somewhat correspond with Negan’s disappearance in the comic book (we don’t want to spoil too much here if it’s true).

Luke (Dan Fogler) is last seen in the hospital as well. Although we don’t see Luke very often, he’s a character that most fans enjoy. As well, Fogler is somewhat of a favorite of the show’s creator, Robert Kirkman, and universe runner, Scott Gimple. We think they are happy to have him pop in every few episodes.

Yumiko (Eleanor Matsuura) is headed with Eugene to meet up with Stephanie. She’s another character that we don’t see a whole lot that would indicate that her days are numbered on the show.

Lydia (Cassady McClincy) just had an emotional conversation with Negan. However, she’s also stuck in the hospital. Currently, as the sole teenage character on the show, we don’t think that they’ll kill her off just yet. However, the only scenario we could see her dying in would be one where she sacrifices herself to end the Whisperers, who her mother, Alpha, created. 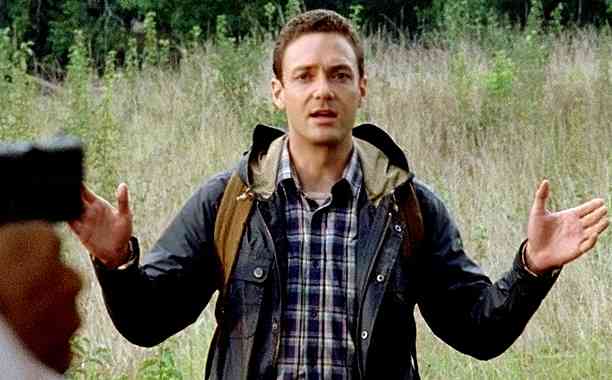 Please don’t kill Arron (Ross Marquand)! Not only is Aaron a great guy, but he has a daughter on the show. It’s not Aaron’s time! We see him surrounded by Whisperers in the woods with Alden. However, we suspect this is where either Maggie or the Masked Stranger will appear to save the day.

[Read our article on who we think is under the Mask]

Magna (Nadia Hilker) is also in the hospital, surrounded by Whisperers and walkers. The only reason we suspect that Magna may not survive is simply because we expect this to be a massive battle. We were already teased with her death once this season when she was in the cave when everything collapsed.

Where is Rosita (Christian Serratos)? Has anyone seen Rosita? Here’s the reason we think Rosita is done: she’s about to take on the lead of the new Netflix Selena series.

Much like Magna, Kelly (Angel Theory) is a likely candidate simply for the fact that this is going to be a massive battle with the Whisperers. The Walking Dead usually kills off secondary characters in episodes like this and it feels like this may be Kelly’s end.

Ezekiel (Khary Payton) is on his way with Eugene to meet Stephanie. Unfortunately, Ezekiel believes that he has thyroid cancer. We think this could come into play in several ways. First, if he believes he’s going to die, he may sacrifice himself to save the others. Or second, we think that he’ll receive some good news from Stephanie – that the Commonwealth has doctors and the ability to treat his cancer. We’re hoping for option two!

Jerry (Cooper Andrews) is also in the hospital and surrounded. Unfortunately, we think that Jerry is the likely candidate to be the hero. It’s going to take something massive to make their way out and we think that Jerry gets his Game of Thrones Horder, Hold the Door!, moment in the Season 10 finale.

Alden (Callan McAuliffe) is surrounded by Whisperers in the woods with Aaron. If, what we anticipate it either being Maggie or the Masked Stranger, he isn’t saved, we believe that he’s more likely to die than Aaron. With Enid (Katelyn Nacon) no longer in the picture, he may fight out of anger or just no longer be necessary to the show’s story line.

Father Gabriel (Seth Gilliam) is in the hospital, surrounded by Whisperers and walkers. Unfortunately, it’s time for Father Gabriel’s death. And we think it will go down just like the comic book. We won’t spoil that for you here. You can read about it here if you’d like. Otherwise, it’s just time. And it will work in this story line.

Much like Father Gabriel, Beta’s (Ryan Hurst) time is up on The Walking Dead. This will be the battle that will end the war with the Whisperers. As well, it fits perfectly with the comic book. As Season 11 brings us into the Commonwealth and a much larger world with Maggie’s return, it means an end to this chapter. The days of the Whisperers are over, including Beta’s.

What do you think of this pecking order and the reasoning behind it? We believe there will be several deaths in The Walking Dead Season 10 Finale. If we had to guess, we’d go with Beta, Father Gabriel, Alden and Ezekiel as the most likely to see the end of their run on the show. And, we think so for much of the same reasons above.

NEXT ARTICLE: What character from The Walking Dead is likely under the mask of the Masked Stranger we see in the Season 10 Finale trailer?