Over the course of eight seasons, there have been a number deaths on the Walking Dead. Which makes sense considering this is a show where the undead rise up to eat the flesh of the living. If there was ever a plot that was a perfect recipe for character deaths it would be this. Character deaths are often used to either further the story or characters or in the case of Game of Thrones, to cripple you emotionally. Any time a character dies the viewer is given the impression that this universe is unpredictable and unforgiving. Think back over the course of these eight seasons. This show has taken the wings of death and wrapped itself around them almost using them as a blanket. Over the years we’ve had the characters who had to go deaths like Shane and Andrea. We’ve had the “holy crap did that just happen” deaths with Dale and Tyresse. We’ve had the “this character needed to die in order to advance another character” deaths with Lori. We’ve had the “oh god I’m going to throw up because I’m so stressed and sad” deaths of Glenn and Abraham. And now… now we’ve had a death that completely changes the entire landscape of the series in Carl. 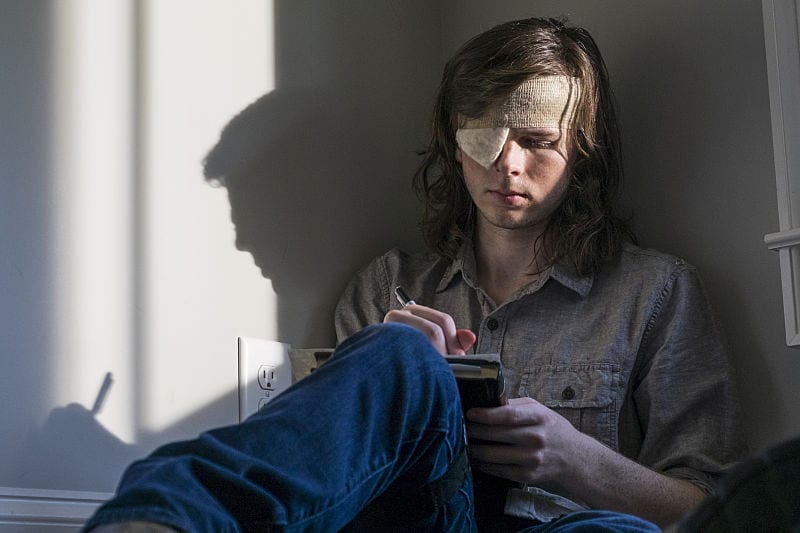 That’s right, after a month and a half off, Carl Grimes has finally passed away and I’m not entirely sure if The Walking Dead is better off for it. Let me get this out of the way first, I thought last night’s episode, “Honor”, was a very solid outing. In fact, I would argue it was one of the better episodes in a season that has struggled to find it’s footing and balance. That’s not to say it was a perfect episode. There were times where it seemed to be a bit too long. The whole Morgan “Gut Remover Extradionare” could have been shortened to focus more on what was happening on Alexandria. And I know this might seem like I’m nitpicking but it’s a problem that has plagued The Walking Dead for a while now. Pacing. There were areas of this episode that flipped flopped back and forth between Carl and Morgan, that just felt flat and distracted from the importance of Carl’s death. Yes, I get Morgan’s half of the story was supposed to juxtapose what Carl was telling his father. How Rick saved Carl from being a little serial killer, and we now have another child who needs that same mentorship. I get all that, all I’m saying is it could have been shorter.

None of that is meant to take away from Chandler Rigg’s excellent performance or the impact of Carl’s death because over the course of the show we haven’t had a death as important as Carl’s before. That’s not to negate some of the other deaths. In fact, Glenn and Abraham’s deaths were more impactful because of the brutal suddenness in them, but with Carl, we had a month and a half to prep for this moment. We knew it was coming. Back when Negan took out Glenn and Abraham we had no idea who was dying. We were robbed of Glenn and Abraham. With Carl, we were given a character who was unfortunately bitten, while doing the right thing, and had made a peace with his death. That opening not only served to set the tone for what was a super emotional episode but to show us that Carl was okay. His death, while sad and tragic, made sense to him and he was willing to get as much of life in before the lights turned out. 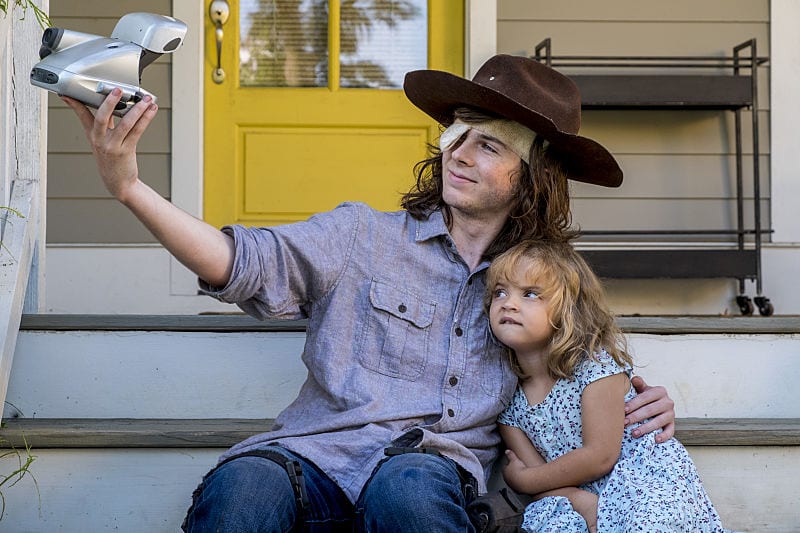 To a degree, I think it was Carl’s acceptance that gave the episode a strange emotional tone. Outside of his conversation with Michonne and Judith, I didn’t really get the heavy heartbreaking vibes out of this episode. When Glenn and Abraham died it was gut-wrenching. There is no doubt that it completely ripped your heart out, and that’s because it was supposed to. The show was establishing Negan as a force as well as letting us know that this world still had consequences. With Carl, we had a character who has been through a lot. Think about it, Carl’s been shot twice, lost an eye, had to kill his own mother after she gave birth to his sister, shot his father’s best friend, and lacked any ability to stay inside a house. Carl has been through the ringer and always seemed to come out the other end. Here, he knows it’s over and it’s his calm and peace that kind of subdued some of the emotional reactions from other characters. Say what you will, but I expected more out of Rick here. Granted, you could argue he was in a state of utter disbelief but think back to the deaths of Lori or Glenn. There was a lot more emotions from Rick there. Here was his son, his purpose for everything, and he almost seemed a bit standoffish.

Maybe it’s the romantic in me but I wanted Rick to swoop up Carl and be there. Not just physically but emotionally too. Carl gave his tremendous speech mapping out his vision for Rick (which happened to be Old Man Rick) and Rick promised that he would make it real. That to honor his son this is what he would do. But not once did it seem genuine. Maybe it was because Rick didn’t believe Carl was actually dying or maybe it was because Rick can’t think about that type of future until the war is over. I’m sure the impact of Carl’s death will be felt throughout the remainder of this season, and perhaps all future seasons, but I just expected more out of Rick Grimes. Carl was a better version of Rick in the end. His courage and heart gave us an impression of what could be had he survived. Carl could have shaped the future that Rick was trying to preserve. His last act on earth was to spare his father from having to kill him when he turned into a walker. This is the same kid who shot his own mother because she was going to turn… the steel within Carl cannot be denied but as a father… I feel Rick should have been there.

Maybe it was the sound of the silencer that made it real for him. Maybe it was having to bury Carl, like so many before him, that drove the point home. But Rick Grimes should have been with his son at the end and a part of me hopes that weighs on him. Carl, as brave as he was, should not have died alone. And Rick now has to deal with a world where his son is gone. His only child, because we all know Judith belongs to Shane, his purpose of living is gone. What do we get for it? Do we get a Rick who is looking to achieve peace to live up to his son’s final wish? No. We get a Rick Grimes covered in blood waking up underneath a tree by himself. Does this mean it will get worse before it gets better with Rick? Possibly. It’s Rick Grimes so most likely. 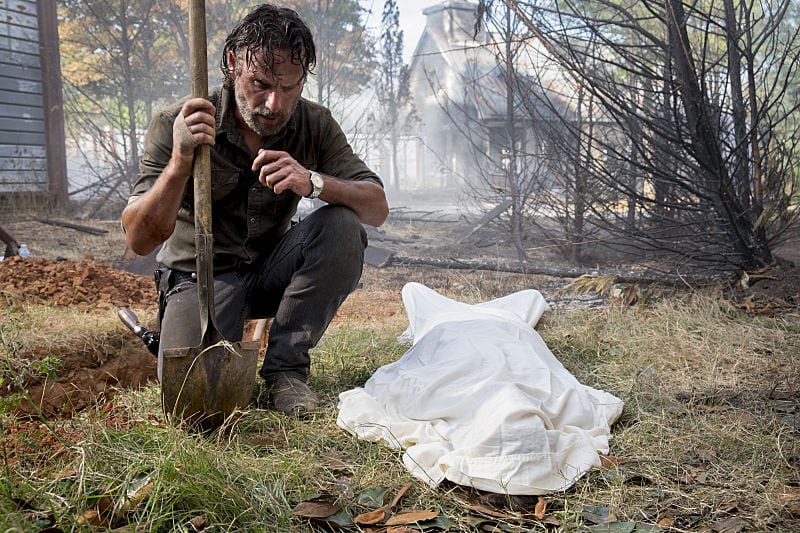 That’s the thing though. We don’t know. Carl’s death has completely changed the landscape of this show. A show that used to be somewhat loyal to the source material has now made it’s largest deviation from it. Last night’s episode not only brought the largest character death in the narrative but also possibly negated another major storyline from the comics, in the Old Man Rick story. Everything that happens from here on out is uncharted territory for The Walking Dead and its fans. The war with Negan will come to a conclusion and I would guess that will end very close to the way it ends in the comics. Outside of that, anything is possible. Carl Grimes’s death opens up this universe to a whole new world of possibilities. Who knows, maybe his death will be one of the best things to happen to the show. There’s a chance that the stories that come from this are more powerful and are weighted in genuine emotion. Or… maybe the show falls off the rails as we learn that Carl Grimes was the glue that held it together. Only time will tell on that accord but in the meantime, we can all agree that Carl Grimes, the kid that drove every fan crazy in the early seasons, will be missed tremendously.

What did you think Geeklings? Was the death of Carl Grimes as heavy and emotional as you expected? Am I being to hard on Rick? Where does the show go from here after straying so deeply from the source material? Sound off in the comments below. If you’d like to talk more Walking Dead with me you can find me on Twitter @iamgeek32. Let’s take a deep breath and try and get through this together. There are still a number of episodes left and the possibility that there will be more casualties. It is The Walking Dead after all…