*This post contains spoilers from season 8 of The Walking Dead. *

A lot has changed on The Walking Dead over the years, but one thing that has always remained the same is the idea that the cast and crew, and even the fans, are all one big family. They’re all extremely close on and off the set, so when a character meets their untimely death on the show, it’s the people who they worked with every day that truly feel the loss of their departure. This rings overwhelmingly true when it comes to the show’s latest death of Carl Grimes. For eight years we’ve all watched as Carl grew from a boy to a man and the cast and crew watched as Chandler Riggs did the same. 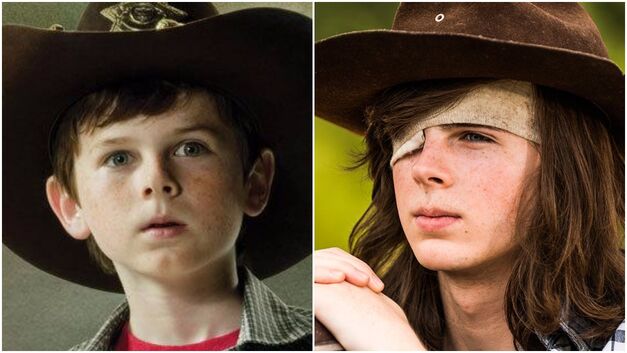 Before, during, and after Carl’s final episode some of our favorite cast members took to social media to say their goodbyes to the character and the wonderful man that played him. Check them out below!

SPOILER (for the six people that are somehow in the dark… and get news from Instagram?) @chandlerriggs5 man…. what a pleasure. Not only getting to work with you… but, getting to know you. You, my friend, are an incredible young man. Well before joining this cast I was a fan… a fan that loved watching you grow up in front of a camera. From the moment you first put on the way too large sheriffs hat as a boy… to the end, the hat so befitting of the man Carl had become. Wiser and more compassionate than all of us. You held all of our hearts. Honestly… a huge reason I wanted so badly to join this band of misfits… was because I was such a fan of the Negan Carl relationship in the comics… that storyline was one of my favorites, as I know it was one of yours. I’ll forever be dissaponted we only scratched the surface of what could have been. BUT… I can take total solace in the fact that you are out there… doing your thing. You’ve grown into an amazing young man as well as a powerful actor… the world is your oyster Riggs. We all get to sit back and watch you kill it. So.. know you are missed on the show… but know you have a big ole group of family all here for you if needed… and eagerly awaiting whatever comes next. Love you Riggs. See you soon.

I’m certain I’ve never felt such a mix of surreal and real at the same time #TheWalkingDead#Carl#RickGrimes#ChandlerRiggs#AndyLincoln oh, the heart. #Beautiful and #Heartbreakingpic.twitter.com/tKij4PpwxI

See you around, kid. #twd#thewalkingdead#andyetismilepic.twitter.com/9HhuRei94w

This is the only photo I have to share of Chandler and me together but I remember my first day on set and meeting the super cool, down-to-Earth guy that is @chandlerriggs. The world is yours, man. Go grab it by the horns. #TheWalkingDead @WalkingDead_AMC @AMCTalkingDead pic.twitter.com/cATwep9hGB

And of course, Chandler Riggs

my final episode of the walking dead airs tonight.

i’ll be on talking dead afterwards to elaborate on how much the cast, the crew, and the show as a whole meant to me.

i hope i’ll see you there.

none of us could have done this without you. it was always for the fans, and it always will be.

so thank you for giving me this chance to let me pursue my dream and continue to make you angry, sad, happy, and everything in between.

i won’t let you down.

this is from around may 2010, when i first took on the role of carl – it was also the first image published announcing me as a part of the cast. since then, you have given me this incredible opportunity to help tell a story that impacts people in so many ways. you gave me a chance to do what i love to do. so thank you for letting me pursue my dream and continue to make you angry, sad, happy and everything in between. i won’t let you down.

We will miss you,  Chandler!

‘The Walking Dead’: The Best Tweets From “Honor”

Carl’s Most Heartbreaking Goodbyes on ‘The Walking Dead’