Walking Dead fans, The time has come to face facts. With Andrew Lincoln leaving the show midway through season 9, The Walking Dead is losing its leader, and our last connection to the original group, Rick Grimes. With the upcoming season quickly approaching, most viewers have started to wonder who will be the new leader of our fearless group. While many options, only a few characters appear to be a reasonable choice to replace Rick.

While the Negan viewers have gotten to know over the past two seasons, the Negan of the future would make a magnificent leader. Rick saved Negan for a reason. A Negan with empathy is one I would love to see. This could lend itself to flashbacks and his reasoning of becoming a better person to Lucille instead of her merely becoming a barb wired baseball bat. With some tweaking, Negan’s leadership skills could be the best thing to happen to our group since meeting Rick.

In the current climate of the show, if Rick could assign anyone to take his place he would pick Michonne. She is a solid choice. Michonne is the only character introduced to viewers brave enough to make walkers her pets! She knows Rick’s ideals more so than any other character on the show now. She believes the future that Carl imagined and would continue marching forward with those ideals to make Carl’s dreams come true. 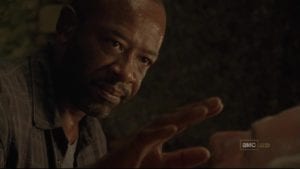 With Morgan’s desire to make his way back to Virginia, a perfect setup for his return would be to take Rick’s place as a leader. By maintaining peace, but knowing when to fight, Morgan has the potential to be the perfect leader. After all, Morgan has already discovers his destiny to be around others even in the most dire situations. Morgan’s arrival, along with additional Fear The Walking Dead characters, lends itself to further crossovers within The Walking Dead universe ultimately.  Plus the idea of Eugene talking to Al makes me deliriously happy for some reason.

Maggie is already a leader in her own right. She has taken over The Hilltop and I have faith she does not have to turn into The Governor. Despite the implications of last season, Maggie is not meant for a villainous role. However, this may be a season where Maggie must learn to see the light. Between Baby Hershel and the words of both Hershel and Glenn, Maggie will remember what is truly important. She will lose her desire for revenge and learn to lead the group the way her father would have wanted. A co-existence will create the most sustainable and best defense among others the show has ever seen.

Despite Carol leaving the group because she did not like the person the apocalypse made her, Carol is more than capable of leading. Since becoming a part of The Kingdom, Carol has come into her own now more than ever. She knows that she does not have to lose herself to fulfill her duty of protecting others. Carol has learned that what will be will be. She only knows of numerous people who care about her well-being. Protection of her mind and body are guaranteed. By listening to hose around her, she would become a leader that lead a true democracy.

Who do you feel should be the leader of the group? Who do you think would be a horrible leader? Please let us know in the comments below.