To say Bernadette is over this pregnancy is an understatement. She even tells Howard that sex induces labor just so she can give birth on her due date and not a second later.

The doctor says it could be another week or two… 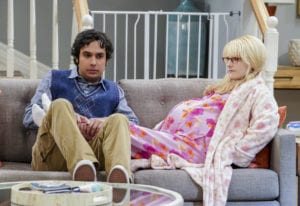 Sheldon even offers to keep her company by playing a board game. It’s very complex and could take weeks to complete. It’s called “Campaign for North Africa”

While working, Amy let’s slip that Bernadette picked the name “Michael” for their son. He confronts her and confesses that he doesn’t want to name their son after Bernie’s dad. He wants them to agree on the name, so they go back and forth with some names.

Bernie has a contraction and Howard takes her to the hospital. The gang stays behind to watch Halley. Sheldon is still playing the game. 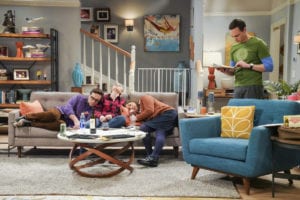 Bernie had her baby and they named him Neil Michael.

We’re back! I am so glad that Bernadette is back. We didn’t get to see a whole lot of this pregnancy like we did with Halley’s but all the same, the episode was great. Seeing Howard and Bernie fight over the name and friends coming to help out was nice and keeps the story real. Plus it was nice to hear that Leonard and Sheldon want kids. Plus the surrogate bit was unique and funny. Unfortunately, the ending was a little abrupt. See you next week!

Bill Gates to Guest Star on ‘The Big Bang Theory’