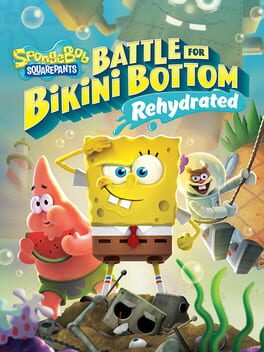 Are ya ready kids? SpongeBob: Battle For Bikini Bottom came to us nearly 20 years ago in 2003. Many remember it fondly, as most licensed games are generally not good. But there is something special about what THQ and Heavy Iron Studios did with this iteration. THQ is again a thing (with Nordic on the end) and thankfully for our sakes, so is SpongeBob. Featuring a fancy “Rehydrated” moniker, is this remaster all we remember it to be?

Now I want to preface that I never did play the original. My PS2 days came well after everyone else’s, and I didn’t have near the ability to up and buy a game as a teenager. But something about that game has always drawn me in. There’s something iconic about SpongeBob in his camo helmet. I will say I have taken the time to look over what the game originally looked like compared to now, and it’s a night and day difference.

While this in itself tells you just how much work Purple Lamp Studios put into Rehydrated, it doesn’t come close to telling the whole story. This game, while still somewhat dated in terms of what today offers with cartoon gaming, is still incredibly remade. The cut scenes show a bit more of the age when you watch how stiff the character models move, but the game is a sight to behold.

The areas are lush with foliage and characters, at least the ones you are in. Once you get to the edge of play you see quickly that that section isn’t important to “fill in”. But this isn’t Breath Of The Wild, it’s a remake of a SpongeBob game, so it doesn’t matter. Objects aren’t fuzzy, but crisp, words aren’t crudely written on, they pop as if a part of what they’re on. You immediately recognize this when looking at the original Chum Bucket versus the new one. The new feels fresh, with the old paling in comparison. That’s one of the reasons this game deserves praise, the world truly feels rebuilt. 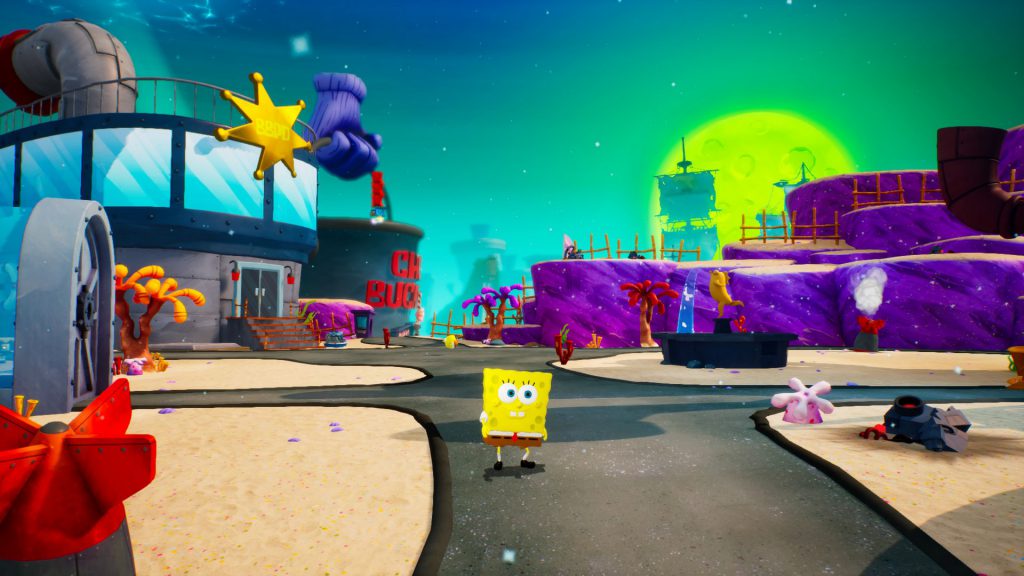 As the story goes, Plankton (of course) has yet another plan to steal the Krabby Patty formula. He’s back to robots, but this time forgets to hit his obey switch. This leads to the robots taking over Bikini Bottom, and that’s where SpongeBob comes in. While I have no idea why they’re important, you must collect Golden Spatulas in order to unlock new areas. This in turn will lead you to the source of the invasion (even though we know it’s Plankton already). The story isn’t a great one, but it provides tons of funny moments as you play along. 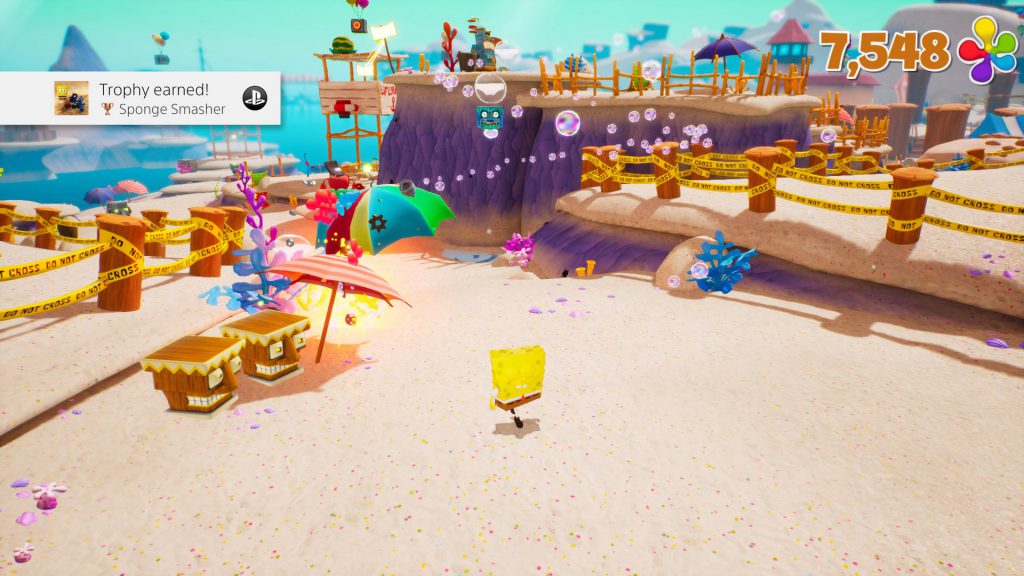 Much of the game is drawn right from the cartoon. You start in a hub area that includes SpongeBob’s home, Patrick’s rock, and Squidward’s iconic Easter Island head. To progress into different levels and further into the hub, you have to jump into classic area like Goo Lagoon and Jellyfish fields. There are even some random ones you might not look for, like Rock Bottom. Purple Lamp brings each spot to life, like taking a step under the sea.

My favorite area comes towards the end of the game. It’s almost like they intentionally save the best for last, with the Krusty Krab even being part of the final hub. The Graveyard section with Davy Jones is the last place chronologically, with you needing the most Golden Spatulas in order to progress. Davy Jones is hilarious as always, and in this level lies a bunch of fun platforming that ends with you fighting the old ghost. He’s a bit of a trickster you see. This game reminds me of how much I miss boss fights. 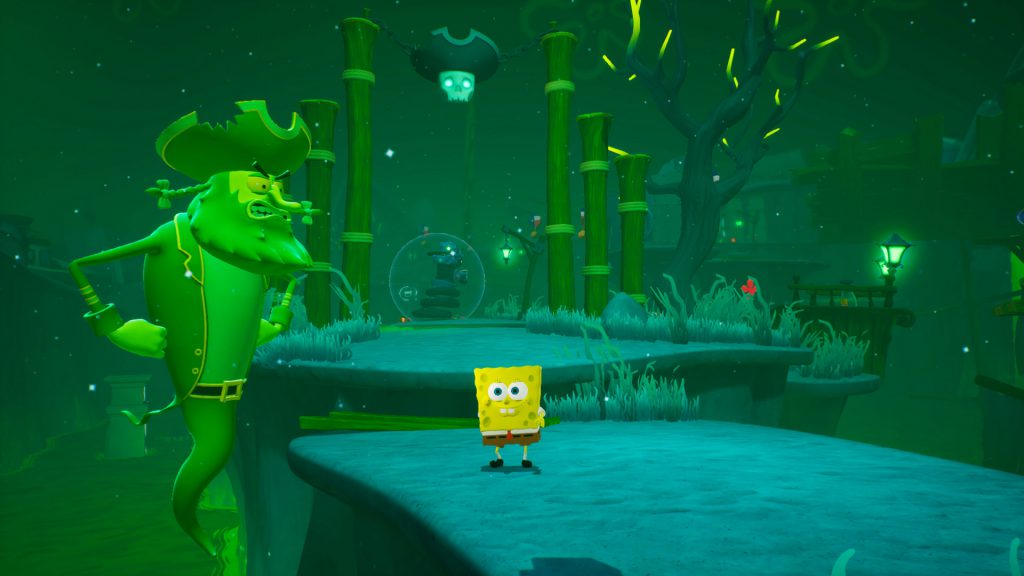 If you’re looking for something the kids can reasonably play, this game is right on the line. On one hand, it’s perfectly clean with as much objectionable content as an episode of the show has. On the other, some of the platforming elements and puzzles can be tough. Most things are optional, but having to have so many spatulas to progress does leave you having to choose which ones to grab. The Kelp Forest is especially annoying, with plenty of swampy areas to fall into and cause a restart. This falls right between a Lego game and a Little Big Planet one for me. Hard enough to probably hold back from the extremely young, but not too tough for the 7-8 year old.

This doesn’t mean the gameplay of SpongeBob: Battle For Bikini Bottom Rehydrated isn’t fun, it’s quite the opposite.

Running and jumping and beating up robots is among the highlights of my week. While the platforming is mostly simple, there is enough to it for even the most expert Mario players to enjoy themselves. The puzzles can be challenging at times, but sometimes that’s even due to old design rather than intentional trickery. I blame a lot of my frustrations on old design, like when I get knocked off a ledge when hit by a projectile with no way to rebound. At least the save and checkpoint system is decently forgiving, although the levels aren’t so large as to cause many problems.

Speaking of design, one thing that is troubling is the loading screens. I understand game making is challenging, when I can get up and get a drink while my PS4 Pro is loading, something needs to be optimized. It’s a little quirk, but a noticeable one. 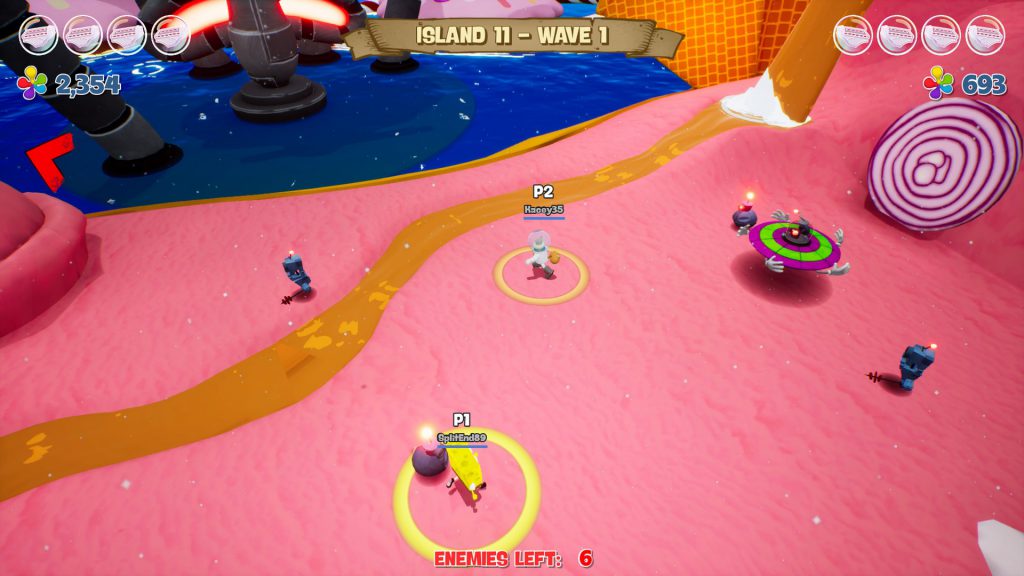 I also don’t understand the need for a co-op multiplayer after playing it. When THQ Nordic announced this new feature, I was thrilled. But upon playing it, it feels like an afterthought. You spawn in, Robo-Squidward throws a few robots at you, you platform over to the next island area and fight the next wave. To me there is a need for a story element in it to really spice up the gameplay and make you forget how repetitive it is. There are even sound effects that seem to be missing. I just wish more would have been done with this new mode.

So what’s the verdict?

All in all, I had an absolute blast with SpongeBob: Battle For Bikini Bottom Rehydated. Is it a Game Of The Year Contender? No. Most $30 remakes aren’t. But it takes an existing product loved by many and rehydrates it with life. Bikini Bottom is a place I think plenty of people want to visit, and this gives you your best shot at that. THQ Nordic and Purple Lamp have done a fantastic job, and even Mister Krabs would tell you the game is worth every penny. SpongeBob: Battle For Bikini Bottom has truly been Rehydrated. 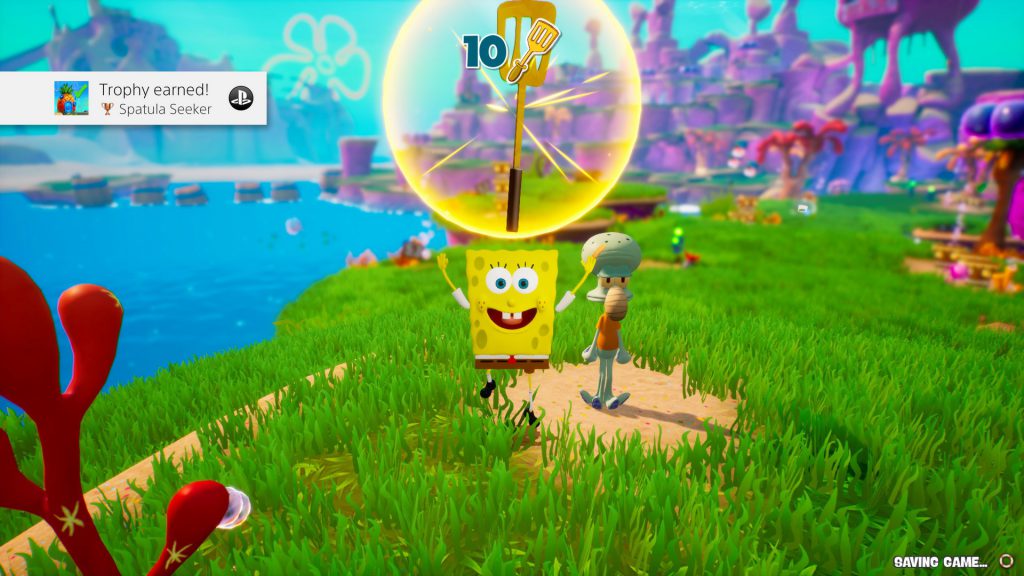 SpongeBob: Battle For Bikini Bottom Rehydrated is available now for PlayStation 4, Xbox One, Nintendo Switch, and PC. Thanks again to our partners at THQ Nordic and Terminals for providing a review code!