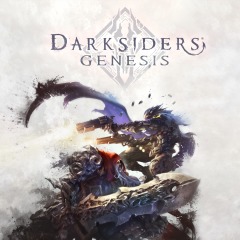 I fondly remember playing the original Darksiders for the first time. The Legend Of Zelda-style dungeon crawling. The God Of War action. I’m really happy both of these are available on next-gen consoles. Even happier still that a Darksiders III happened. But when the details for Darksiders Genesis hit, I wasn’t sure what to think. Sure, it’s new Darksiders, but how will it work changing genres? While the game stays in the general area, a top-down RPG is quite a departure from the gameplay of the first three.

Is it possible for a game to spin-off successfully?

Many have tried, and quite a few have failed (looking at you Resident Evil Operation Racoon City). But for every one like that we have a Cadence Of Hyrule. It comes down to the development behind it, and I’m pleased to say THQ Nordic and Airship Syndicate put time and effort into doing this the right way.

So the game starts as a prequel to the entire Darksiders series. You can say the game features Strife, but only due to his being the first character to show on screen. War shares just as much of the game as Strife, even if it wasn’t advertised as such. The balance of order has been threatened by Lucifer, and that old devil wants to meddle. War and Strife are sent by the Council, the group meant to maintain the balance, to figure out what’s going on.

The story takes about 10 hours to complete. If you’re seeking after a rich narrative that truly enriches the Darksiders story, you’ve probably gone to the wrong place. That isn’t necessarily a detractor to it however, as I love the comic book style in which each scene is presented. There’s enough of an interesting story to keep you invested, filled with betrayal and back-stabbing. In the end, the story isn’t the most important part of Darksiders Genesis, the gameplay is. 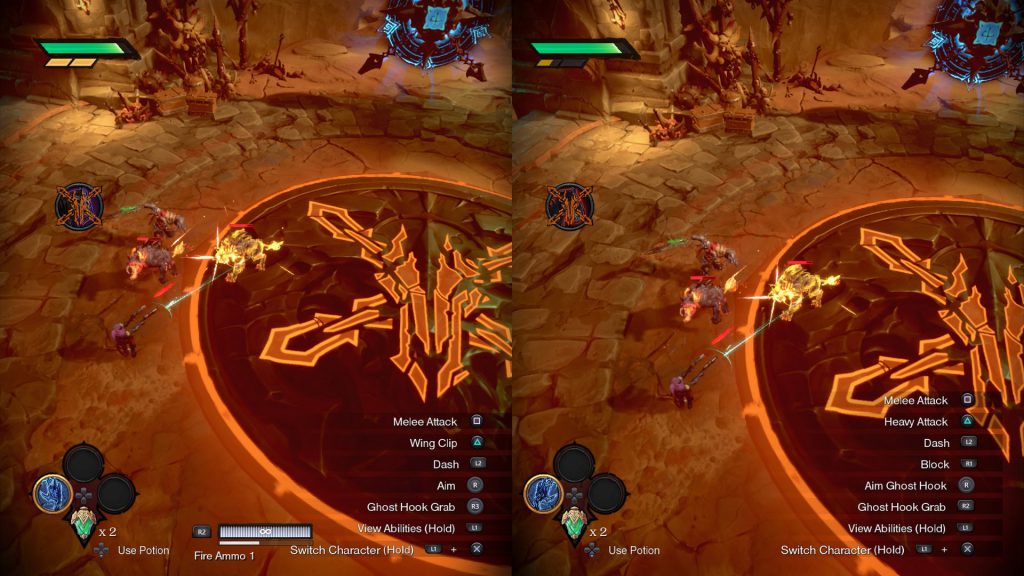 Each level of Darksiders Genesis plays like a top-down RPG style.

Darksiders Genesis takes what you know about Diablo and simplifies it. And by that, pretty significantly at the beginning. I don’t know how you make a game like Diablo without a gear system, but they did. At first things seem slow as you adjust your expectations, but in the end everything works together.

If you want to play a more off style and fight from afar, choose Strife. He is my personal favorite. The ability to sit back and shoot at your enemies is helpful if you’re new to this kind of game. The shooting is done like a twin stick shooter, aiming with your right stick to choose your direction. From there once you shoot enough bad guys, you can enter a “charged” state where you fire rate increases as well as your damage.

War is your brute force character, just like he is in the original Darksiders. Just take your big sword and start swinging to create havoc. You’re going to use him a lot up close but I’ll admit, he was always my second choice when I played the game solo. There’s always going to be a benefit in being able to cause damage without being hit. War could benefit with a health boost or damage taken buff to even him out with his brother, even with him already having it to a degree.

This is one of the strengths of the game, character diversity. 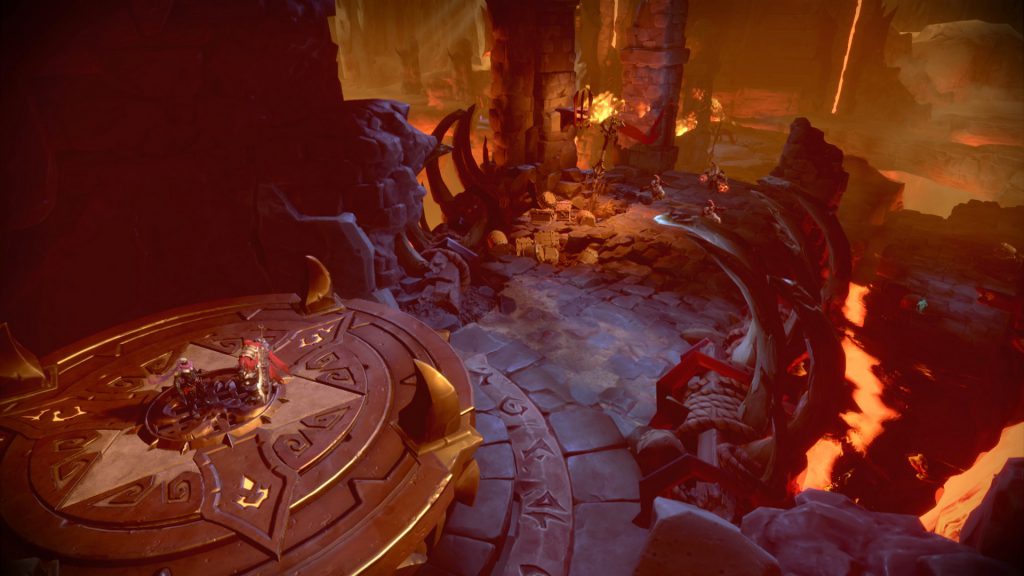 While I may not use War as much, both characters follow a completely different play style. This comes in handy when you and the person with you play two different ways. Strife plays with more precision, where War is more player friendly. My wife assisted me in playing Darksiders Genesis to review the co-op element, and War was much easier for her to handle.

The two also have a wide range of abilities. Ghost Hook is available, which you can use to grab at items and use hooks to get to harder to reach areas. Strife acquires Void Bomb and Ember Spark, and War also has Vorpal Blade and Tremor Gauntlet to use. My experience with both found they are better used with puzzles than combat.

There’s also a wrath meter, which allows you to use one of several equipped “super moves”. These you can purchase as time goes on. Besides these you also gain an “ultimate/rage” form once you pass a point in the story. As with most, You earn this form through combat and building a meter. I definitely utilized this when fighting bosses, its over-powered. 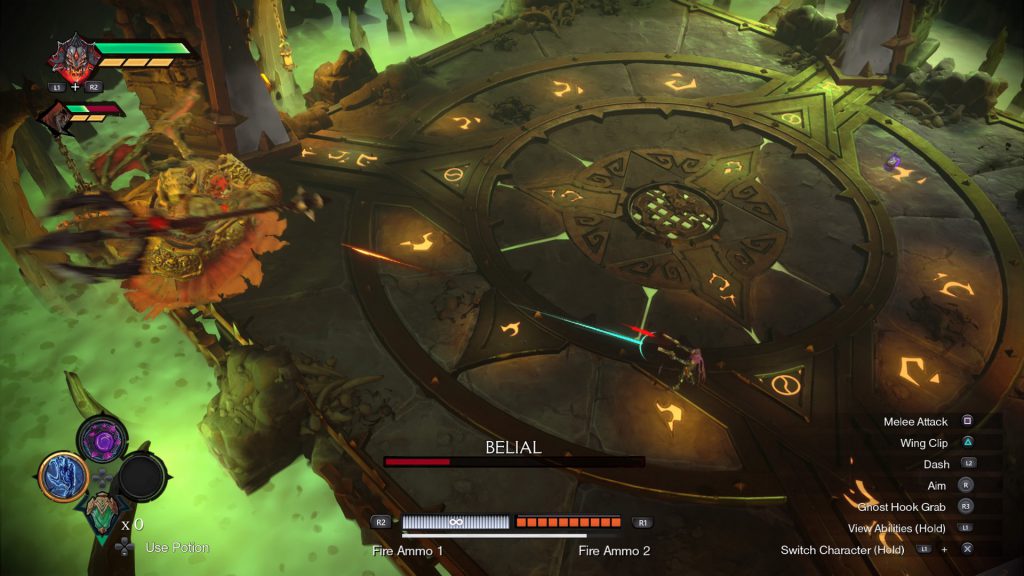 And really that brings you to what this is all about, destroying some bad guys. It’s an absolute blast to do. Strife shooting from the outside, War smashing faces inside. It works so cleanly. Co-op is where it’s the most fun, as you can work together with these two different horseman. But it’s not too bad when you switch between them in single player.

If you’re a co-op player, I highly suggest to give the game a try. My wife and I had a lot of fun fighting uglies and solving puzzles together. The co-op element is very strong, and carries this game into the ranks of Diablo and Borderlands. I just wish it was up to four player co-op.

Now this is where Darksiders Genesis sets itself apart from Diablo.

Each level would be largely the same, if not for the addition of puzzles and platforming. I love the challenge of blasting through a ton of little grunts to find I have to use Strife’s Void Bomb with War’s Tremor Gauntlet to jump a chasm. It feels unique, and it’s fantastic when you’re put into these situations. I wish this could’ve been applied to the bosses somehow.

Speaking of bosses, they’re standard, but they are fun. You have end level demon bosses, and you also have main character bosses. While the end level bosses can repeat and end up pretty standard bullet sponges, main character bosses are awesome. My favorite design has to be Dagon. As irritating as the fight is, the water ledge fight sticks with me. You truly have to Dark Souls them, as in die and try to figure out why you did. Bosses in Darksiders Genesis are well crafted and a big win for Airship Syndicate. 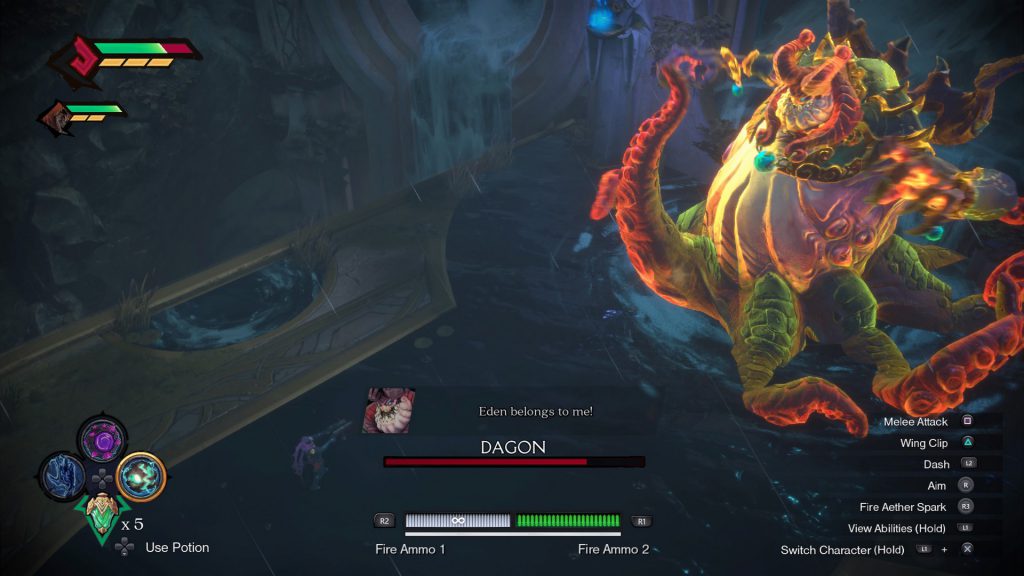 Where the gameplay really expands beyond gear is the unlock and core systems. You acquire souls as you kill enemies and open chests, as well as find boatman’s coins. Both of these are used for currency to buy upgrades from two different demon’s shops. With Vulgrim (who is also in the original Darksiders), you get access to health and wrath upgrade pieces, different ammo types for Strife, and much more. Dis (your second shopkeeper demon) has access to new moves for both characters, which can come in handy upgrading damage as well as adding new combos.

You start collecting these right at the start of the game without knowing what they are. These “medallions” each have modifiers which can benefit your health, wrath, damage, and other random things. One I equipped allowed Strife when strafing a chance to leave a lava path behind to damage enemies. These can be constantly switched out, so don’t think you’re at all stuck. They also add replayability to the game as I didn’t even utilize the entire bracket by the end of Darksiders Genesis. 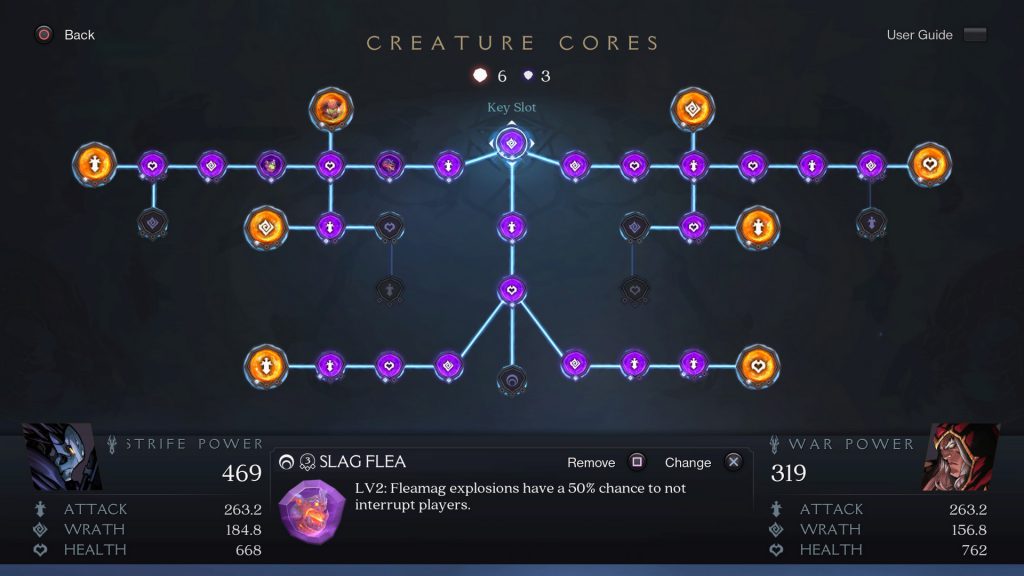 All in all, the worry I had initially of a dumbed down Diablo subsided as each of these new systems appeared. Is it as deep and intricate as Diablo? No. But it approaches itself in a different manner rather than killing the experience. There is plenty to do when you play Darksiders Genesis.

I did encounter a few technical issues when playing the game. There were several moments where the gameplay stutters, and I had three full game crashes at the end of levels when loading back into the main hub. I can say thankfully none of my data was lost. There is also the fun of ledges. In a top down RPG it sucks pretty badly when you battle into a corner and can’t see yourself or the enemy due to a cliff that is hanging in the way. If I run into it often, its an issue, and I ran into this situation far too often. 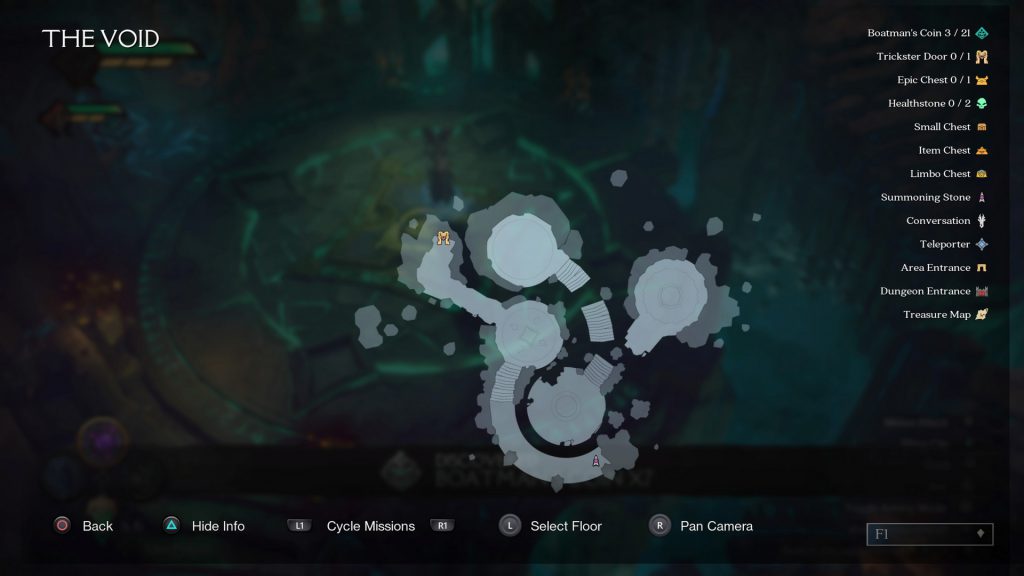 One thing I can also do without is the cave audio. In the hub area of the game if you initiate any conversation it sounds as if you’re really in a cave with horrendous reverb. I get realism, but my goodness it gets annoying. There’s just no point to it. Lastly, let’s talk about the map system. It might as well not be there. They are as basic as it comes, and with no indicator showing where you are on the map, you never really know where you are unless you’re by a landmark.

In the end, Darksiders Genesis is a nice little package. It may not please people who want Darksider’s IV, but it will for those who want a good, replayable hack and slash adventure. There aren’t enough fun co-op games on next-gen, and this fits itself into a perfect niche. It even has everything the Diablo player would want sans the gear. For only $39.99 I don’t see why anyone wouldn’t take a chance on Darksiders Genesis.

Darksiders Genesis is available now for PlayStation 4, Xbox One, Nintendo Switch, PC, and Google Stadia. Thanks again to our partners at THQ Nordic for providing a review code!