At the conclusion of tonight’s Royal Rumble, which featured the first ever women’s Royal Rumble came a bombshell announcement:Ronda Rousey has come to terms on a full time WWE contract. Following Asuka’s victory in the 30 woman Royal Rumble match,  she had to decide which women’s title she would challenge for:RAW or Smackdown. Before she could decide though,  Rousey made her debut to a roaring ovation, shocking the live crowd in Philly. 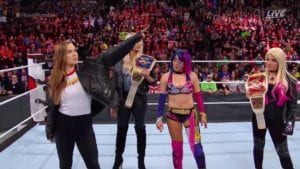 “This is my life now. First priority on my timeline for the next several years. This is not a smash-and-grab; this is not a publicity stunt. When I first met with Triple H, I told him, ‘There are other things I can do with my time that’ll make way more money, but I won’t enjoy nearly as much.'”

Rousey, who is a lifelong wrestling fan (and whose nickname Rowdy was bestowed upon her by WWE Hall of Famer Rowdy Roddy Piper), was previously seen dominating the UFC women’s division and had been seen on WWE at its’ flagship event,Wrestlemania.  What’s Ronda’s next move in the WWE? The world’s eyes will be watching RAW and Smackdown this week in the hopes to find out! Like chatting wrestling? Tweet me @cjcnov88 and tell me what you think Ronda’s first move will be!