Share
Pin
Tweet
Following four seasons and a movie special, Prison Break ended back in 2009. For a long time, for this and many other shows that would be the end of it. However, in this day and age where whole series of television shows
are available at your fingertips and the interest from fans to bring old shows back continues to thrive(24, Twin Peaks, X-Files, etc.),shows like Prison Break are now getting a second chance at life.
Following the original series,  everyone had the same question on their mind once the revival was announced: “How can they continue without Michael?” As you’ve seen in the previews, it’s obvious they haven’t(Unless they are planning some sort of Sixth Sense twist, where Michael is a ghost). So how exactly did he survive? Let’s see if we get any answers from my review of the Season Premiere “Ogygia”, premiering tonight on Fox!
Beware some MILD SPOILERS
The episode starts with just enough backstory to catch you up on the basic plot of the original series. By basic plot, I mean Season 1 and the end of Season 4. With that we re-enter the world of Prison Break and catch up with the characters that honestly need no introduction, but I will introduce anyway. Theodore “T-Bag” Bagwell, everyone’s favorite murderer, is getting out of Fox River the legal way this time. Upon receipt of his belongings, he receives a letter thats contents are most interesting. With letter in hand he finds Lincoln Burrows, who is on the run from people he owes money to. It seems that all that happened in the initial series in no way helped him stay on a straight and narrow path. After a brief tense meeting, Lincoln heads off to find answers and starts in New York, the current residence of Michael’s former lover, Sara Tancredi.  Sara has in most ways moved on, raising Michael’s child with her new husband Gerry. Sarah looks at the information from a logical standpoint, assuming someone is just trying to play a sick joke on them.
Shortly after these meetings however, things start to unfold that point to anything but a joke. If you’re a fan of Prison Break you should know what that entails: car tailing, accidents, and Break-ins from shady characters with silenced guns. Lincoln discovers a clue leading him to believe that Michael may be in Ogygia Prison in Yemen, so  he begins to make plans to go. Sara, having a husband and child now to consider refuses which leads Lincoln to his next choice, C-Note. C-Note has changed quite a bit since the original series, having now become a practitioner of Islam and helping spread awareness and peace. With Yemen a war zone, C-Note reluctantly volunteers to go with Lincoln to ensure his safety. Once they arrive however, things are literally turned upside down, with the ending itself throwing the characters(and viewers) for a loop.
Throughout this episode, I was very pleased with both the writing and portrayals of the characters, give or take a couple of situations. For the positives, Sarah Wayne Callies in particular deserves a special recommendation as she picks back up with Sara as if there wasn’t a 8 year break between portrayals. It’s even more impressive thinking that she was balancing this while also playing Katie in the USA Show, Colony. Dominic Purcell as well, has not lost any of that brash but sympathetic charm that made you feel for Lincoln, and it feels fresh story wise to have him in the Michael type role this go round. One of the only characters so far that haven’t felt authentic to me is T-bag.
Robert Knepper is a talented actor that commands attention when he is on screen, but this version of T-bag to me is not really clicking. Is T-bag putting on a charade, or is he really a changed man? Only time will tell on that one. One of my very few complaints so far on the revival is with the absence of Lincoln’s son, LJ. 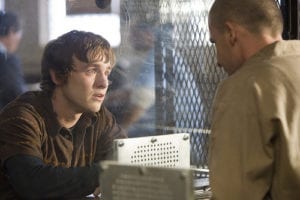 I interviewed the actor who played LJ not too long ago(Marshall Allman) and while he had confirmed to me that he wasn’t involved, I was hoping maybe he just wasn’t allowed to announce until Fox did. While there is a chance that he may pop up in the other 8 episodes, I doubt it due to the fact Lincoln or no other characters that he conversed with in this episode even mentioned him.  That fact alone is even more jarring when you consider when Lincoln meets Sara for the first time that Lincoln hadn’t seen Sara in 7 years, and while they are catching each other up on their lives, LJ isn’t mentioned once by either person. Other than that, this Prison Break fan is extremely excited to see what happens next and I look forward to reviewing it for you guys for the 8 episodes.

If you want to talk Prison Break or anything else you can find me on Twitter @cjcnov88 or you can catch me on the Dave and Creech Show Podcast every week with my cohost Dave Sheridan on Spreaker/Itunes! See you guys next week!