Last chapter revealed that Hiram bought the Sunnyside Trailer Park and the Riverdale Register. What is he planning?

The Lodges invite Archie and Fred over for dinner and Hiram invites Fred to his study to talk. Mayor McCoy is stepping down and he thinks Fred would be an ideal candidate. Fred has dreamed of being mayor since he was little and is considering campaigning. He’ll do it for Riverdale, not Hiram.

Jughead continues to work on his article despite everything going against him. Archie doesn’t want his dad getting into business with the Lodges and consults Jughead’s journalistic abilities to write something to get Fred to change his mind. Archie reveals that Hiram bought Pop’s Diner.

When Pop tells Hiram that Jughead was asking questions, Hiram immediately and rightly thinks Archie did it. Veronica covers for him. Veronica is furious. So is Archie he doesn’t want the Lodges to control his family.

FP reveals to Jughead that Hiram asked him and the Serpents to trash the drive-in so that he can buy it dirt cheap. Luckily, FP is willing to go on record about the job. 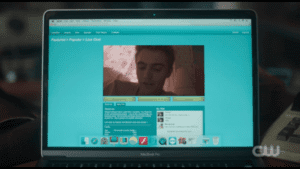 All of a sudden, Hal Cooper wants a divorce. Apparently, he’s the one who sold The Register to Hiram and plans to give half to Alice if she sets him free.

Betty wants Kevin to catfish Chic because he won’t open up and thinks that if Kevin talks to him (via webcam) that she’ll get some answers. They know nothing about him. After a few conversations, Kevin refuses to bait Chic as he seems genuine.

Polly finally brings the twins to visit Alice. She is surprised to see Chic. She doesn’t feel like Chic likes her or the twins. To be fair, he’s getting really creepy and seems to be literally cutting family members out.

Clifford Bloom left a secret will and assets will be divided equally amongst all who share Blossom blood. (Now it’s clear why Hal wanted the divorce) Cheryl, however, is the rightful heir. During the reading, Clifford comes walking through the door? Actually, he’s Clifford’s brother, Claudius and he is up to no good. 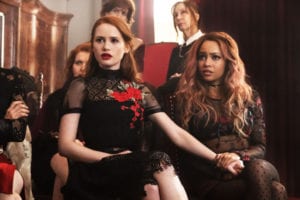 Jughead gets a mysterious phone call about information on Hiram’s plans. Turns out he had done business in FP’s old stomping ground, Shankshaw.

FP and Jughead visit the prison and they find out that Southside High will be turned into a private for-profit prison. Hearing that Jughead is going to print this story, the Lodges decide to come clean to Fred and Archie. Fred does not support this, he backs out. Archie, however, is surprisingly pro-prison. 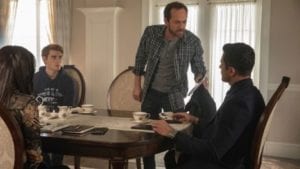 Hermione Lodge decides to run for mayor and wins.

Who is Chic? His blood test came back saying he isn’t who he says he is. And it still isn’t clear why Hiram is planning a huge prison. Why is Veronica blindly following her parents and why does Archie keep flip-flopping? He seems a little wishy-washy when it comes to his loyalty. Also, who is Claudius and why are he and Penelope plotting to get rid of his mother and Cheryl? There is just too much drama for this hour-long episode! Last thought, why didn’t Hermione run for mayor in the first place?

Home » Uncategorized » ‘Riverdale’ Recap “Chapter 28: There Will Be Blood”