The first thing that I noticed this issue was how 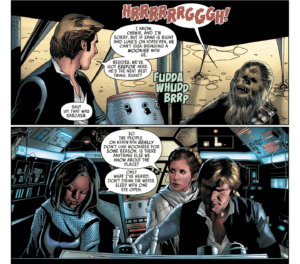 inconsistent the art appeared. Characters go off-model from panel to panel. There are several moments where one panel will look almost over-rendered, dipping into the uncanny valley and clashing with the panels around it. Too often the artists attempt to make the character’s faces photo-realistic, which has the side effect of making their expressions stiff and uninteresting. While this works better for the many aliens that dot the issue, the human characters are not so lucky. Especially our original trilogy trio.

Looking beyond that, however, and the Screaming Citadel crossover continues to be an interesting arc. Sana, Leia and Han are on their way to try and rescue Luke from Aphra, assuming he’s been kidnapped. It also looks like we’ll be getting more information on Sana and Aphra’s history together, once the two finally meet again.

Sana already knows a little about the Screaming Citadel, like her advice to “never trust the Queen.” I buy that. Then again, I’m not sure who I would trust less: the Queen, or the rogue archaeologist. Although… if the Queen has such an enormous collection of creatures, I find it a bit hard to believe she has never seen a Jedi, unless she really is as young as she appears (not likely). We don’t learn much about her life-sucking powers here, but I’d assume they are Force-based in some way. Perhaps she is related to the nightsisters of Dathomir? Both she and the
nightsisters do have an affinity for red, and Force-based magic. 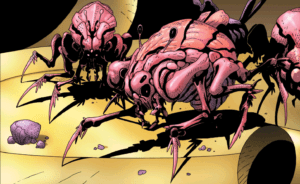 If you’ve read the first issue of Aphra, you might have recognized the containers on the main cover. They belong to abersyn symbiotes, which featured in the epilogue of Aphra #1 and are heavily tied to the good doctor’s past. The symbiotes do factor into the plot of the issue, and will likely have major consequences in the coming issues. Although Han, Luke and Leia will all come out of this arc unscathed (that’s the nature of interquels, of course) and I imagine Aphra will continue on in her solo comic, Sana and Aphra’s crew may be in for some trouble.

Although we don’t get a lot of answers, speculation is part of the fun when it comes to Star Wars, at least to me. How every story adds to the greater universe is my favorite part. There are still three issues left, but things are moving fast.