Readers would benefit from having kept up with Star Wars, Darth Vader, and Dr. Aphra, as it makes references to several developments from each series. However, this review will contain spoilers.

When I said that Aphra can’t help but get mixed up with the Skywalkers and their problems, I was wrong. She can totally help it. I went into Screaming Citadel wondering what might bring Luke and Aphra together, when I should have guessed it was all going to be her fault to begin with. Aphra has plans for the crystal she swiped from the Ordu Aspectu, and that brings her to tracking down Luke. She offers him a trade: help her reactivate Rur’s consciousness, and he receives training from an ancient master. 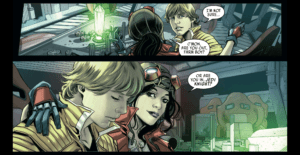 Aphra easily steals the show as she shuffles Luke out of the bar and onto her ship, recounting the evidence she has that points to him being a Jedi while he can do little but agree to her terms. This is a Luke Skywalker before meeting Yoda, still naïve to so many things about the galaxy. This is shown not only in Kieron Gillen’s script, but in the pair’s body language. Luke is often drawn with his shoulders curled in, his face down, while Aphra throws her weight around with a confident smile.

Although Luke does look great in that suit.

Luke and Aphra need help from the Queen of the eponymous “Screaming Citadel” – an apt name, once the Queen’s true nature is revealed at the end of the issue. There is a distinctly Red Queen/Through the Looking Glass vibe to her castle, guards, and overall design. Readers are not told much about her apart from the fact that she only has an audience one night a year, and grants a “request” to anyone who peaks her interest. Aphra’s request is going to be reactivating Rur’s crystal, or at least that’s what Aphra says she is after. I’d be more surprised if there wasn’t a double cross in this arc’s future.

Although the archaeologist and budding Jedi are the focus of the issue, it’s unlikely they’ll be facing the threat of the Screaming Citadel all on their own. Leia, Han and Sana look like they are on their way to help. All five of them together will definitely make for an interesting dynamic….

Like the main Star Wars comic, this issue is absolutely stunning. Marco Checchetto and Andres Mossa pair perfectly on art and colors, and as mentioned above: Checchetto is great at bringing the characters to life through their movements and expressions.

This is a great setup for the crossover to come, and I cannot wait to see what mess poor Luke has gotten himself into.