I didn’t think it was possible, but I think Aphra got upstaged! In her own comic! The “Screaming Citadel” continues as Aphra and Luke meet up with Han, Leia and Sana, with Triple-Zero and Beetee in tow. For an issue of Dr. Aphra, Aphra was not her usual, bombastic, attention-grabbing self. That clearly has to do with the presence of Sana. The moment the two lay eyes on each other, Sana tries to shoot her! If it wasn’t for Luke, Dr. Aphra would have met a very unexpected conclusion.

This less than touching reunion shakes the archaeologist up a bit. The art alone makes Aphra’s feelings for Sana very clear. She also seems taken aback when Luke calls her a friend. Perhaps Luke’s sincerity and compassion is rubbing off on her? 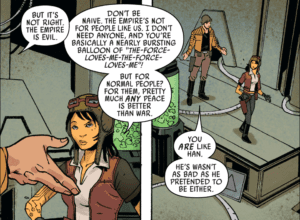 I still love the fresh perspective that Aphra brings to Star Wars, and to Luke. When he asks why she is okay with the Empire, she gives a reason I would have never thought of. For some people, any kind of peace is better than war. A simple statement like that really helps this universe feel more alive. Not everyone in Star Wars is out to save the galaxy. Some of them, like Aphra, just want to survive.

But as I said above, I didn’t think Aphra was the most interesting character in this issue. Thanks to a very observant and psychotic Triple-Zero, it was Leia who grabbed my attention in the end. As soon as she steps off the ship, Leia is barking orders. She chastises Luke for being a poor soldier, insists that Sana not shoot Aphra (yet), and tries to keep Han from being too impulsive. She is always taking charge.

When Luke is talking to Aphra, he compares her to Han, saying, “he wasn’t as bad as he pretended to be either.” When Sana is insisting that she and Leia leave the others behind to escape, Leia’s words are just the opposite. “You’re all as bad as each other.” At this point in her life, she just doesn’t see the best in people the way Luke does. Instead, as Triple-Zero points out, she sees them more like tools for her missions.

Triple-Zero’s observation appears to fill Leia with shame, but she can’t really deny it. Pairing these two characters together was a brilliant move that I hope continues into the next issue. Seeing how Triple-Zero treats Black Krrsantan and his own master should certainly be eye opening for Leia.

The Queen of the Screaming Citadel makes a brief appearance, trapping Luke and Han with her mysterious power. We do learn a little more about the plot—more about the Queen’s powers, and the way the symbiotes work—but most of it is just setup for the next part of the crossover. Still, the character focus of this issue made it worthwhile.