Spoilers ahead for Hulk #8.

So, I think this might be the first issue of Hulk that I didn’t completely love. It was a combination of two things: an inconsistent art style and taking the focus off Jen’s inner voice until the end of the issue. Regarding the art, there were times when everything looked great and flowed well, but some panels looked more like stiff, posed models than actual characters. 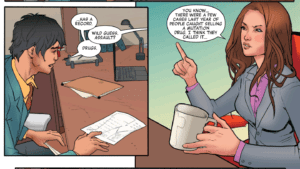 One thing this issue does have that I liked a lot was more time with Jen’s dorky assistant, Bradley, who really gets into the “CSI realness” of the whole thing. When Bradley showed up in past issues, he always seemed ready and willing to help Jen with whatever she needed. Here, he’s even more eager to help because he has a small crush on the poor baker who was turned into a—pardon the phrasing—hulking green monstrosity. After Oliver’s boyfriend whisks him away to a hotel and out of the spotlight, Jen and Bradley set off to track him down and figure out what happened. 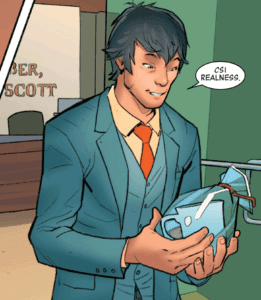 The rest of the issue is straight forward. Jen tracks down clues and Oliver escapes. He attacks Steve and Ray and then goes after the sellers of the “monster juice” that mutated him. The readers aren’t shown what Oliver does to the sellers, but it’s all probably best left to the imagination. Again, apart from some cute moments between Bradley and Jen, I didn’t find myself as engaged as earlier issues. I also didn’t understand why Jen felt the need to go up to the roof and jump off to transform into Hulk.

When Jen does give the readers her inner thoughts—about her motivation, about the dulled reaction people have to catastrophe—the issue is more interesting. The rest just feels like filler. Moving the focus off Jen and onto four characters we know nothing about and will probably not see again after this arc, feels disingenuous. I would have preferred things remain fixed on Jen’s point of view.

Although I was a bit let down, I am incredibly excited about the next issue based on the cover! It certainly looks like there’s going to be another appearance from Patsy!