Spoilers ahead for Hulk #8

If you’re reading Hulk and were also a fan of the recently concluded Patsy Walker comic, I’ve got some good news: it’s Patsy! Yes, Hellcat returns to visit her friend in this issue and it’s great to see the best friends together again. Now that Jen is the one with her own series, I hope Patsy serves a similar purpose and shows up just as often. 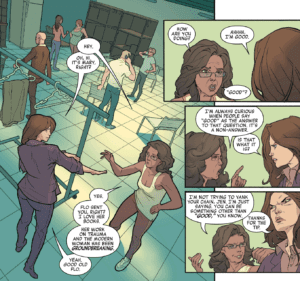 After the massive step forward last issue, with Jen finally transforming into a grayer, more feral Hulk form, this issue tries to establish the new status quo. Though I do want to point out that it is a valid therapy that works for many people, I understand Jen’s cynicism when it comes to group therapy. When you don’t want to be there, it can be hard to put aside those preconceived notions. Even though Jen made a huge step in the last issue, she still has a long way to go. So, maybe group therapy isn’t for her? Maybe what she needs instead is a friend to talk to and some demolition.

Is that the healthiest option? The hulking out and smashing things is debatable, but who am I to judge? Jen remains relatively in control of her Hulk form, but insists that she doesn’t feel like herself when she’s in it. So I’m looking forward to the book exploring what that actually means.

Since this issue is just setting up for the new arc, there isn’t a lot of action unless you count the aforementioned smashing. The rest is divided between Jen discussing her situation with Patsy, and a pair of cameramen clearly making terrible life choices. The cameramen work for a cooking web-show that Jen happens to watch, and stupidly decide to pull a prank on the talent. After sprinkling some green powder on the host’s food, they sit back and watch what they assume is going to be a hilarious meltdown.

There’s certainly a meltdown, but it’s more of the big, green and hulking variety…. I’m curious if this is going to tie into the upcoming Weapon-H storyline? It might be too soon, but I’d like to see Hulk begin to crossover more with the greater Marvel Universe. Patsy is great (really, she’s perfect) but it’d be interesting to see Amadeus make an appearance.

Even though it’s a bit of a contrived coincidence that Jen would be watching this web show at this exact time, I like that we’ve kept the thread of her watching cooking shows to try and relax. Wait… that’s probably ruined now, isn’t it?