Spoilers ahead for Hulk #6.

So far, Hulk has been light on action as it examines post-traumatic stress.

It has been a great look at the changes Jen has gone through after Civil War. But until now, apart from glimpses on the covers and flashbacks, we haven’t seen an appearance from her Hulk side. She has been doing her best to keep that part of her suppressed. It’s made sense, of course, and is a great way to use the Hulk’s power as a metaphor for mental illness, but we all knew it wouldn’t last. It was always going to end this way, but just because the Hulk’s reemergence was expected, doesn’t mean it wasn’t worth it.

Mariko Tamaki has been making great use of flashbacks to the time before Civil War II, highlighting just how much Bruce means to his cousin. This flashback is only two pages, but it says so much about their relationship. Jen always worried about Bruce, but never really thought she would actually lose him. In doing so, she is being forced to live out one of her greatest fears.

And that’s what this has all been about: fear. Maise is so afraid of being hurt again that she has created an enormous rage monster of her own to protect her and the others in her building. It represents her fear of being hurt again. But as I said, Jen has already suffered her greatest fear. While it was obvious that the Hulk would emerge, what took me by surprise was how Jen remained in control. It proves how strong she is—that she is a survivor. The Hulk is a dangerous monster filled with fear and rage, but that fear—and the experience that comes with it—can be used to help others.

Jen’s new Hulk form is so different from She-Hulk. Not only is it gray, it’s much more feral. She is constantly raised up on her toes, hunched forward and ready to pounce. I am curious how much of this is psychological and how much is related to her recovery in the hospital. Her glowing green scars lead me to believe that there’s something else going on that we haven’t been told about yet—perhaps more will be revealed in the next arc. 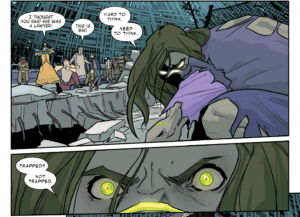 I hope that the team remains the same as we move forward in Jen’s story. Tamaki has taken Jen to a dark place, while still maintaining her sense of humor. I love Nico Leon’s art and Matt Milla’s colors so much, and hope that they stick with Tamaki for a long time. Much like last issue, they got to play with the colors and design of both Jen’s Hulk form and Maise’s creature. The style for this series has proved to work just as well with action as it has with quiet moments. The first arc might be over, but I can’t wait for more to come.