Spoilers ahead for Doctor Aphra #10.

Although the last issue of Doctor Aphra ended with Triple-Zero meeting with Darth Vader, there is no mention of the Sith Lord in #10, which was a bit disappointing. It seems that readers will have to wait a bit longer for that resolution, but it’s obvious from Trip’s actions in this issue that he is no longer on Aphra’s side. Looking back through the series, it’s obvious he never was. The droid only protects and serves Aphra because she allowed him access to interesting carnage. I realize now that I’ve underestimated Trip’s importance in this book. Having a character as rigid and unchanging as a psychotic droid makes Chelli Aphra’s character development more apparent when it does appear.

And it’s in full view during this issue, as Aphra meets with different groups to discuss their bids for the Rur Crystal. Her conversation with each bidder reveals more about her character. Toov, the man who wants to live forever, is a reflection on Aphra’s own desire for money and an easy life. Her meeting with the droid from the Cyban Front also reflects her fear of Rur. But it’s her meeting with the Shadow University that is the most telling. 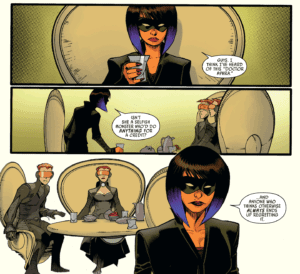 While the University doesn’t offer her as much money, they do give her the opportunity to continue studying Rur for herself. Aphra has developed a strange relationship with Rur, and she is a scholar, so this felt like the best option from a narrative perspective. However, there was a brief moment where I doubted she would make the right choice. Even when she does, it’s not without consequences. 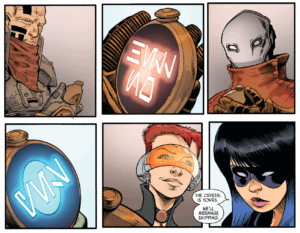 When I assumed that Rur’s containment field would fail, I honestly thought it was going to be because of Aphra’s own error – that the field wasn’t strong enough, or she had made a mistake in constructing it. I did not account for Triple-Zero and Beetee sabotaging her. Now Rur has a body, and the old Jedi is out for blood.

Overall, I thought this issue was slow, but deliberately and to great effect. Aphra has come a long way since the first story arc where she uncovered Rur. Now that her droids have betrayed her in spectacular fashion, it’ll be interesting to see where she goes from here.