It appears Aphra picked up a few tricks from her time in the Screaming Citadel. Her scheme during this issue plays very much like her own version of the Queen’s exclusive balls. Although I was kind of upset she went with a different outfit than the Princess Leia-inspired one on the cover….

While Aphra appeared to have been drifting a bit more towards a change-of-heart during her time with Luke Skywalker, that character development takes a back seat to her big plan. When the Queen woke Rur’s consciousness, she did not give him back his technopathic power. I found it interesting that the first step on Aphra’s agenda was restoring that power. Even without it, the crystal’s knowledge would fetch a hefty price on its own, and she would not have needed to waste time constructing the containment field.

But giving Rur the power to hijack machines does make for a more impressive presentation. 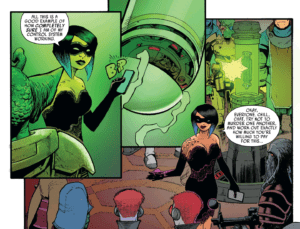 I do wish we had been given a bit more time between Aphra and Rur. Since she’s an archaeologist, it would make sense for her to want to grill the ancient Jedi for more information. But even though “science is always a good idea”, she seems to care about the money far more. Although I’m not quite convinced this is the end of Rur. Although she says she is confident in her containment field working to restrict his psychic powers… I’d be incredibly surprised if that isn’t massive foreshadowing of a catastrophic failure.

Although I said Aphra’s character development takes a back seat, it isn’t entirely absent. It’s clear from her conversation with Triple Zero that their relationship has changed, mostly because Aphra herself has changed. While the art throughout the issue is great, there is one moment that stands out: the expression on Aphra’s face when Triple Zero declares he is getting “bored” is an important one to get right. She isn’t amused by his macabre antics anymore. Instead, she looks concerned. It’s a subtle change but one that might have massive consequences going forward. 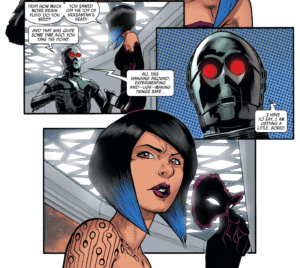 Maybe she really is starting to go soft?

I found the final page of this issue hilarious instead of shocking. The reveal that Triple-Zero wants to betray Aphra to Darth Vader means that Doctor Aphra has once again just traded one Skywalker for another. I wonder if we’re going to be treated to Vader meeting Rur next. His son rejected the old Jedi’s knowledge, but who knows what a Sith Lord might be able to accomplish with that kind of knowledge?