Season 8 of The Walking Dead has been packed with action, drama, and some decent character development (looking at you, Father Gabriel) thus far, but with the midseason finale only a few days and the promise from AMC that there will be a “moment everyone will be talking about” is enough to get fans a little nervous. The warning speaks for itself – someone is probably going to die, maybe more than one. The Walking Dead has never really shied away from killing characters off in their midseason finales, but as of the past few seasons, they’ve tended to save the huge deaths for season finales and premieres.

AMC: Watch live next Sunday to experience the moment that everyone will be talking about when the episode ends!

In order to calm my own nerves about the looming episode and distract my brain from thinking the worst, I decided to take a look back and rank the six midseason finales of Walking Dead‘s past (Season 1 didn’t have one). All six were relatively strong episodes, but some definitely shined more than others. Take a look at the rankings below and let us know how you would rank them in the comments!

Synopsis: With the walls down, Alexandria finds itself swarmed by walkers. Morgan and Carol argue over what to do with the Wolf that Morgan captured during the attack in “JSS”. Carl and Ron come to blows and Alexandria’s leader Deanna gets bit. Meanwhile, Daryl, Abraham, and Sasha come face-to-face with a new enemy.

Biggest Moment: Negan post-credit scene or the group holding hands before venturing out into the walkers.

Ranking: While this episode was a strong contender it felt unfinished. The show’s cliffhanger of Sam yelling “Mom” as the group attempted to escape out of Alexandria in walker guts was enough to keep you guessing for a few weeks, but it was more infuriating than anything. It would have made for a much better penultimate episode to the midseason finale as opposed to a cliffhanger before 6B. The writers tried to distract you from the lazy ending with a post-credit scene that officially introduced us to the Saviors and the name Negan, but ultimately the episode was saved by the escalation of tension between Carl and Ron, Deanna’s death and the Carol vs. Morgan vs. the Wolf drama.

Synopsis: Rick and the group go face-to-face against Dawn and her officers in an attempt to save both Beth and Carol without any more bloodshed. Michonne and Carl reunite with Abraham’s Army who has returned after discovering the truth about Eugene, including Maggie who learns that her sister is still alive after having not seen her since the fall of the prison. 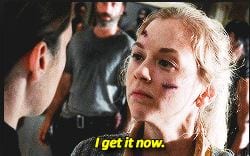 Ranking: While the death of Beth was heartbreaking, it was predictable and I truly believe that a lot of viewers were more relieved to see the Grady Memorial Hospital storyline end than they were sad about Beth. However, it’s hard to look past what the loss of Beth meant for her sister Maggie and for Daryl who had been paired up with her post-prison. In the grand scheme of character deaths though, Beth’s death in “Coda” was probably the last big loss we’ve seen in a midseason finale since. Plus, the final scene of a defeated Rick leading his group out of the hospital followed by Daryl carrying Beth’s body was one of the most impactful and memorable moments of the entire season. Add in the guttural scream that comes from Lauren Cohan and you’ve got yourself a devastating ending no matter how much you saw it coming.

Synopsis: Rick, Daryl, Oscar, and Michonne lead a sneak attack on Woodbury in an attempt to rescue Maggie and Glenn who had been taken be Merle the week before. Michonne finally gets a showdown with the Governor and Daryl is captured and reunited with Merle under some dire circumstances. Meanwhile, a new group of survivors, including Sasha and Tyrese, find their way into the prison. 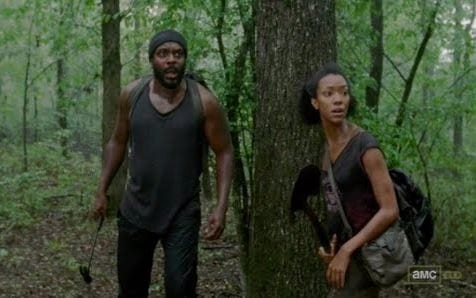 Biggest Moment: It’s a tie between Daryl being captured and forced into The Walking Dead’s version of Celgene-Bowl with Merle or Michonne killing Penny and taking out the Governor’s eye.

Ranking: Even though you may not remember it very well, “Made to Suffer” was actually a really strong and satisfying midseason finale. As opposed using the episode to kill off a main character the writers actually used it to introduce two more. It was the first time we met Sasha and Tyrese and also the first time we got to see Michonne fighting alongside Rick’s people to save Maggie and Glenn. The tension between Michonne and the Governor had been brewing for the entirety of the season’s first half and it was a mighty great payoff to see her stab that piece of glass in his eye. The show’s cliffhanger was decent enough, finally reuniting Merle and Daryl after having been separated since season 1.  That moment, in addition to Andrea’s reaction seeing that Daryl and her old group were the “terrorists”, was definitely enough setup to get you excited for the back half.

Synopsis: Negan makes an unwelcome visit to Alexandria, wreaking havoc on its residents while Aaron and Rick attempt to get supplies for the Savior’s pick up. Daryl attempts to make a daring escape from the Sanctuary and Rosita puts a plan to kill Negan in motion. 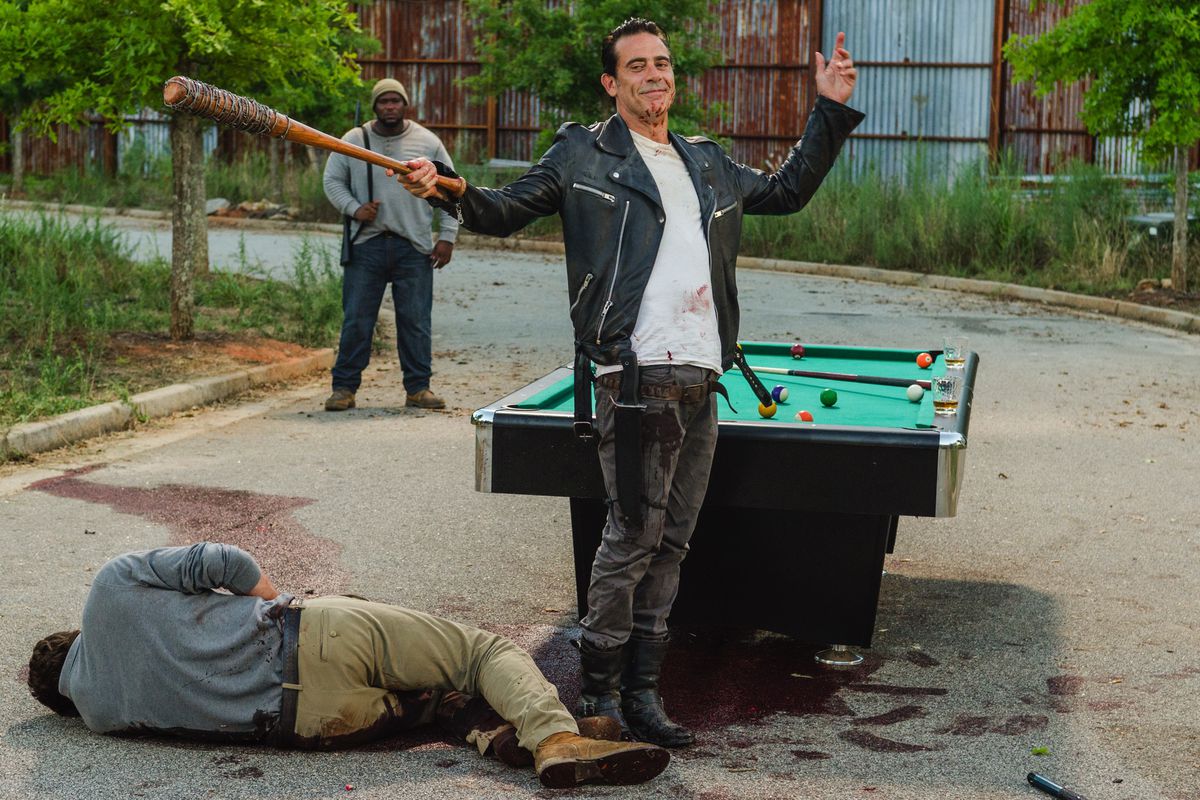 Biggest Moment: Daryl escapes from his captivity at the Sanctuary and meets up with the group at the Hilltop as they all come to the consensus that it’s time to take out the Saviors once and for all.

Ranking: It was difficult to rank this episode because while nothing completely earth-shattering happens, it has a ton of plot. Just some of the main events that happen include Negan gutting Spencer, Rosita trying to kill Negan, and Negan taking Eugene back to the Sanctuary with him. However, despite all of the terrible things that happened to Rick and his people on that day, Daryl is able to escape from the Sanctuary, which was huge. When he meets up with Rick & Co. at the Hilltop we get one of the most touching reunions of the entire series. Not only that, but everyone is on the same page finally and there’s a sense of hope that had been missing since Glenn and Abraham’s death. It’s an episode-stealing scene that secured it the #3 spot.

Synopsis: Glenn decides to tell the rest of the group about the Walkers that Hershel is hiding in the barn, leaving the group torn on what to do. Shane makes the decision for everyone and opens the barn so that the group can kill them all, but in the closing moments, it’s revealed that Carol’s daughter Sophia, who had been missing since the season premiere, had, in fact, died as she appeared as a walker, leaving the group completely in shock and Rick to put her down.

Biggest Moment: Sophia coming out of the barn as a walker.

Ranking: The Sophia reveal was probably biggest surprise and most talked about moment that The Walking Dead had had since it’s series premiere. Having spent so much time searching for Sophia the entire first half of the season, it was was a truly heartbreaking moment to end the first half of the season on. However, many still remember this moment and the ramifications that it had on many characters and plot points for seasons to come. Another shining moment in the episode? Jon Bernthal’s incredible performance throughout both the episode and the entire barn scene. “Pretty Much Dead Already” not only ranks high on my list of midseason finales but also on my list of all of the Walking Dead episodes.

Synopsis: The Governor finally makes his move to take the prison, arriving with an army, a tank and Michonne and Hershel as his two hostages.

Ranking: While it may certainly be challenged by Season 8’s addition, “Too Far Gone” is the best midseason finale of The Walking Dead thus far. While the episode thankfully closed out the Governor’s arc, it was our moral compass Hershel who paid the price as he was executed in front of the entire group. His death was one of the hardest to watch and was truly felt for so many seasons to come. Michonne getting the chance to finally take out the Governor was a satisfying end to her chapter with him as well. In addition, “Too Far Gone” officially marked the welcomed end of the prison where our survivors had called home for a season and a half. As the prison is overrun with Walkers, everyone is separated and unsure of who else made it out alive. This ending paved way for a lot of theories about who would end up paired off and was definitely a brilliant set up with so many potential stories heading into the back half of the season.

‘The Walking Dead’: Did You Catch the Heartbreaking Carol Easter Egg

Which Episode of ‘The Walking Dead’ Do You Think Has the Highest IMDB Ranking?