Jeffrey Dean Morgan, who plays Negan on AMC’s The Walking Dead, has been cast in the motion picture adaptation of the classic Midway arcade game Rampage. Morgan will portray Agent Russell who works for a government agency known as OGA and is in need of an attitude adjustment. The New Line Cinema film will reunite Morgan with his Watchmen co-star, Malin Akerman, who played his daughter in the 2009 film. She is set to play the main Rampage villain.

Both Morgan and Akerman will co-star along with Dwayne Johnson,  Naomie Harris,  Joe Manganiello, Marley Shelton, Jake Lacy, PJ Byrne, Jack Quaid, Matt Gerald and Breanne Hill. Filming is set to begin this month in Atlanta, Ga. Hopefully it won’t conflict with the filming of season 8 of The Walking Dead.  Production of the series usually  begins in early May but there has been no official confirmation about that. 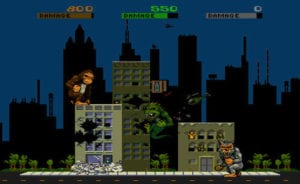 In 1986, Midway released the video game, Rampage, in which, players were able to play as one of three monster characters who were formally human. You had a choice to play either as George, a King Kong type of giant gorilla who is transformed by a experimental pill, Lizzie, a lizard/dinosaur Godzilla type that is transformed by a radioactive lake, or Ralph, a giant werewolf that can be transformed by an additive in food. You advance by destroying the city and fighting the military across the U.S.