It’s been two weeks since we last saw Preacher, unless you tuned in to re-watch the pilot last week, and while I haven’t agreed with AMC’s decision to air the premiere and then take a week off, it hasn’t diminished my excitement for tonight’s episode. I’m very anxious to return to this world where vampires eat cows, women named after flowers can make bazookas out of cans, and where our “hero” is living a lie in his life of faith. There is a dark weirdness to Preacher that I can feel begging me to get addicted to. The world we were introduced to already seems so rich with backstory that I can’t help but be intrigued.

When we last off Jesse found himself in his church, for what he believed was the last time, begging God for some answers. The episode was riddled with flashbacks of his father, a preacher also, who presumably was killed in front of a young Jesse. We know that Jesse’s father made him promise to do something and one can assume that was to follow in his footsteps and become a man of God or at the very least not to be come a bad man. I’m a sucker for flashbacks that open the door of intrigue. Is it possible that Jesse’s father got caught up in some bad stuff that got him killed. Could he be asking Jesse to promise not to turn out like him? Or is it possible that this town just wasn’t a big fan of his gospel and Jesse’s father was asking him to follow in the steps of God? We already know that the preacher holds importance in this town as we saw with Jesse making the rounds last week. Either way it seems that Jesse has broken that promise and has returned home to be a preacher out of guilt and not out of love for God.

While Jesse didn’t get a response from God, or maybe he did depending on your point of view, he was met by our space demon who was exploding all types of people throughout the course of the show. When it met Jesse though the space demon found something it liked. My working theory is that all the preachers it exploded were too pure, and yes this means Tom Cruise as well, and there was a darkness in Jesse that it could feed off of. There is a marriage between the space demon and Jesse that is just starting to be explored as we already know that it has the ability to have people take very literal meanings on words of advice (looking at you man who cut his heart out in front of his mom). 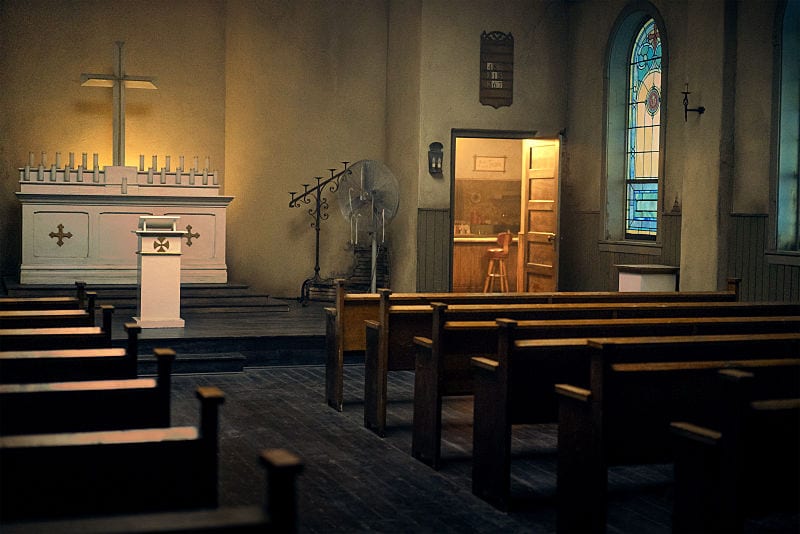 It’s not like Jesse was uninteresting before the space demon but now there seems to be some form of clarity. It’s possible that he believes the space demon is actually God speaking through him but there’s also the possibility that he doesn’t even know it’s there, which I’m finding doubtful. Based off the trailer it seems that Jesse has experienced an awakening, and if his latest gospel was any indication, then the word of God might mean something entirely different to him now.

What does the space demon mean for Jesse’s past though? Tulip, our badass bazooka maker, is back in town wanting Jesse to do one more job with her. Pre-space demon Jesse said no but this Jesse could possibly be persuaded, and it probably won’t help with Tulip becoming a member of the congregation.  Tulip was instantly one of my favorite characters and I’m looking forward to learning more about her. For starters, who were those men she was killing when we first met her. I mean, she bit some dudes ear off. What was that?! We also know that Tulip knows the “real” Jesse and have to figure that she’s going to represent the apple of temptation here. Just how long can Jesse hold out?

Plus our vampire clearly wants to become Jesse’s BFF, and I’m all for that dynamic. Even possessed preachers need friends too, Geeklings.

Be sure to tune in to Preacher tonight at 10 p.m. on AMC and check back here Monday for my review.