Last week felt like the first episode of Preacher that wasn’t an introduction. Not saying that the prior two episodes had been bad, quite the contrary actually, but as of last week we’re starting to shape out this world that Jesse, Cassidy, and Tulip live in and there seems to be tons of rich back story to explore. I’m a sucker for back story (and front story… is that even a thing?) especially when it helps flesh out characters. I think the reason why a number of shows fail to take off is because they present us with bland characters who don’t deserve our time. No one could accuse Preacher of that. Three episodes in and I want to know everything about every one. What was that heist Jesse and Tulip were pulling? Who killed Jesse’s father? How did Cassidy become a vampire? What’s going on with Eugene? Are the Men In Black Cowboys really from heaven? Why is Rorschach in this?

Based off of this weeks trailer it seems that things are really going to start taking off for Jesse. Just when we thought we had caught a glimpse of who Jesse used to be, in his pursuit for revenge with Tulip, he was able to reign himself in and re-focus himself on being a “good man”. Obviously we the audience know that there’s no way he can keep this up all season, because of compelling television reasons, but I’m curious to see how long he can hold out. You have to believe there is going to be something specific that causes him to go off the deep end, and I don’t think we’re going to be seeing that tonight. From the looks of things it appears that Jesse is embracing his powers to do good in the world. Yes the term good isn’t black and white, beating up a would be pedophile isn’t necessarily the best way to go about things buuuuuuuuut it brings in positive results?.What’s a little line blurring?

I’m not sure what to make about the girl running away from all those men but if we’ve learned anything about this town in our short stay, it’s that it’s not a very good place. It could just be me but I got this Fringe feel while watching the trailer. Almost as if Preacher is going to start presenting a case of the week type scenario. Keep the main story at the forefront but give Jesse something to focus his powers on allowing him to explore them more as well as raising the possibility of temptation. 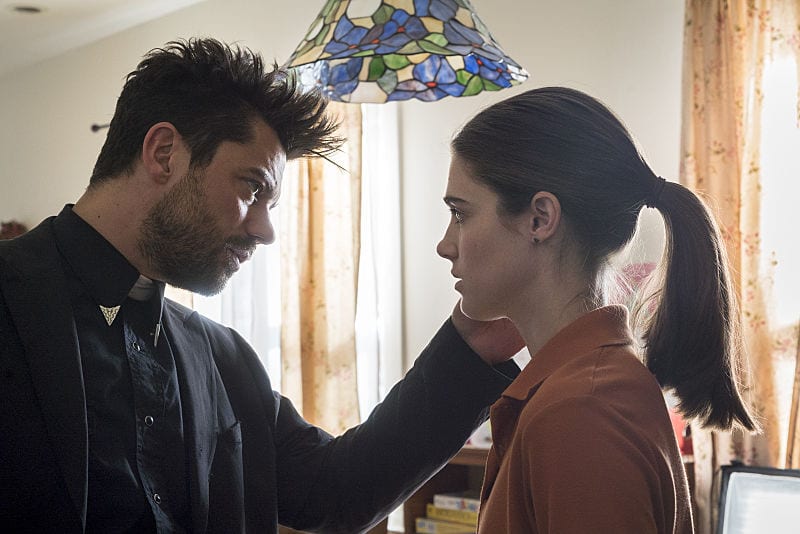 Cassidy has seemingly made a deal with the Men In Black Cowboys from Heaven (which oddly enough is going to be the title to my first album) to bring Jesse to them. I find this whole “deal” a bit funny especially from Cassidy’s point of view. Jesse’s power clearly intrigues him (despite the fact that it makes him admit to being Justin Bieber fan), and you would think a vampire would want to exploit that power. Maybe get the hunters off his back or something? I’m not sure if I fully trust Cassidy on this one, but I don’t really trust our boys from Heaven either. Yes, I believe that they want to contain the space demon but what does it mean for Jesse once it’s removed? This thing had a habit of exploding people when it wasn’t a good fit, one has to assume that leaving a good fit could be a tad bit messy too. And what happens to Cassidy? Are we to believe that they’ll just let him walk away? I’ve watched/read far to many stories to know that never happens.

This week we also look to get to know a little bit more about Donny’s boss. You know the guy who likes to listen to cows getting slaughtered as a soothing background music. Exactly. We see that Jesse and him will have some interaction this week and maybe we’ll start to learn a little more about his place in the town. Something tells me that he’s a string puller and might have some sort of connection to the man who got Tulip’s map. Just a theory.

Speaking of Tulip, don’t expect her to give up on Jesse and the revenge tour any time soon. At someone point Jesse is going to cave and while we wait for that to happen, Tulip will be pushing all the buttons she can in order to get what she wants.

There you have it Geeklings. What do you expect from this weeks episode of Preacher? Sound off in the comments below and be sure to check back tomorrow for the episode review. Happy viewing!