We have just two months until Pokemon Ultra Sun & Ultra Moon come out, so new details about these games are going to start coming much more often. And that brings us to the recent Nintendo Direct presentation that aimed to show fans how the games were coming along and what they can expect. In short, be prepared for great things!

So let’s continue our Pokemon Ultra Sun & Ultra Moon ULTRA Update with these new story details, new Pokemon and confirmation one of our big expectations from last time!

As we discussed last time, Ultra Sun & Ultra Moon will not be sequels to Sun & Moon, but rather a retelling/ reboot of the predecessors. It might sound harsh, but think of Sun & Moon as glorified Betas and these are the true versions with a lot of new story as well as new areas. As I pointed out last time, the map of Alola has some hidden key differences, some of which were new beach areas on Melemele and Akala Island. Well in this new trailer/ presentation, we get to see one of those surfer beaches. Additionally, we see something referred to as the Pikachu Valley, which could be part of the shallower lake we noticed last time around Akala Island.

Though it’s not just locations that have changed and become more complete this time around, but also the story as a whole. From start to finish, the story will have a lot of differences. We already knew that Necrozma would have a larger role in this game (more on that in a moment), but here we see that even how you meet your Starter Pokemon is changed. In Sun & Moon, you were presented your starter in a rather formal setting; but here it seems you will choose your starter on the fly to help take on a wild Yungoos.

Additionally, by looking at a recently released promotional poster for the game, it looks as thought some characters might have different roles as well. For example, Lillie is holding a Pokeball and looks much more confident than her early Sun & Moon counterpart. Additionally, we see the always smiling Hau looking rather upset/ determined; and let’s not forget all those dark shadows cast on our two protagonists. Though the most noticeable change is the mysterious figures in the back of the poster who can be anything from new leaders of existing evil teams or a completely new group of antagonists! 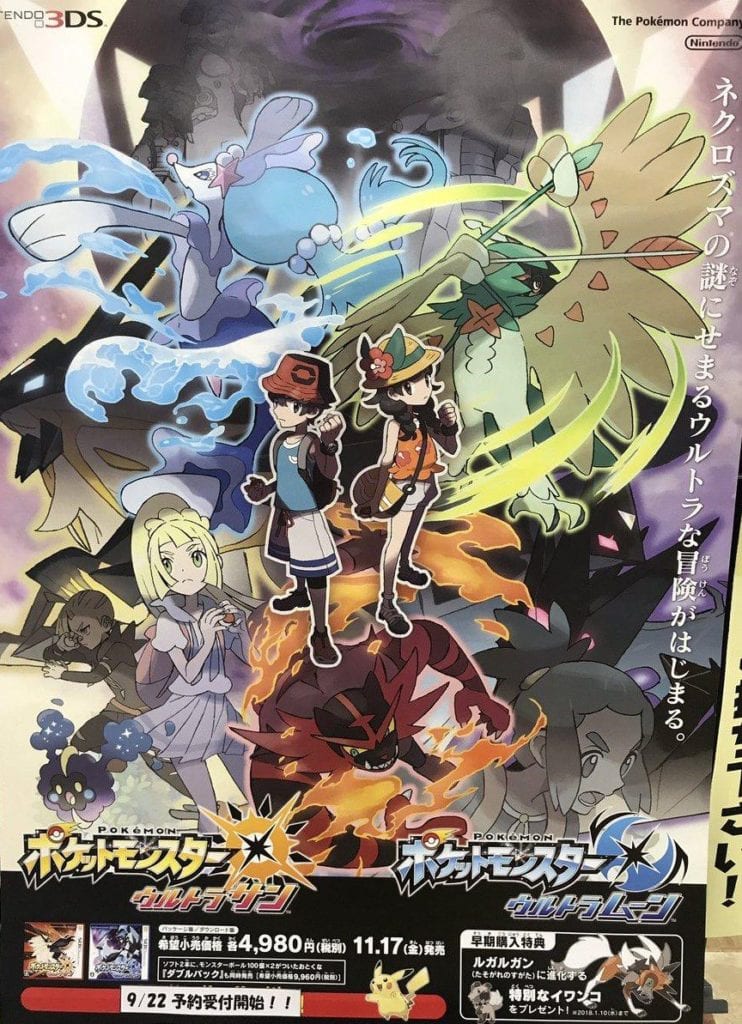 We’re also starting to get new details about the Necrozma and Solgaleo/ Lunala fusions; and like everything else with this game, it looks like the nature of this fusion was a lot darker than we first thought. Last time we hypothesized that Necrozma would shed its armor and reveal a purely light-base/ prism form inside. Now whereas these new details don’t necessarily disprove the presence of this prism form, it does shatter our thoughts about this being a friendly fusion.

In the Nintendo Direct presentation and trailer, we see Necrozma and the legendaries fighting pretty savagely and then culminating with Necrozma absorbing the legendary. Pair this with the quick shot of Necrozma crushing the heads of injured Solgaleo and Lunala, and this is getting REALLY dark! During the Nintendo Direct mini-conference, Necrozma was described as “the Pokemon that steals light” which would add some meaning to all the shadows and darkness we see in the previously mentioned poster. Though for now, let’s talk more about these two new forms in general. 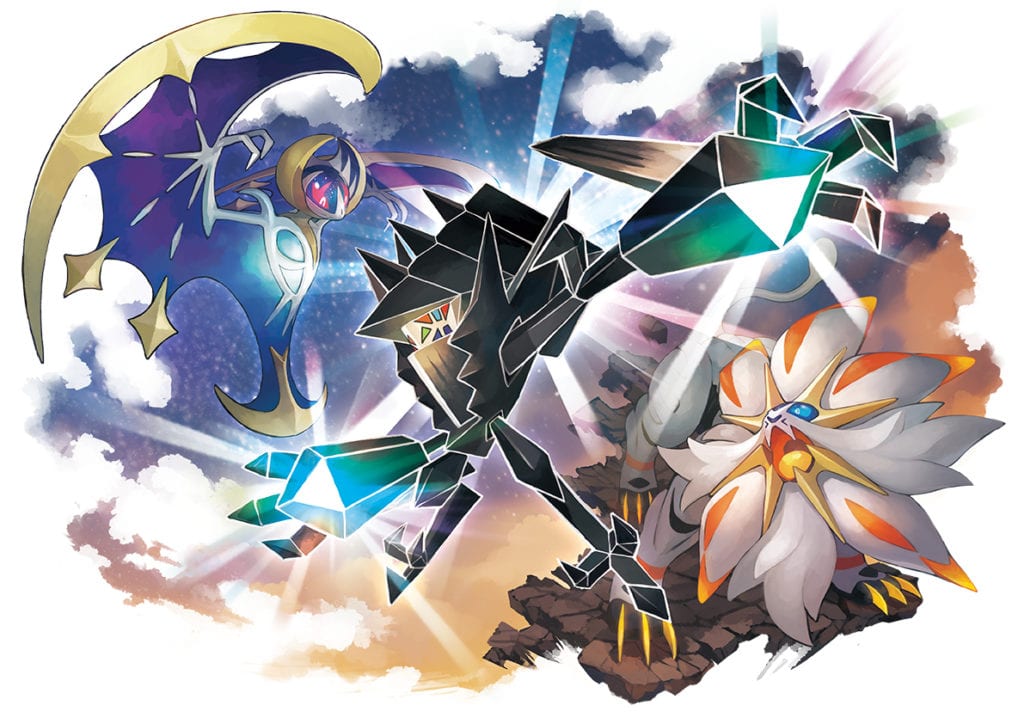 Ultra Sun & Ultra Moon might not be a sequel like Black & White 2, but it certainly is using a similar fusion dynamic as Kyurem Back and Kyurem White. Though as I mentioned earlier, rather than this fusion needing a Gene-Splicer, Nezcrozma will capture the sunlight of Solgaleo to become Dusk Mane and the moonlight of Lunala to become Dawn Wing. Now some might think the names should be reversed (ie: Dawn Mane since Dawn has more to do with Sun/ Solgaleo), but as I’ve already said twice now, these fusion result from Necrozma absorbing that light. So “Dusk Mane” applies to the Solgaleo fusion as daylight has now faded – just like Dusk.

Though ‘new forms’ aren’t the only additions to this game it seems as two brand new Ultra Beasts have been revealed – UB Burst and UB Assembly. Now this new reveal changes a popular theory from Sun & Moon that the Ultra Beasts were based off of the 7 Deadly Sins. With these two new Ultra Beasts now in play – and us out of Deadly Sins – it looks like Ultra Beasts aren’t exclusively 7 Deadly Sin creatures but rather just Different Dimension unevolving Pokemon – or as Shigeru Ohmori stated, ‘based on invasive species’. Though what invasive species a clown and wall represent is beyond me. Hopefully Ultra Sun & Ultra Moon shed some new light on what Ultra Beasts actually are because if they are just ‘Different Dimension Pokemon’ there should be A LOT more of them.

Artistically though, UB Burst and UB Assembly fit in perfectly with the creepy, otherworldly aesthetic other Ultra Beasts have. UB Burst looks like Pokemon’s attempt at making an ‘IT’ Pokemon while UB Assembly seems to be a mass of possessed bricks. As of the moment, we don’t know their stats, abilities, typing or even actual names. All that we know is their look, Codenames and the fact that UB Burst will be an Ultra Sun Exclusive and UB Assembly will be an Ultra Moon exclusive.

It’s been a while since we first learned of Lycanroc’s new form, but it seems now we finally have some new substantial details. Lycanroc Dusk Form will indeed only be obtainable via evolution at a certain time (Level 25 between 17:00 and 17:59), but also via a specific Rockruff. This Rockruff will be available as a gift in Ultra Sun & Ultra Moon before January 10th. Now each Rockruff will be awarded at Level 10 and with the Focus Band attached, but each version will get a slightly different moveset as the one in Ultra Sun will know Fire Fang while the one In Ultra Moon will know Thunder Fang.

Additionally, Lycanroc (regardless of which form it’s in) will get a new Z-Move called Radial Edge Storm. The move requires Lycanroc to already know the move Stone Edge, but this attack will have an incredible secondary effect that’ll come in handy both in game and in the meta. Radial Edge Storm’s secondary effect eliminates any and all terrain effects. Throw in the fact that this specially distributed Rockruff will have the ability Own Tempo – which prevents confusion – and this will be an incredibly powerful addition to the team! 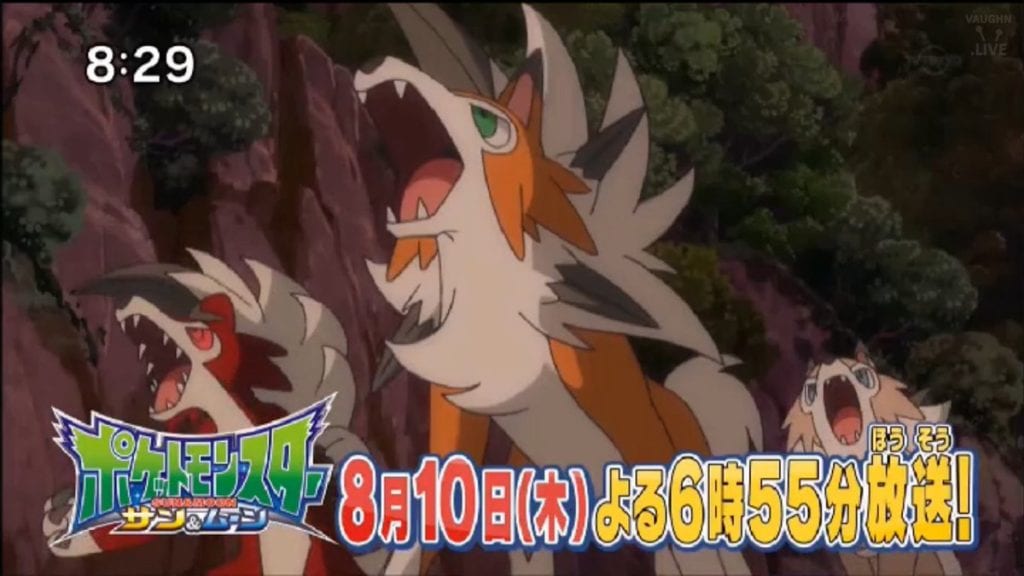 Closing out, we have some pretty exciting news in the promotional department. Digital downloads of the game will give players 12 Quick Balls – which is pretty lackluster – but if you order the digital console versions of Pokemon Gold and Silver on September 22nd, you will get the Legendary Pokemon Celebi to transfer to your Ultra Sun & Ultra Moon game! Now THAT is a bonus!

Overall, this looks to be the darkest Pokemon game yet, and I’m very okay with that! Many will say “Pokemon is a kid’s game”, but you have to remember most of the people who grew up with Pokemon are now young adults. There is nothing wrong with there being a little extra darkness/ realism in the games. If anything, that just makes it all the more rewarding when we get our happy ending! Now I’ve been critical of Pokemon Sun & Moon and even X&Y because neither felt like finished games. But I loved everything about Omega Ruby & Alpha Sapphire, and Ultra Sun & Ultra Moon look to give the same great – and complete – experience! So I’m certainly picking up a copy November 17th when it hits stores.

Until then, stay tuned for our next Pokemon Ultra Sun & Ultra Moon: ULTRA Update