Our Pokemon Ultra Sun & Ultra Moon ULTRA Updates might over, but last week some “unofficial” news dropped in the wake of some copies of Ultra Sun & Ultra Moon being released for review. The games were completely data-mined and several unannounced Pokemon were discovered. Needless to say, this was VERY heavy spoiler territory and was done in a less than great way, so I didn’t cover it. Today though, Pokemon has released one final super short trailer ahead of the November 17th release.

Though knowing what I already know about the leaks last week, it’s hard to tell if this trailer was their way of ‘steering into the curve’ with the release or if this was an originally planned teaser that got completely ruined with the news. So if you read the spoilers, then you already know what’s coming. If you haven’t, then keep reading. With any luck, you will be able to have the excitement of this reveal that I will no longer have because it was spoiled.

Way back in our 1st ULTRA Update, I hypothesized that there’d be a 4th Necrozma form in this game due to the odd star-shaped Pokemon-like image on the covers. Up above what we would later learn to be Duck Mane and Dawn Wing Necrozma, we see a four-pointed star with eyes. Additionally, with this game seemingly being originally dubbed “Pokemon Stars”, it made sense for this to as well be a hidden Legendary Pokemon, the – as I called it at the time, “Unarmored Necrozma”.

Well this new trailer now confirms this theory as the apparent ‘Ultra Necrozma’ makes its first partial appearance. From what we can see from the trailer, this evolution is similar to Mega Rayquaza/ the Primal Evolutions in that it’s achieved in battle, but this time it’s from using a Z-Move called “Ultra Burst”. As of the moment, it’s unconfirmed if ‘Ultra Necrozma’ will retain this new form after the move is used or just for the duration of the attack animation. Though if it does stick around, its Stats are sure to be insane as this is an evolution of an already ‘empowered’ Necrozma – as opposed to base form.

The other focus of this trailer is that Ultra Sun & Ultra Moon will have new Move Tutors. Again, considering this is an aspect of the game that has been around for Generations, it’s odd that this was included in an announcement video. Perhaps this will be tied to being a Battle Agent or Mantine Surfing – or both.

Again, I’m uncertain if this was a video that was completely harpooned by last week’s spoilers or if it was just hastily put together to make up for those spoilers. Whatever the case may be, the reveal did come with some super cool art that gives us a better look at this Ultra Necrozma. So that at least makes all this worth it. Pokemon Ultra Sun & Ultra Moon releases this Friday, November 17th! 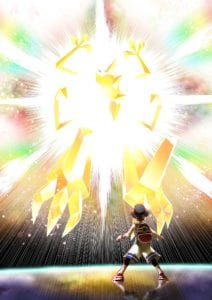