We all know how it feels to fall down the Netflix rabbit hole. One minute, we’re watching a series or film we’ve been looking forward to and a few hours later we’re tuned into something we’ve never heard of and totally intoxicated by it. From there, we click through Netflix suggestions like it’s our job.

It’s not all random either, and yesterday, Netflix came out with a science behind some of the most common binges ever – superhero (or villain) ones. It came as a bit of a surprise to us that one in eight Marvel television viewers hadn’t watched any comic book based content prior to their first heroic binge.

Todd Yellin, VP of Product had this to say about genres.

‘At Netflix, we know genres are just wrappers, which is why we work hard to create algorithms that help members break these pre-conceived notions and make it easier for them to find stories they’ll love, even in seemingly unlikely places.’ 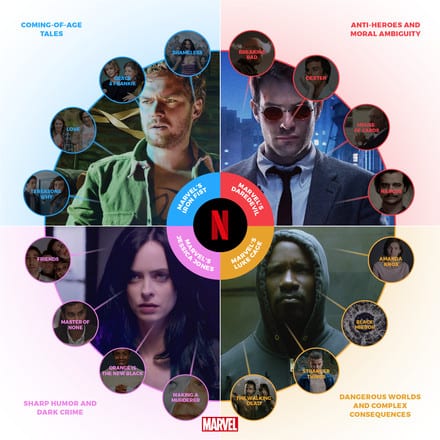 They went on to say that the streaming service discovered interesting patterns when linking new Marvel viewers to the series of their choice. They broke it down into subcategories with points of interest and emotions in chosen shows that linked viewers to Marvel’s Daredevil, Iron Fist, Jessica Jones, and Luke Cage.

Each of the four television shows had the shows or specials that fans watched that led to that ‘perfect’ Netflix suggestion. It’s an interesting thing to see the gateway laid out in front of you.

From the Netflix announcement, these are the categories and what helped determine the suggested Marvel show.

Anti-heroes and moral ambiguity lead viewers to Marvel’s Daredevil.
Stories that dabble in life’s grey area heighten viewers’ senses for Daredevil, like the political turmoil of House of Cards and the thin lines of family loyalty in Bloodline. As do characters who blur the lines between vigilante and villain, like Walter White’s entrepreneurial antics in Breaking Bad and Dexter Morgan’s homicidal heroics in Dexter.

Sharp humor, strong females and dark crime draw watchers to Marvel’s Jessica Jones.
It’s Jessica Jones’ sharp wit that makes her binge-worthy. Series with smart humor, like Master of None, Friends, and John Mulaney: The Comeback Kid, draw viewers to Jones as do stories with strong female leads, like Orange is the New Black. A nod to her detective roots, series immersed in dark criminal worlds also do the trick, like the psychological thrill of Making A Murderer.

Dangerous worlds and complex consequences direct viewers to Marvel’s Luke Cage.
Shows that expose the dark side of society draw viewers to Luke Cage, like the question of guilt in Amanda Knox and the examination of technology in Black Mirror. Similarly, series immersed in dangerous realms, like a cartel-ridden Medellin in Narcos and a zombie-filled Atlanta in The Walking Dead, lead watchers to Cage’s world.

Edgy coming-of-age tales steer watchers to Marvel’s Iron Fist.
Grit isn’t the only path to a comic binge. Edgy coming-of-age series, like Love, Shameless and 13 Reasons Why bring viewers to Danny Rand and his transitional tale from orphan to crime fighter. The passage from warrior to winner also struck a chord with viewers courtesy of Ultimate Beastmaster.

You can view the release in its entirety here. According to the chat above, what would you have been watching prior to the herioc binge that led you to Marvel on Netflix? Let us know.