Mandy Moore’s face goes through the ringer on This Is Us all of the time. Excluding Sterling K. Brown’s recent flash-forward, she’s the only Pearson family member who has to be aged on a regular basis in order to participate in the present day timeline. Earlier this year, Moore revealed that she had gone through the aging process 20 times in season 2 alone. On top of that, she goes and gives phenomenal performances every week with all of the makeup and prosthetics on.

Moore has also provided her Instagram followers plenty of looks behind the scenes at the hours-long process of getting into old Rebecca mode, which she told Refinery29 takes “about three and a half hours.”

To put it shortly, the woman is a trooper and despite the grueling process, she is honored for the opportunity.

“I love that I’m given this opportunity to play this character from 25 to 68. That’s so unheard of. So I don’t begrudge the process that comes along with it.”

So, as an avid follower of Moore’s I was excited to see her back in the This Is Us makeup chair when I came across her most recent video, but I quickly realized it was not her average BTS video. In fact, the video showed Moore having a proper mold of her face made for the This Is Us effects team and it involved basically her entire face (mouth and nose included!) covered in blue and green goo for an entire hour! You have to watch it for yourself – check it out below!

Mandy Moore having a mold made of her face:

Me, watching Mandy Moore have a mold made of her face:

The official This Is Us Twitter account also tweeted the video out and fans were quick to echo my sentiments. 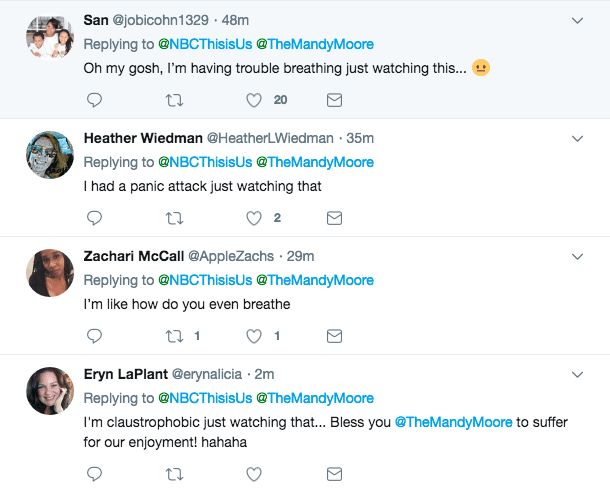 Long story short, Mandy Moore is a queen and her portrayal and dedication to playing Rebecca Pearson through the decades deserves all of the recognition.

This Is Us returns to NBC this September!