If you are looking for a fun-filled adventure film for the entire family to join, you absolutely must check out this one!

Howard Lovecraft and the Undersea Kingdom is an animated feature film that follows the story of Howard Lovecraft as he journeys to the alien world of Yuggoth to write his fathers wrongs… or be trapped forever in the clutches of a dark and powerful Old One.

You can check out this incredible trailer for the film below:

I will for sure be adding this one to my watch list!

For all of you CWverse fans out there, you may recognize Kiefer for his notable appearance on Legends of Tomorrow as the son of Rip Hunger, played by Arthur Darvill.

In addition to Mark Hamill, he is also joined by some of the premier names in Hollywood horror and fantasy, including Ron Perlman (Hellboy), Jeffrey Combs (The Re-Animator), and Doug Bradley (Hellraiser). Film legend Christopher Plummer also stars.

The film has already won a few accolades, taking home Best in the Festival: Scifi at the Hot Springs International Horror Film Festival and Best Director at FearNYC!

Howard Phillips Lovecraft was a renowned author, still famous for his influential works. The Undersea Kingdom takes place when Howard was only seven years old, long before he found acclaim as one of the most significant 20th century authors of horror fiction.

This exclusive clip features Howard Lovecraft taking with the rule of the Undersea Kingdom on the planet Yuggoth, Dagon. Scott McNeil voices Dagon and was also the voice of Wolverine in X-Men: Evolution.

Howard Lovecraft and the Frozen Kingdom was produced by Michelle O’Reilly. The art director and senior modeler is Gary Yuen with Chris Trinh as a senior editor and CG supervisor is Martin Bastian. The film is available now through Shout Factory and the third feature is currently in production. 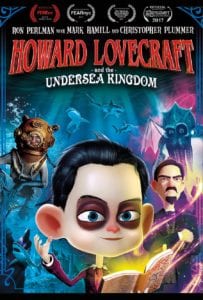