In addition to Friday the 13th: The Game getting a physical game disk for Playstation 4 and Xbox One, released on Friday October 13, we also have received news that a new parch is in the works for the game.

The best part about it – it will contain our biggest update yet!

Gun Media just launched a brand new official website for Friday the 13th: The Game, the game’s developers are offering up a whole bunch of upcoming content teases.

For starters, we know that there was recently an announcement that they would be designing smaller, deadlier maps of all the current maps that we have available today. In addition to this news, we also will be gaining an entirely new and different map all together. Fans of the Friday the 13th franchise have begun speculating which location it will be.

Regardless of whatever map we will be getting – we are certainly excited for it. According to Gun Media’s Twitter page ‘it’s coming sooner than you would think’.

Along with the maps, a “Spring Break ’84” clothing pack will soon be available for all playable counselors, which will allow all of the counselors to rock bathing suits. Attire isn’t the only new thing that will be coming in regards to our Camp Crystal Lake Counselors – we are also going to be getting a couple new counselors based off of the actual movie characters and site locations. 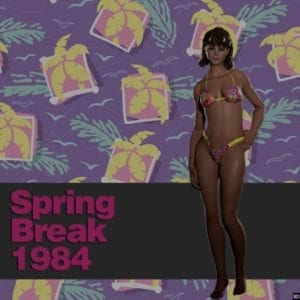 The most important news of all – a new playable Jason with unique kills will soon be coming! For quite some time, the official Friday the 13th: The Game has been teasing this whole “seven black dots, one blue dot” teaser that has been keeping fans guessing.

Some speculate this is a hint towards our new Jason. The ‘Jason’ from Part 5 is one of the characters that is not currently in the game, and what separated him from all the other Jasons (aside from the fact that in the movies the ‘Jason’ from part 5 was actually an imposter) is that his mask is different. Rather than the traditional red and white… it was blue and white.

Another bit of news that will come as a pleasant surprise to all gamers is that due to the volume of ‘rampant team-killing’, the creators of the game are eliminating weapon use against teammates in public matches.

In a preview for the next patch (via Reddit), Gun Media detailed the change, saying:

“The shotgun, machete, and other assorted weapons will no longer have any effect on friendly players. While team-killing was ‘designed to promote life-or-death experiences into each and every game you play,’ it’s become more of a Battle Royale scenario,”

As an active player of this game, I would have to say this is extremely frustrating and it takes away from me wanting to play in public matches. If I’m playing the game, my goal is to avoid Jason… I don’t want to have to worry about whether or not all of these public people want to work with me as a team or kill me. So for me, personally, this patch is incredible.

However, there are two exceptions to Friday the 13th’s new team-killing rules: vehicles and traps. You’ll still be able to kill fellow counselors while driving a car, and bear traps set by other counselors will still cause damage. Gun Media is also doing away with XP penalties for team kills via bear trap, warning players to “pay attention to placed traps.”

Which I agree, is completely fair. In real-life scenarios, you should always ‘look before you leap’.

The publisher notes team-killing will still be possible in private matches, “with the hope of better options in the future.”

“Our team believes that the ability to hurt other counselors is something that this game should have as it adds tension and requires players to make tough calls. However, we do not believe this should be a mechanic that is abused by players to the point where the vast majority of our current communications from fans are complaints of rampant/unwarranted team-killing/griefing/trolling.”

There have been no formal announcements in regards as to when this update and patch will become available, but we will keep you posted.

Friday the 13th: The Game is available for download on Xbox One, PS4 and for PC.

Home » Featured » Gaming: ‘Friday the 13th’ will be getting amazing updates – including a new Jason!