In two seasons of the Flash we have been introduced to some interesting characters. Some have been pretty faithful to their comic book inspiration where some have been so far off you had to create a disconnect in your brain so not to get sad. One of those stories for me was Grodd, on the CW The Flash Grodd is a test subject of Wells (Thawn) and General Wade Eiling. The two were trying to make serums to create a super solider, Wells was not found of the way Eiling treated their furry friend so he pulled the plug and kept the gorilla. We got several hints of the appearance of the well known Flash villain far before his first screen appearance.

It was never really discussed if Thawn saved Grodd from Eiling because of to his future knowledge that Grodd would be a good gorilla to have on his side in the future or if he was just found of primates. An undisclosed amount of time later the particle accelerator blew up and the dark matter combined with all of the tests that had been preformed on Grodd started the transformation into the super intelligent, telepathic, angry gorilla super villain we all had been waiting to see. Grodd saw Wells as his father, but continued to have a soft spot for Caitlin as she had been nice to him during his time at STAR Labs. When the team had finally discovered who they thought was Harrison Wells was really Eobard Thawn, Thawn used Grodd to keep them distracted while he finished his plan to get home. With the help of everyone Barry got away, but didn’t really beat Grodd, they just let a super villain gorilla ride away on a train because they were not capable of dealing with him at that moment. It always struck me as odd that he didn’t get into any more shenanigans, but its comic book TV what are you going to do?

Early in season two we saw Grodd reappear, with the help of Caitlin, Harry, and the location of a perfectly placed breach they sent Grodd to Earth two. This struck me as odd, why would Barry just send a big, crazy, villainous gorilla to Earth Two? We also had the encounter with Harry in the Reverse Flash suit that made us all concerned because he had mentioned a promise he had made him, and as far as we knew Harry had never met Grodd. That conversation was never brought up again, and I really don’t know if Grodd will ever be revisited on Earth Two or if our monkey business is done on the show. My absolute favorite part of anything we saw Grodd related was where they sent him on Earth Two, which if you are not a comic book fan probably wasn’t all that exciting. Grodd comes out of the trees to see a city with giant gorillas carved into the mountains. If you are a comic book fan I am sure you all went SQUEAK GORILLA CITY!?!?!? 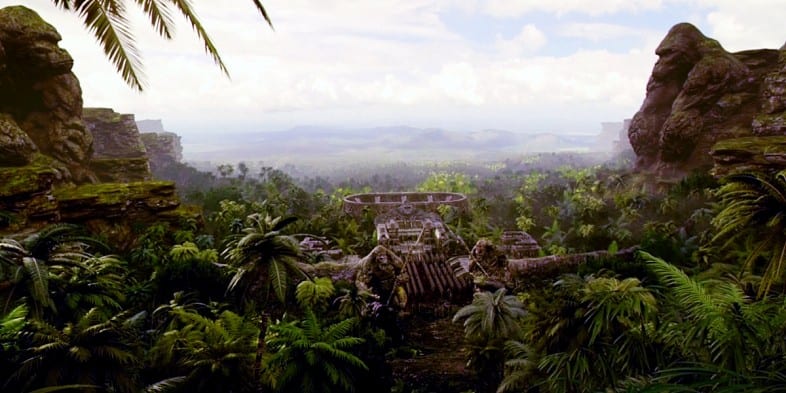 This is super exciting because in the comic’s this is where Grodd is actually from. Gorilla city is hidden from the world in the jungles of Africa, it is full of super intelligent gorillas. Though all the gorillas are super smart and evolved not all of them have super powers Grodd and one other gained their powers from a meteorite. So you are thinking great a entire city of  super villain gorillas, and I would respond, no silly not all super intelligent gorillas are bad guys! Most of them just want to remain hidden from us crazy humans and enjoy their little world. I would then respond to them that they should probably not have giant gorillas carved into the mountains, Google earth is always watching guys!! After some tricky business Grodd becomes King of Gorilla City, but decides that is not enough, he believes that humans take up too much Earth and are just nasty creatures, so goes on to the human world where he encounters the Flash. This starts the epic saga that is Super Villain Grodd.

Though typically Grodd is a Flash Villain he is too scary and powerful to only battle the Scarlet Speedster, he has gone toe to giant toe with The Justice League as a whole a few times and several individual members as well. Grodd is a giant gorilla who is also a super villain who sometimes wears a crown and a purple cape, so it is understandable that if not written correctly he could come off more funny then scary and did just that for several decades. A real world DC comics hero Geoff Johns brought the character back in 2001 and Grodd once again took his seat as one of the most terrifying creatures in the DC universe. Johns version of the character has less of that pure animal instinct like we saw in the flash and more like Hannibal Lecter style serial killer vibe, he enjoys mentally showing his victims exactly how he is going to rip them apart before he does. In the New 52 The Trickster tries to get in his good graces, but Grodd has no use for him and rips his arms off… Grodd has been a Flash Villian since 1959 and has been written by countless authors, some have made him scary, some down right funny. Grodd is a powerful foe that no one in the DC universe is ever excited to see show up.  If you know his comic history or just his tv appearance one thing is for sure, an angry telepathic gorilla is truly something that should be avoided at all costs, and please do not offer him a banana!