Three years ago, the world was introduced to the Flash. Season 4 of The Flash kicks off this coming Tuesday, and fellow Arrowverse Expert Jules and I decided to compile a list of our Top 5 favorite episodes in celebration of the show’s return.

Jules: While Caitlin struggled to deal with her growing powers and concealing Killer Frost, she found herself falling. I found this episode extremely touching and I love the fact that they had Cisco reach out to her, her original friend. It was also an extremely powerful moment when Barry managed to reach out to Caitlin, and stop Killer Frost from completely taking over.

Alyssa: I love when we see our favorite characters in a different way, and this episode was everything because we go to see everyone be something else. Barry was a coward, Joe was a lounge singer, Iris was a badass cop, Caitlin, Ronnie, and Cisco were all evil. We even got to see the return of Floyd Lawton who was a cop that couldn’t aim! It was great. Everything about this episode was amazing. I would watch an entire series that took place on Earth-2.

Jules: I was completely blown away with what the writers and staff did with King Shark. The CGI work and everything was fantastic. Even though he wasn’t in the entire episode, they did an extremely good job at implying that he was definitely there. It was also a challenge for Barry, as he never faced an enemy quite like King Shark before. Also, this was the episode where we finally saw Barry and Wally establish some sort of a relationship. It was incredibly sweet.

Alyssa: This is the first time that everyone is in the same place at the same time and it is something magical. Not only do we have our Earth-Prime heroes training against Supergirl (and failing miserably), we even get a face-off of everyone against Barry and Oliver when their minds get warped by the Dominators. Great moments, great fight scenes, just great.

Jules: Aside from the fact that this team up made me desire a Justice League themed episode, I love moments when Barry and Oliver come together. They joined forces to take down a powerful enemy. Although Barry foolishly tried to take down Bivolo on his own, Oliver didn’t give up on him and fought to get the ‘evil’ out of Barry.

Alyssa: Everything in Season 1 was leading up to Barry going back in time to save his mom. And then when he does, he lets her die because it’s the right thing to do. He can’t just change the past like that. That scene is truly heartbreaking. Not only do we have that, but then we have Eddie’s sacrifice, which came out of nowhere and once more destroyed our emotions. Then, we have a massive cliffhanger and have to wait until Season 2 to find out what happens! A fantastic season finale that delivered some of the best 20 minutes of television.

Jules: Zoom caused Barry such heartbreak and pain, so of course it was amazing to see Barry finally take him down. The episode title in and of itself was what really drew me in! I still get the chills when I rewatch episodes and hear Zoom say “Run Barry, run!”

Alyssa: Zoom proves just how absolutely terrifying he is in this episode. We had heard and partially seen just how bad Zoom could be, but nothing really prepared us for his fight with Barry. There really wasn’t much of a fight, and Barry is easily defeated. To top it off, Zoom then runs around Central, dragging along Barry’s broken body for everyone to see. The end of this episode was scary, but the beginning was really hilarious as Team Flash trained Linda to be Dr. Light. It’s the kind of lightheartedness you need right before you’re world comes crashing down. 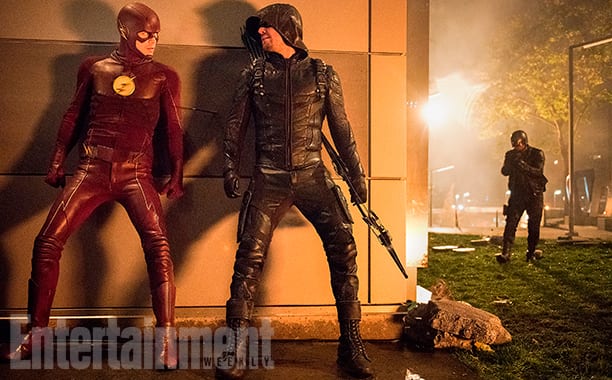 Jules: I am always a fan of the team-ups, but I was especially fond of The Flash themed episode. Barry was the one who essentially brought them all together, and I still love the brotherly moments he occasionally will have with Oliver. This episode had aliens, epic team ups, and valuable life lessons to be learned. I loved every bit of it!

Alyssa: This episode had me on the edge of my seat. Weather Wizard is an incredibly formidable opponent because he’s smart and crazy powerful. Barry is focusing on stopping him from destroying all of Central while Cisco tries to figure out how the machine he built to trap Reverse-Flash malfunctioned. Again, the last 15-20 minutes of this episode are the best ever as Team Flash essentially loses. Barry has to stop a giant tidal wave from leveling the city, revealing to Iris in the process that he’s the Flash. And we get the emotional exchange between Cisco and Wells right before he plunges his hand into Cisco’s chest and kills him. Thank goodness Barry managed to run back in time and get a do-over. My heart couldn’t handle the end of this episode.