According to Gentle Giant’s website, Negan is coming to San Diego Comic Con!  The exclusive bust is described as: 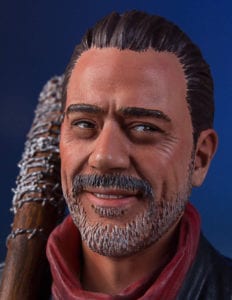 man you love to hate is coming out swinging! Negan is a charismatic, totalitarian ruler with an iron fist in the form of a baseball bat named Lucille. He knows exactly how to make an introduction, establish his rule, and widen his scope of control and dominance. There are no hidden secrets – you follow his rules, you live; you don’t follow his rules, you die. He is a man of his word. Take this bust home… like a champ! Designed, modeled and prototyped using top of the line 3D technology, this collectible mini bust is hand-cast, hand-painted and hand-numbered with a limited edition certificate of authenticity.”

Jeffrey Dean Morgan’s Negan is revered as one of the greatest television villains of all-time, now you can own him and his Lucille!

What do you all think? Does this capture Negan’s image? Let us know in the comments!