Echo Kellum is best known for his role as Curtis Holt on The CW drama series Arrow. In 2015, Kellum was cast in the recurring role of Curtis Holt, based on the DC Comics character Mister Terrific. Curtis is a technological savant/ inventor who works at Palmer Technologies under the supervision of Felicity Smoak and who becomes a member of Team Arrow. In April 2016, it was announced that Kellum would be promoted to series regular for the fifth season of Arrow, which will premiere in fall 2016.

I had the pleasure of speaking with Echo at this past weekends Heroes and Villains Fanfest New York\New Jersey about what we can expect from his character Curtis Holt aka Mister Terrific for Arrow season five and his future projects.

Michael Garone: Hi Echo! Let’s talk about your character for Season 5. Will we see Mister Terrific make his debut?

Echo Kellum: There is a very high probability that could happen this season. I really like what Wendy Mericle, our producer had said recently about Curtis that, if Felicity is the software, Curtis is the hardware. So you could see a lot more tech designs and cool things that the team could be using from Curtis. He will be taking on more of an aspect of Cisco’s role (from Flash). Also, being with Team Arrow trying to right the wrongs that are infiltrating the city, so it’s going to be a really interesting dynamic. 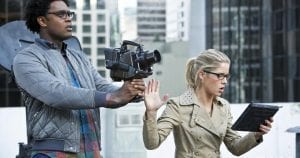 MG: Will Curtis be taking over Felicity’s role and will she be more hands-on for her Corporation duties?

EK: I don’t know if anyone can take Felicity’s role because she is such an integral part to the team. He’ll definitely be helping out and adding in some layers of tech that they need. He will be more of a compliment than as opposed to a replacement. 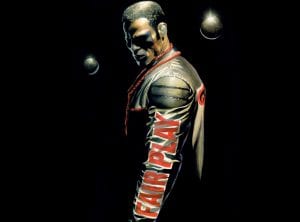 MG: Will we see a costume in Curtis’ near future?

MG: What future projects are you working on?

EK: I have two features coming out, one is called Girlfriends Day starring and written by Bob Odenkirk. It’s to be released February 14th 2017. The other is called Village People, directed by Paul Briganti.  Starring Brandon Scott, Aya Cash, George Basil and myself which we are trying to get to Sundance now. It was shot in Nicaragua. It’s a coming of age about brothers-in-law, Nicaragua, threesomes, and volcanoes. Catch me on Rick and Morty season three which will be four episodes or so and that’s going to be fun too!

Thank you Echo! Season 5 of Arrow has begun shooting and debuts October 5th at 8pm on The CW.